History lessons don’t have to be boring. But when they are, the problem usually lies with the execution of the presentation of the information. This happens to be the unfortunate circumstance of accomplished writer-director Armando Iannucci’s latest film, The Death of Stalin, which takes a satirical look at the death of Josef Stalin and the chaos that ensues as a result.

Iannucci is probably best known for his work on the critically-acclaimed HBO comedy series “Veep,” that has earned him, from 2012 to 2015, five Primetime Emmy nominations and two wins. His 2009 film, “In the Loop,” was also nominated for an Oscar for Best Adapted Screenplay.

So while The Death of Stalin may boast a reputable cinematic pedigree, it’s overall approach to storytelling is extremely limited. Characters must have personalities, interesting dilemmas and/or conflicts that captivate, yet this film rapidly introduces viewers to a multitude of characters in such bland fashion. There exists no good reason to watch them stumble through their overwrought plans, even if they’re portrayed by a talented cast.

Yet even if the film had fewer characters weighing it down (the list above is not an all encompassing one), it would still suffer. It uses unimaginative words rather than creative actions. The dark humor, while farcical in nature, has turns of getting too dark (remember this is a regime that maintained power with an absolute iron fist). It’s also incredibly dry, forced and contrived.

The closest character to succeed in being genuinely funny is Stalin’s boisterous son Vasily. He is whimsically played by Rupert Friend (“Hitman: Agent 47”). Written by Fabien Nury (responsible for the comic book the film is based upon) with input from Iannucci, David Schneider, Peter Fellows and Ian Martin, it’s arguable the uneven nature of The Death of Stalin is due to conflicting creative voices.

Sure, it could be said The Death of Stalin is niche cinema and not really meant for the wider, ordinary movie-going audience. That, however, doesn’t excuse it from playing so poorly. It’s an interesting story, but the characters underwhelm with comedy that is more miss than hit, even though they’re acted competently. It’s a shame that the only great death I will distinctly remember from The Death of Stalin is the loss of my precious time (106 minutes worth). 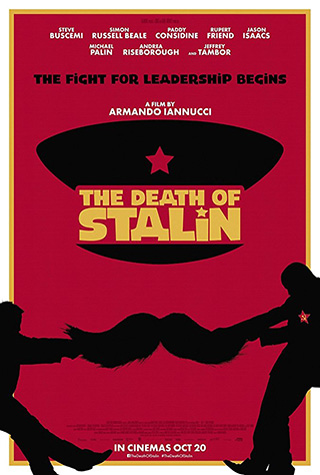