What is the cost to become beautiful? To be considered beautiful? Deep(ish) questions like that usually reside in dramas, but they can also be thoughtfully explored in comedies. It is this subject (among others like friendship and self-worth) that comedian and actress Amy Schumer tackles in her new film, I Feel Pretty.

Although she stumbled in her follow-up “Snatched,” Schumer is still an in-demand actress since her big screen debut in the 2015 box-office smash “Trainwreck.” Like many stand-up comics, she has built her brand of crude humor on observing the world and self-deprecation, and it is again these tools (mostly the latter) she uses as her character’s inspiration.

Schumer plays Renee, a single New Yorker who struggles with self-worth and acceptance of her physical appearance. That all changes when, after experiencing an excruciating concussion while working out, Renee suddenly sees herself as sexy, brilliant and all-around awesome even though her physical appearance hasn’t changed. Basically, writers and first-time directors Abby Kohn and Marc Silverstein (the writing duo behind “The Vow” and “How to be Single”) get clever with the “wish-granted” premise like we’ve seen before with “Liar, Liar” and “Big” (which the latter is referenced in the movie). And for most of the film, it works rather effectively.

The “new and improved” Renee finds soaring new opportunities at her job, a fictional beauty empire called Lily LeClaire, and potential romances with nice guy Ethan (played with such understated charm by Rory Scovel, “The House”) and bad boy Grant (Tom Hooper, “Black Sails” TV series). But the engaging performances don’t end there. Michelle Williams (“All the Money in the World”) provides a whimsical, yet standout performance as Avery, one of the heirs to the LeClaire company founded by her grandmother Lily (Lauren Hutton, “The Joneses”). She also serves as one of the film’s proxies (as does Emily Ratajkowski) that people who society deems as beautiful are more insecure and troubled than they appear.

This of course brings us back around to the film’s premise of determination and confidence and other personal dignifiers and Renee. Schumer gives a well-rounded performance that is coaxed with affable spunk, uber-positivity and sympathy. And even though Renee ultimately gets what she wants, viewers are reminded that the grass isn’t always greener on the other side. That said, the moment Renee learns this life lesson is where the film loses a lot of its punch.

A climax that should be profound feels rushed and further muddles the movie-magic of her concussion and experiences afterwards. When Renee becomes “new and improved,” she remembers who she is, but forgets how much she hated herself. But when Renee becomes herself again, how is it she remembers only life as the “new and improved” Renee? Also, much of the message behind the film’s first two acts is unfortunately pushed aside for the sake of a laugh and a clean end.

Regardless of the mystical murkiness or the mostly misthought resolution, the movie provides enough amusement during its 110 minute run (although not of the laugh-out-loud variety) to forgive its faults. I Feel Pretty is, after all, a movie with a mission — it attempts to reveal universal truths and complexities on femininity, masculinity and self-esteem. A timeless message, no matter ones age, gender or funny bone size. 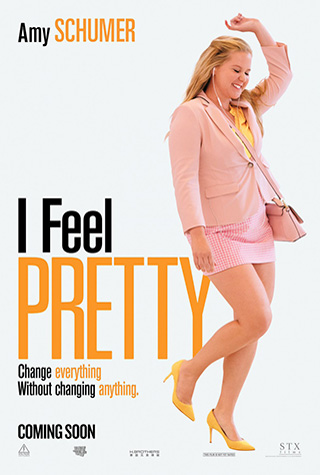