Some romantic comedies can be conventional in nature and not really want to invest in anything substantive beyond the familiar follow-the-dots formula of lightweight lunacy. In director Christian Ditter’s romantic romp How to be Single the gloves come off and are thrown in an entirely different direction. Sure, one can applaud Ditter for not hanging any hats on the standard blueprint of comical romanticism because How to be Single does strive to show some distinction in how to define one’s self (most notably young women) outside of confining relationships. So certainly the messaging is a breath of fresh air in terms of the female empowerment viewpoint about being able to spread your wings and go with the flow in affectionate independence without crippling expectations. Still, it is too bad that the film fails to capitalize on such an ambitious premise and simply squanders into a flaky and flaccid farce without any considerable impishness or insight worth the exploration into urban dating and romance.

How to be Single is based upon the novel by Liz Tuccillo. Screenwriters Abby Kohn, Marc Silverstein and Dana Fox try to scramble and pinpoint each of their New York City-based female protagonists with colorfully anecdotal outlandishness but the whole affair comes out disjointed and aimless. The drifting between dramatic effect and comical shtick have all the legitimate balance of half a see-saw . The wacky bits that are cobbled together can be considered a hit-and-a-miss but the film is somewhat entertaining when it lets loose in nonsensical naughtiness.  The element of seriousness, however clumsily executed, simply fails to convey the story’s thirst for the group of gals’ search for off-the-wall self-discovery and self-realization.

In a twisted yet refreshing way it is a gender chucklefest that turns the table and favors the girls from their perspective. These Big Apple babes get to sample the assorted goods (or in many cases the assorted bad) as they bounce from one insufferable guy to the next without skipping a beat of guilt. The movie does showcase these obnoxious suitors thus giving automatic sympathy to the “love ’em then leave them” ladies as they venture into the realm of unpredictable relations. Naturally there is a subtle message that states whatever is good for the gander should be good for the goose as well. After all, how many times have we seen Neanderthals plow through hordes of bimbos without consequence yet plenty of indifference? Thus, the gal pals in How to be Single set to strut their indifferent stuff as well.

The story unfolds as the aforementioned quartet of young women engage in their various misadventures on the dating scene. Pretty paralegal Alice (Dakota Johnson, “Fifty Shades of Grey”) arrives to the big city on a therapeutic mission to take a break away from her exasperating college sweetie Josh (Nicholas Braun, “Poltergeist”). Well, Josh has adjusted quite nicely with her away so the reality has set in for Alice to move onward. Co-worker Robin (Rebel Wilson, “Pain & Gain”) is the meaty-boned mentor determined to snap the disillusioned Alice out of her funk and show her how to take charge and enjoy the benefits of playing the field and not being apologetic for the carefree party-hearty times awaiting. Robin is big and brassy and does not mind playing the role of a sexual sledgehammer out to canoodle and conquer. Basically, rabble-rousing Robin is the dictating diva of debauchery and wears this bombastic badge with honor.

In addition to Alice’s and Robin’s animated exploits, the other two in this targeted foursome are Meg (Leslie Mann, “Vacation”) and Lucy (Alison Brie, “Sleeping with Other People”). Meg is Alice’s sister and an OB/GYN whose craving for a baby big time has her thinking about taking measures to satisfy her quest for motherhood via in vitro treatment. What choice does Meg have especially with no man in sight to give her that treasured bundle of joy? Soon, Meg will realize the opportunity to cozy up to a companion that steps in at the last minute in her decision-making for infant gratification. As for Lucy, she is attractive but frustrated in her ability to draw the attention of bar owner Tom (Anders Holm, “The Intern”). Importantly, the irony of Lucy’s profession as a dating app analyst does not give her an inside track to claiming Tom or any other available guy on the market.

Unfortunately, How to be Single is annoyingly jittery and woefully generic. The characterizations all feel synthetic and the contrived dilemmas for how these young women cope with men of uncertainty, reluctance and absurdity fall flat. We are reduced to rolling our eyes at the manufactured trivialities of each woman’s struggle with sex and self-worth. The humor seems forced and flavorless with the exception of a few ridiculing moments here and there. The bonding methods, given the energetic playground of New York City as a backdrop, are rooted in blandness. Ditter never digs into the authentic emptiness of his leading ladies while only managing to provide off-kilter scenes of silliness and sorrow that are cumbersome and tired. He could have tackled the concept of female empowerment with a more sharpened punch but the material is too lazy and simplistic to give this flimsy feminine fable any subversive resonance.

Overall, How to be Single has no coherent conviction and should be dismissed as a lacking upbeat dud. The cutesy teacher/pupil paring between Wilson’s Robin and Johnson’s Alice is sketchy and played out to tepid exhaustion. Wilson, often situated as the overbearing hefty harlot with go-for-broke exuberance in the popular “Pitch Perfect” movie series, is reduced to the same kind of boisterous shtick that feels more tedious than it does as a ticklish treat.  Wilson is uninhibited in wackiness and to a certain extent that is her consistent comedic appeal but her antics here are undeniably far-fetched. Johnson, Mann and Brie are the so-called lookers but bring nothing of interest or introspection to the table. At least Wilson’s Robin shows some glimpses of vulnerability despite her perceived skill at manipulating a series of male morons.

Relentlessly choppy and toothless, How to be Single is sentimentally hollow and squanders the opportunity to give a decent observational edginess to young women and their continued dating woes matched by a lost sense of personalized purpose.  One would be better served conducting random online searches at Match.com. 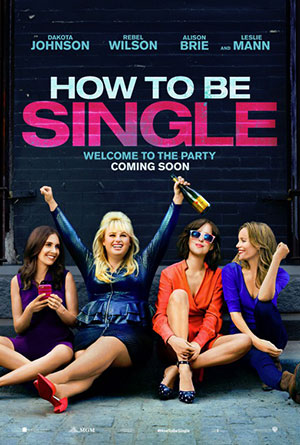