For the most part, hard luck familial dramas have the potential for being notoriously manipulative on an emotional scale. However, when done remarkably well — with the right precision of pathos and truth — such melodramas can resonate and overcome their soapy constraints. Director/co-writer Jake Scott (“Welcome to the Rileys”) oversees such a one with American Woman, an authentic and affecting blue-collar, family-related fable that captures the heartbreak and despair of a broken woman on the edge of hopelessness. Thoroughly probing and introspective, the film boasts an incredible, career-making performance by Sienna Miller (“The Catcher Was a Spy”). Miller’s solid turn as a beleaguered soul in tortured limbo is so good, in fact, it is worthy of Oscar consideration.

Miller stars as Deb Callahan, a 32-year old low-paid retail worker who happens to live with her 17-year old daughter Bridget (Sky Ferreira, “Elvis & Nixon”) and Bridget’s infant son Jesse. Deb is what one would call a free spirit (or a loose cannon to others) on the prowl within her Pennsylvanian small-town community. Deb is a chain-smoking, acid-tongued shrew with a most questionable reputation. At age 16 she gave birth to Bridget and has served as somewhat of an embarrassment for her Irish Catholic family over the years. Further, Deb is dating a married man and can care less about flaunting it around town. Yet regardless of Deb’s antics, it is clear she is devoted to her daughter, offering her unconditional love and support.

Things take a turn for the worse for Deb when Bridget asks her to babysit her son Jesse and never returns home. With alarm bells ringing, Deb consults her older sister Katherine (Christina Hendricks, “Fist Fight”) and her mother Peggy (Amy Madigan, “Rules Don’t Apply”) about her daughter’s disappearance. Deb even stormtroops her way to Bridget’s slacker ex-boyfriend’s house (the father of her grandson) for information. Finally, the police are notified. It is official . . . Deb is finally pushed to the brink of self-destruction in a different capacity.

Feeling defeated and depressed, Deb lashes out at Katherine and company accusing them of thinking they are better than her, until ultimately Deb’s suicidal tendencies get the best of her. The reality — it appears — is that Deb is left alone with the task of raising her baby grandson Jesse, something she is wholly unprepared for.

In the ensuing years, we are privy to the continued struggles — as well as temporary triumphs — that befall Deb as she mothers Jesse despite the lingering agony of losing Bridget. The downfall moments include Deb’s decision to become a kept woman for an abusive live-in boyfriend. She has, nonetheless, become closer to her family and even enrolls in community college to better herself. Also, through Katherine’s encouragement Deb is able to strike up a reasonable relationship with Katherine’s husband Terry’s (Will Sasso, “Super Troopers 2”) co-worker Chris (Aaron Paul, “Eye in the Sky”). Things seem to be improving for the once dejected Deb, but as that saying goes, “If it were not for bad luck then there would not be any luck at all.” Deb has not gotten over her emotional detachment quite yet. Nevertheless, we witness how much stronger and confident this wounded woman becomes, even though all the chips still do not fall into place.

Riveting and utterly touching, American Woman is a powerful observation about troubled femininity and the growth process it takes one wayward woman to arrive at her independence in the face of extreme mental turmoil. Miller’s indelible grasp of Deb Callahan is an absolute wonderment to behold. She is salty and uncouth, yet vulnerable and empathetic. The frustration is palpable and Miller dutifully gets into the skin of a perplexed mother/grandmother who is so incomplete yet so determined. A fine performance is equally turned in by Hendricks whose big sister Katherine is resolute in comfort and guidance. It is also so refreshing to see veteran performer Madigan in an impactful role as the ailing motherly figurehead to these vastly different daughters. In smaller supporting roles, Sasso compliments Hendricks’ level-headed Katherine favorably, Paul is resourcefully added into the mix as the likable, but slightly sneaky-minded Chris, and Aidan Fiske (“Imperium”) brings legitimate angst as an older Jesse trying to come to grips with the late mother he barely knew as an infant.

All together — with startling revelation — American Woman is affirmation that perceived weakness can morph, through trial and tribulation, into resiliency. 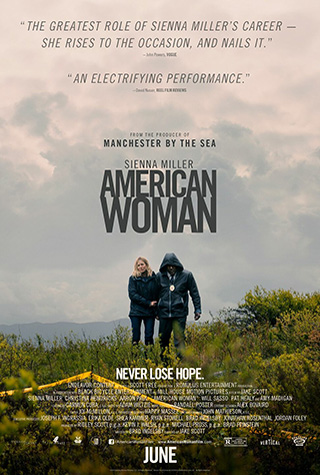