An older major league baseball player becoming a spy for the Office of Strategic Services (OSS) during World War II to foil an atomic bomb plot has enough palpable atmosphere to be a compelling and pulpy noir. What is even more intriguing, is that it actually occurred. Based off the 1994 biography written by Nicholas Dawidoff, Ben Lewin has re-visualized Morris Berg’s involvement in the covert nuclear race between the United States and Nazi Germany. While bursting at the seams with outstanding on-screen talent and impressive camerawork, The Catcher Was a Spy is a period thriller crippled by numerous historical inaccuracies, consistently disjointed editing, and an overall lukewarm atmosphere.

Morris “Moe” Berg (Paul Rudd, “Ant-Man”) was a professional catcher, playing a combined 15 seasons in the major leagues and was considerably average in most people’s eyes. However, after the attack on Pearl Harbor, Berg joined the Office of the Coordinator of Inter-American Affairs to take part in the war effort. While struggling to maintain his relationship with Estella Huni (Sienna Miller, “Live by Night”), Berg would be assigned by OSS wartime head William Donovan (Jeff Daniels, “Steve Jobs”) to Robert Furman’s (Guy Pearce, “Brimstone”) operation to intercept scientists in Italy to get close to German theoretical physicist Werner Heisenberg (Mark Strong, “The Brothers Grimsby”) and discover details on his possible work for the Nazi nuclear weapons project.

There is a lot wrong here. While the film portrays Berg’s arrival into Italy with the Allied offensive and his mission to get close to Heisenberg as his first assignment as a spy, it leaves out all of his previous experience parachuting into Yugoslavia to aid in the underground resistance against the Nazis. This decision to give him a wide-eyed trial by fire instead of his actual infiltrative roots ends up impressing like a cheap pang at typical flag waving to get us on his side. The program that Berg was part of, was actually kidnapping Italian rocket and missile experts (not just safeguarding and interviewing them) and shipping them back to the United States, whether they wanted it or not.

By the end of The Catcher Was a Spy, Berg has been painted to be an ambiguous, mildly misunderstood, yet brilliant patriot, whose epilogue notes his refusal of the Medal of Freedom. However, it doesn’t mention how he spent the latter part of his life jobless, surviving through exploiting his friends and relatives. All of these aforementioned points are not to decry Berg in any particular way, but that Robert Rodat (“Saving Private Ryan”) portrayed Berg as almost insultingly superficial. Though Rudd does an admirable job with what he is given, the complex intricacies of the man’s life is forgone for easy patriotism.

The visuals are (without a doubt) the strongest element to the film, with Andrij Parekh’s camera movements and composition reminiscent of old school thrillers (think “The Spy Who Came in from the Cold” with a touch of “The Conformist”). Buttressed by the inexorable Howard Shore’s ruminating score (which impressively cooperates traditional music and diegetic sound), the film effortlessly keeps your attention. However, that intensity is often fumbled by horribly cheap computer graphics, and some of the most frustratingly disunited editing of Mark Yoshikawa’s career (which impressively boasts four Terrence Malick features). Berg is surrounded by an enduring air of “hero,” and from the get-go we know nothing will stand in his way. As a result, any scene requiring tension is sorely tepid, regardless if the actual history is known to the audience.

Due to its hodgepodge of severely conflicting elements, this film scrapes by as passable, but not much more. Where the massive cast of talented character actors (including Hiroyuki Sanada, Tom Wilkinson, Shea Whigham, and Giancarlo Giannini) offer a lot, their under-utilization and abbreviated narrative importance stunts their potential to bring these historical figures to three-dimensional life. The Catcher Was a Spy had all of the elements necessary for a truly fascinating biopic on one of the most unlikely spies, but ends up a sloshing mess of dead end scenes and hamfisted patriotism. 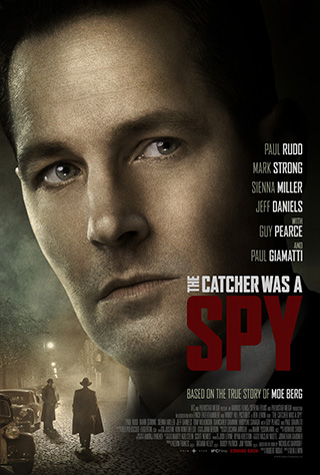