Two ex-convicts working at a dead-end diner are given an opportunity to change things around when a lawyer proposes a heist, unaware that larger antagonistic machinations are hard at work. While this plotline is fairly standard as far as heist capers are concerned, Hadi Hajaig has cranked the tonal voltage up to eleven by infusing a relentless onslaught of comedic and violent outbursts (not always mutually exclusive). While possessing a smart metacinematic atmosphere through fascinating blends of style and performance, his film Blue Iguana is a mishmashed myriad of mismatched writing and inconsistent technical prowess.

Eddie (Sam Rockwell, “Three Billboards Outside Ebbing, Missouri”) and Paul (Ben Schwartz, “The Intervention”) are on parole and working in New York. While they go about their stagnant lives, Katherine (Phoebe Fox, “Eye in the Sky”) offers a large sum of money to steal a package while it is in transit in London. Traveling to England, they pull together a motley crew of thieves and manage to steal the package, but a serious goof causes complications when accepting payment. These complications reveal Katherine’s actual employer (Peter Polycarpou, “Cleanskin”), and due to his unwillingness to pay for the completed job, they are now after the thieves’ lives. While pursued by several wacky mob enforcers and backed into a corner, the gang tries to set up one more job to get back and make good.

Every solitary moment of this film oozes with influence from the likes of Guy Ritchie, Danny Boyle, Shane Black, and Quentin Tarantino. Though that is not a criticism in and of itself (nor is it something I can obviously prove), the major issue is that significant elements throughout Blue Iguana feel like they were completely carbon-copied from “Snatch,” “Trainspotting,” “Kiss Kiss Bang Bang,” and “Jackie Brown,” without making many of those borrowed aspects fit this story. As a result, the conflicting narrative styles present in Hajaig’s feature are so extreme that when the film shifts gears, segues are near-nonexistent, and dynamic character arcs are absent entirely. It’ll jump from a over-the-top slapstick bit, to a running food gag, then to blood gushing violence, all in the same scene. True, the distance in the extremes very well could have been intentional, given the loony premise, characters and the constant self-referential attitude, so that’s debatable. However, it just didn’t seem to work for me in this instance.

While the aforementioned running themes and tropes conflict and batter each other about, that isn’t to say that this film is without serious merit. Ian Howes’ gliding cinematography manages to give even the most lackluster drama a vibrant visual experience, which blends together almost seamlessly with Hajaig and Pierre Haberer’s bombastic editing. Though, it should be said that their editorial flourish feels a little too close at times to Jonathan Amos and Paul Machliss’ cut for “Baby Driver,” as there were many times throughout where the background music dictated every aspect of the scene. This all buttresses the performances, of which Schwartz, Fox, Polycarpou, and Peter Ferdinando (“King Arthur: Legend of the Sword”) are the biggest standouts. Most disappointing is Rockwell, who gives such a subdued performance as compared to even minor characters, that it feels as if he isn’t trying at all. Again, this could have been intentional, considering how much more down-to-earth the character is in general, but it never impresses as a definitive decision.

There are many hilarious aspects at work here, and there is enough creativity and technical know-how awash throughout the film to keep audiences pinned to their seats. However, though there are moments of impressive polish that brim with snappy dialogue and technical innovation, enough to garnering several small laughing fits, Blue Iguana remains a relatively okay comedic experience that lack the uniqueness and bite of the films it seeks to emulate. 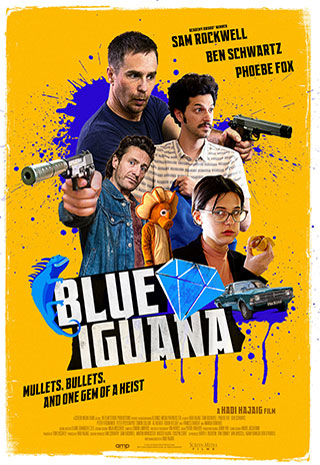