Tackling topics as trendy as gentrification, police brutality, and the post-prison life of convicted felons, there may not be a film more timely than Carlos López Estrada’s Blindspotting. Written by and starring Rafael Casal and “Hamilton” star Daveed Diggs, the film is as much a social observation of the aforementioned themes as it is a cynical mirroring of the city of Oakland, California. The film drips with the personality of its writers (both of whom are from the Bay area) creating an authentic and realistic experience that is charming, yet sobering.

What Estrada does most impressively is capture the aura of the Oakland environment in a way that compliments its roots with an outstanding soundtrack and a loyal visual flair, while simultaneously critiquing its modern development through its characters. The main characters, Collin (Diggs) and Miles (Casal) contribute a perspective that is genuinely fresh and compelling, providing a fish out of water sentiment in a city in which they both grew up in. The strife and roadblocks that inconvenience them throughout the film are as influenced by gentrification and race relations as it is by their individual choices.

This battle is portrayed on screen through surreal imagery that is reminiscent of another ode to urban California, “Sorry To Bother You,” but what Blindspotting offers that Boots Riley’s film seemingly does not, is a balance of realistic representations that compliment this surrealism in a way that emphasizes its characters. After an incident that sees Miles witness a cop murder a black man, his entire personality is deconstructed as he learns a new perspective in both how he himself is perceived as well as how black people in general are perceived in modern society.

Along this identity crisis, the audience is delivered an impactful combination of hilarious moments and clever representations of the environment in which these characters seemingly become less familiar with as the film progresses. The films main character’s charisma and visible intuition is the driving force of the films narrative, which gives the film gravitas and stakes that are relatable and relevant. One scene in particular — in the films final moments — encapsulates societal struggles of black men with a harrowing, but credible, piece of dialogue delivered by Diggs. His words are both a cry for help as well as a passionate quest for understanding.

Collin and Mile’s friendship in general is questioned throughout the film, creating a rift between the characters and those that care about them like Mile’s ex-girlfriend Val (Janina Gavankar, “Think Like a Man Too”), who struggles with understanding Miles after his violent altercation. Though what they experience separately becomes the central theme of the film, what they experience together allows the audience to peak into their relationships and dissect a modern disadvantaged context.

In this presentation, is a nuanced performance of the complexities of urban communities and the people that reside in and are products of them. Blindspotting ultimately provides a viewing experience that is as self-reflexive as it is entertaining, making it one of the most powerful and yet touching stories told on screen in some time, thanks in part to the genuine inventiveness of the writers and their personal experiences. With its message, maybe audiences can learn something valuable about cultural disparity and the plights of modern minorities because they may not find these themes in a package more well constructed than this movie. 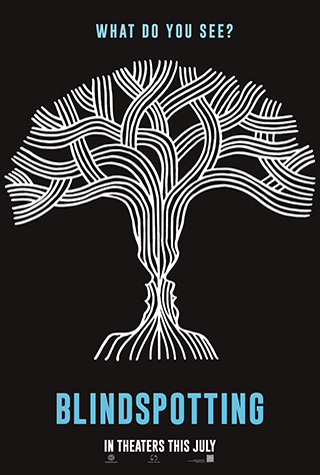