Horror auteur (“The Conjuring”) and box office money maker (“Furious 7”) James Wan takes a somewhat unexpected stab at the superhero genre with Aquaman. Starring the imposing, but beloved, Jason Momoa (“Conan the Barbarian”), scene stealing Amber Heard (“Machete Kills”), and a seasoned Willem Dafoe (“The Florida Project”), Wan’s installment to the successful (albeit it could be more-so) comic book films of the DC universe feels just as unsure about what it wants to be as the audience is in its first 15 minutes. Drifting on the line between tongue-in-cheek comedy and matrix inspired actioner, even the most inspired of comic book fans may feel a bit uneasy about this films’ introduction. But what Wan lacks in enchanting dialogue or creative plot direction he vehemently makes up for with jaw dropping set pieces, well choreographed action sequences and CGI/VFX work that would make any modern fantasy film blush.

Primarily set in the lost city of Atlantis, Aquaman follows the story of Arthur Curry (Momoa), son of the outcast Queen of Atlantis, Atlanna (Nicole Kidman, “Boy Erased”) and humble lighthouse keeper Thomas Curry (Temuera Morrison, “Couples Retreat”), a hybrid secretly trained from birth to become the next ruler of Atlantis. But unbeknownst to Arthur, someone already has the throne and seeks even more power, his half-brother Orm (Patrick Wilson, “Young Adult”). On top of this, Arthur has made a few enemies of his own along the way — most recently a pirating outfit run by a father-son duo (Michael Beach, “If Beale Street Could Talk” and Yahya Abdul-Mateen II, “Baywatch,” respectively) — giving his character almost too many villains to handle.

With the help of Mera (Heard), an Atlantean with telepathic powers and the ability to shape and displace water, Arthur learns of his brother’s sinister plans to unite the kingdoms of Atlantis, become “Ocean Master” and subsequently command the largest military unit on the planet in order start a war with the surface world. Arthur being of both aquatic and land dwelling descent, sees this as a major disruption to his beer guzzling everyday life.

Although Aquaman is marketed for its abundant heroic action, the subsequent relationship between Arthur/Aquaman and Mera becomes the main sub-plot of the film, as the two go on a world-wide journey to find the lost trident of Atlan, the long deceased king of Atlantis, so Arthur can assume the Atlantean throne (much like King Arthur, which much of the lore for Aquaman is lifted). The banter and flirtatious energy between the two comes of strong and, as it consumes much of the film’s run-time, it successfully keeps the audience engaged until the complex underwater battles with its much simpler characters heats up. Heard’s devotion to her strong, encouraging role and Momoa’s natural gift as a charismatic, initially uninitiated hero gives this large-scoped film a small, but immersive, lens to experience it through.

Wan compliments their chemistry by supplying absolutely amazing looking action sequences and providing a unique approach to the way they are shot with his captivating, action friendly direction. Wan uses his massively successful mobile, long-take directing style with a glistening aesthetic that DC’s comic book universe desperately needs considering the dreary, dark aesthetic of films like “Batman v Superman: Dawn of Justice” and even “Wonder Woman.”

Yes, more complex dialogue and plot holes a little less obvious could have made Aquaman an even better movie. And sure, sometimes the humor is just a tad bit too silly for its own good, but with the charm of Momoa in the lead role, Wan’s clever cinematography and his aforementioned stylistic approach to action sequences, this stripped down superhero flick offers more than enough for those looking for their daily dose of superhero excitement. 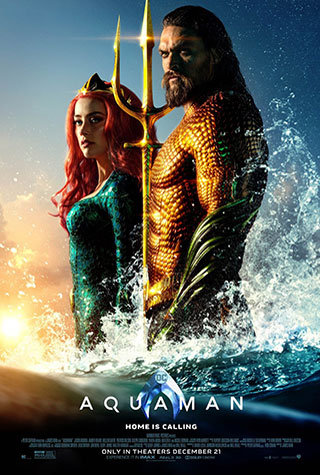