With Brightburn, David Yarovesky presents a welcomed twist to the superhero genre with his anti-superhero/horror hybrid that presents the perfect elevator pitch of what would happen if Superman wanted to hurt people instead of help them. Affiliated with eclectic director James Gunn (credited as a producer), Yarovesky is no stranger to the superhero genre having had a hand in both “Guardians of the Galaxy” films. Additionally his horror chops have had ample time to develop over the course of several projects having been a production consultant on 2016’s “The Belko Experiment” and writing and directing a horror film of his own in 2014 with “The Hive.”

Like those films, Brightburn has the personality and budget of a limited release B-movie which actually works in its favor, separating it from other entries in the glossy, overcrowded superhero genre.

The film follows Tori and Kyle Breyer a young and anxious couple battling infertility, hoping for the opportunity to start a family in Brightburn, Kansas. Tori (Elizabeth Banks, “Power Rangers”) has the type of warm, lighthearted spirit that could make any house a home, while her other half, Kyle (David Denman, “13 Hours: The Secret Soldiers of Benghazi”) takes on the more typical role of the stern man of the house. When a spaceship slams into their farm on a starry night, the desperate couple finds their greatest wish has become a reality, as the spaceship holds a fragile baby boy. Instead of making anyone aware of where he came from or even what he is, they sweep it under the rug and raise him as if he’s an adopted child (very much like the Kents).

Their son, Brandon (Jackson A. Dunn, “Avengers: Endgame”), seems like your typical nerdy outcast kid at his introduction several years later. He has a bit of trouble at school, he’s bullied for being a nerd and doesn’t seem to have very many friends, but for the most part, he’s pretty normal. That is, until he starts to become conscious of his abilities; it’s then that Brandon goes from normal farm town kid to an uncontrolled weapon of mass destruction.

The metamorphosis from child to monster is handled with an impressive amount of subtlety, and what follows is an impressive amalgam of unnerving action sequences, well-earned jump-scares, and a healthy dose of gore. This film serves both the superhero and horror categories unabashedly by combining a patient, realistic origin story with a rare level of empathy that, it can be argued, is a consistent shortcoming of both of these genres. From an audience perspective, it’s easy to feel an emotional connection to this family — Tori and Kyle didn’t ask for a homicidal alien child but this is what they got, and instead of avoiding their plight and simply focusing on Brandon wreaking havoc (which he is quite adept at), a healthy portion of this film portrays the couple combating this sentiment.

Should they tell someone where he came from? Are they responsible for his actions? Have they failed as parents or is this what he’s destined to become?

And though the subject of Brightburn gets dark (very dark as a matter of fact) and the writing penned by cousins Brian and Mark Gunn (“Journey 2: The Mysterious Island”) is rather undemanding, it never rushes or fails to keep the audience equally intrigued and entertained. Simply stated, if you are a fan of either horror or superhero films and looking for something fresh, this anti-superhero offering is definitely a movie for you. Oh and taking a cue from Marvel, stay through the credits . . . 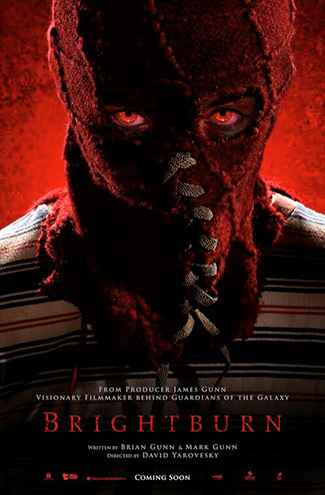