The Belko Experiment begins in Bogotá, Colombia, as a man drives slowly down a street clogged with traffic and pedestrians, looking calmly around at his surroundings, taking in the sights. Eventually, he and a number of other employees arrive at the Belko Industries building which requires an intense security sweep of each car. Security cameras swerve on top of gates and armed guards check in car trunks to ensure everyone’s safety. The day begins with friendly banter amongst the office workers — some tell each other jokes, others set up their paperwork for the day, some grab another cup of coffee. A new employee, Dany Wilkins (Melonie Diaz, “Fruitvale Station”), is being oriented to Belko’s work policies regarding insurance, her company car and apartment, and the tracer device implanted for her protection; as she’s told, there is a high risk of kidnapping for those working for the company.

One by one, the audience is introduced to a number of other Belko employees: Leandra (Adria Arjona, “Anomalous”) who sloughs off the advances of creepy Wendell (John C. McGinley, “42”); easygoing Mike (John Gallagher Jr., “10 Cloverfield Lane”) who closes her office blinds so he can steal a kiss from her in private; Terry (Owain Yeoman, “American Sniper”) who’s just arrived back from a trip with his family and has pictures to share; and Roberto (David Del Rio, “Pitch Perfect”) who tells Dany that normal people don’t work at Belko, helping her relax into her first day.

They are all caught off-guard when a voice announces over the intercom that the 80 employees in the building must listen carefully and attend to all directives beginning with one: Kill two of their colleagues in the next half-hour or else four will be chosen for them. Alarmed, the employees decide to evacuate the building and begin making their way downstairs. Some wonder where the voice is coming from and whether it’s a prank. Others, like Mike, start taking the lead and calmly help people to the lobby. A few on the roof, such as Marty (Sean Gunn, “Super”), continue smoking and joke about how absurd the whole situation is. Yet when time runs out, the absurd situation turns very grave as four people are violently killed by what many believe to be gunshots. Quickly, too, they discover that the tracer units placed in the backs of their heads for their safety are actually explosive devices, and panic sets in.

The voice returns, telling the remaining 76 people that they must kill 30 of their colleagues, or 60 will be chosen for them. The Belko employees turn to their base instincts — survival of the fittest, logic and protection of others, or hide and hope no one finds them.

Sharply written by James Gunn and directed by Greg McLean, The Belko Experiment is everything “The Purge” should’ve been and more. It is a taut adrenaline rush from start to finish, rife with nail-biting action and peppered with laugh-out-loud one-liners and tension-breakers. Where “The Purge” spent little-to-no time developing relatable characters you grew to like, The Belko Experiment casts a wide variety of new and familiar character actors who strongly remind you of friends and co-workers from your everyday life — you care very much about who survives, who’s in danger, and who’s personality turns very, very ugly.

Tony Goldwyn (“Insurgent”) stands out as the boss in the center of an extremely difficult situation, Michael Rooker (“Guardians of the Galaxy”) and James Earl (“The Lazarus Effect”) support as a maintenance man and security agent, respectively, who keep their cool and focus on their jobs, and Rusty Schwimmer (“The Sessions”) is easily recognizable as the kind motherly type who brings in baked goods every Friday to share with the office. The golden idol of the film, however, is Sean Gunn, whose Marty is hilariously in his own world and absolutely steals every single scene he’s in.

Nearly every other element — dialogue, editing, cinematography — syncs up perfectly to create an experience that grabs and refuses to let go. Tyler Bates’ music choices are especially spot-on and function both as harbingers of dread and moments of levity — my personal favorites were the Latin versions of “I Will Survive” and “California Dreamin’” (I’ll refrain from further detail as to not spoil their effective usage).

The Belko Experiment is a film with a very simple, but heart-chilling, premise that hugely succeeds on a visceral level. It’s not for the faint of heart, as it has its share of gore and violence, yet it’s definitely a horror film that should be appreciated for its clever construction, plot, and characters. Oh, if only we could get more horror films like this. 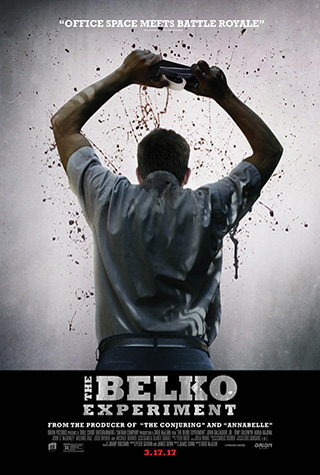