At St. Paternus University in Berkeley, CA, a small group of researchers has spent the last three years experimenting with the Lazarus serum, a discovery they hope will help the medical community escape the pressures of time, saving more patients while avoiding negative side effects and loss of cognitive function. Frank (Mark Duplass, “Tammy”) and his fiancée, Zoe (Olivia Wilde, “Drinking Buddies”), are passionate about their work, and have put off their own wedding in order to fulfill their scientific dreams. However, the original focus of their work has shifted a little; they’ve recently discovered that their serum, combined with a neurological jump-start brought on by jolts of electricity, can bring the deceased back to life (paging Dr. Frankenstein . . . Dr. Frankenstein to the lab, please). But unlike Mary Shelley’s good doctor, or his 1931 Universal Pictures counterpart, this group hasn’t stitched together human body parts; they’re experimenting on dead animals — first a pig, then a dog. The dog, named Rocky — the ultimate underdog who defied the odds, is energetic at first, but shortly begins to exhibit signs of confusion and aggression: He doesn’t want to eat, he lies very still on the floor, and he channels Katie Featherston from “Paranormal Activity,” eerily staring at Zoe while she sleeps.

Just as the group starts making some headway in their research, their grant funding is revoked, and they scramble to reproduce their findings before the big, bad corporation can capitalize on their ideas. During their attempt to make good on that plan, tragedy strikes — Zoe is electrocuted, and they are unable to resuscitate her. Despite the fact that the others appear to have seen or read Stephen King’s “Pet Sematary,” Frank, desperate to save Zoe, convinces the reluctant group to bring her back using the Lazarus serum. Zoe exhibits the same confusion as Rocky, but then discovers she’s gained some new psychic and telekinetic abilities. Realizing Frank and the others fear her, and could potentially turn her into a human lab rat, she lashes out against them, trapping them in the basement laboratory.

The Lazarus Effect is one of those horror movies that loads up on talent, but then lazes back onto old, overused tricks and ideas. Mark Duplass and Olivia Wilde, joined by Evan Peters (“X-Men: Days of Future Past”) and Donald Glover (“Alexander and the Terrible, Horrible, No Good, Very Bad Day”), are so much better actors than their performances allow here. Wilde, at least, gets the opportunity to play a little, and her facial expressions are fascinating and clever, turning on a dime from one conversation to another with expert subtlety. Conversely, Peters is unfortunately wasted as a dopey slacker-type, and Glover is reduced to a simple lab assistant who does nothing to further the plot. Rounding out the cast is Sarah Bolger (“The Spiderwick Chronicles”), who plays the lackluster Eva, brought on to document the experiment as it unfolds. But fear not, good viewers; this is not a found-footage film. There are a handful of point-of-view shots from both Eva’s camera and from security cameras, but they’re not overused.

On the other hand, the overuse comes in the form of jump scares brought on by darkness and flickering fluorescent lights. Perhaps effective to the film’s target PG-13 audience, these scares are basic Horror 101 moments that don’t resonate with a more experienced horror viewer. While the movie does earn some credit for sidestepping the typical, cheap happy ending, there are no new ideas to set it apart from the plethora of cookie-cutter, disappointing horror films that have come out in recent years. The ol’ religion versus science debate and Zoe’s recurring guilty nightmares are just two of the rehashed themes that we’ve grown tired of seeing again and again and again.

Producer Jason Blum, who’s repeatedly proven that he knows good horror when he sees it, with movies like “Paranormal Activity,” “Sinister,” and “Insidious” (among others), has missed a step with The Lazarus Effect; this is one long-dead movie idea that should never have been revived. 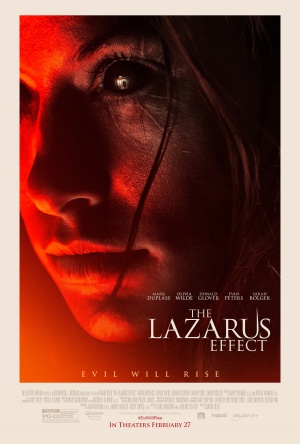