From its opening images of our planet illuminated by technology, to a remarkable long take that takes the viewer through the inner operation and impact of computer processing, Blackhat hooks the viewer both emotionally and intellectually. The film delivers an enthralling rendering of both the macro and micro scale of our interconnected digital world, offering a world view that balances grimness with optimism.

Michael Mann’s first film since 2009’s “Public Enemies is his best in over a decade, but received a limited release and has been a commercial flop. Hopefully it will find an audience on DVD and, appropriately, online, because Blackhat is a sublime merging of form and content, a film about the experience of living in our interconnected world on a psychological, political and philosophical level that conveys this experience beautifully through its narrative, stylistic and generic features.

Generically, Blackhat is a detective thriller about the pursuit of a criminal, much like Mann’s earlier films “Manhunter,” “Heat” and “Public Enemies.” The distinctive feature here is that the criminal is a hacker, manipulating computer systems rather than robbing banks or breaking into houses. This criminal takes full advantage of contemporary globalization, and the film’s cross-cutting between him and his victims emphasizes the interconnectedness of our world. Low-level shots in deep focus convey a sense of stealth and subterfuge, before extreme close-ups of the “Enter” key sets events in motion.

In response to this international criminal, a similarly global team of detectives is assembled, including FBI agents as well as officers of China’s People’s Liberation Army. The task force also includes the only man capable of tracking down the target, furloughed hacker Nick Hathaway (Chris Hemsworth, “Thor: The Dark World”), who is recruited by old friend Chen Dawai (Leehom Wang). The team moves fluidly between Los Angeles, Hong Kong and Jakarta, operation hubs set up in apartment buildings and hotels rather than relying on more stable institutions. To combat cyber-crime, law enforcement must pursue a criminal of global ubiquity, and there are genuinely chilling moments when the film’s tagline, “We Are No Longer Safe,” feels all too real as the hacker’s activities penetrate everywhere.

The risk of a cyber-thriller like this is excessive sequences of fingers tapping away at keyboards while status bars fill far more quickly than they do in the real world. On their own, such sequences are not dramatic and serve only to fetishize technology. Mann avoids this pitfall by instead focusing on people within environments, as he has done throughout his career. Echoes of “The Insider,” “Collateral” and “Miami Vice” pepper the film, especially when characters appear within wide-angled shots, the empty space of the frame receiving as much emphasis as the human figure. Inanimate objects such as concrete blocks and computer terminals are of equal importance as Nick, Dawai and Chen Lien (Wei Tang), because they are all reduced to data within the film’s world. Guy Hendrix Dyas’ production design features recurring shapes and images, tower blocks and cargo containers reminiscent of processing units, and these visual echoes create the film’s expressive architecture. Micro and macro scale are constructed along similar lines in Blackhat: Helicopter shots of grid-like cities evoke earlier sequences of moving around microchips, the bright moving lights of cars convey the sense of people moving through cities as sequences of code move around the web.

The irony of this unified, interconnected environment is that it is isolating: People are unable to interact or engage because of their digitization. In defiance of being coded, characters define their own identities, again typically for a Mann film. Intimate scenes between Nick and Lien recall similar scenes from “Thief,” “Manhunter” and “Heat,” where lone, intellectually-rugged men explain their existential guiding ethics to women who see through the bravado and point out what else is going on in the world. Nick and Lien’s romance may be generic cliché, but it demonstrates human connection in a world of dehumanization, echoing “The Last of the Mohicans” defiant romance against a world at war. Pleasingly, Mann also manages to avoid his earlier films’ damsel-in-distress trope, as Lien proves every bit as capable and adaptable as Nick. The subtle and constrained performances of Hemsworth and Wei further the sense of dehumanization, making their relationship all the more compelling as they declare their physical and emotional connection despite the intellectual objections.

The isolating environment of the film is aided by director of photography Stuart Dryburgh’s digital cinematography, which presents everything with an equal level of detail, whether the item within the frame is human, device or landscape. Mann has championed digital film since “Collateral,” and the equalizing effect of the format helps to convey the disconnection of the modern world. Yet it also adds great impact to action sequences that recall those of “Heat,” “Collateral” and “Public Enemies.” Blackhat features two brutal gun battles, shot in close quarters and with terrifyingly loud shots and explosions. The visual and aural design places the viewer in the center of the action, not unlike a journalist embedded with military troops. As a result, we can feel the recoil of the automatic rifles and the impact of bullets, and appreciate why the nearest piece of cover becomes the most important thing in the world when someone is shooting at you. Another set piece involves even more intimate violence, Nick improvising his fight against an armed gang in ways that highlight the importance of his courage and resourcefulness, yet also gives a sense of the irrelevance of these characters’ exploits within the world’s larger, indifferent context.

Ultimately, Blackhat is a gripping thriller with compelling action, an existential exploration of life in the digital age, and a re-imagining and re-interpretation of the concerns that have persisted throughout Mann’s career. It is a great shame that studio decisions have given this fine film such a restricted release, as it warrants the full cinematic experience that allows the viewer to truly appreciate Mann’s unique visual style. 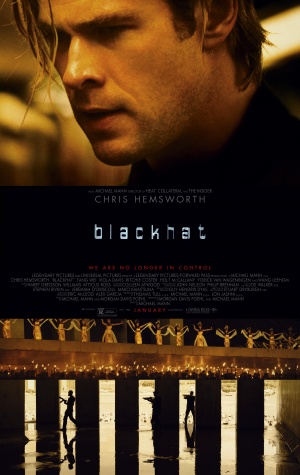