Granted we’ve all enjoyed our fair share of them, but it is still a nice change of pace to watch a Hollywood film that isn’t one of those big budget, high-stakes films with product placements, massive CGI explosions and recycled plots. Tommy Lee Jones’ The Homesman is a tour-de-force western on the opposite side of that commercialized spectrum. It’s a film with dazzling cinematography that empowers brave women and boasts characters that grab a hold of your attention; grasping you as tightly as the shackles that grip the delicate wrists of the three psychotic women in the film.

Jones’ character of George Briggs is a real crowd pleaser. He’s an audacious loner whose emotional journey spans even further than the five-week wagon ride taken in the film with destination at the Missouri River. Mary Bee Cuddy (Hilary Swank, “New Year’s Eve”) is another highlight. She’s spiritual but has a quick, assertive tongue; she’s versatile but ultimately needs a shoulder to lean on. It is through these two characters — while cameras pause to rove through and absorb the entire color wheel brushed across the canvas of the Plains — where The Homesman displays its strength.

If, however, you’re only looking for a gun-slinging pressure cooker, then look elsewhere. This is a story of personal growth, triumph over overwhelming odds and a close adaptation of the novel, “The Homesman” by Glendon Swarthout. While the screenplay mixes things up a bit, taking a slight creative license here and there or modifying the anecdotal tone, it still keeps true to the essence of Swarthout’s words.

It begins in the 1850s Nebraska Territory, where Mary Bee Cuddy (Swank) uses her commanding nature to wine and dine a local sodbuster. She then offers to marry this man, Bob Giffen (Evan Jones, “Gangster Squad”), but he declines, calling the 31-year-old seamstress and musician an ordinary bore. Meanwhile, three local women — played by Grace Gummer (“Frances Ha”), Miranda Otto (“I, Frankenstein”) and Sonja Richter (“The Keeper of Lost Causes”) — have steadily become insane from the fluctuating, severe weather, rampant illnesses and the perpetual need to rear children, and Reverend Alfred Dowd (John Lithgow, “Interstellar”) plans to show them asylum.

Dowd decides to organize a drawing where the loser would have to trudge across the frontier, to bring the women to Methodist wives on the state side of the Missouri, who would then bring them to their next of kin. One of the afflicted women’s husbands, Vester Belknap (William Fichtner, “Elysium”), refuses to take part, and so Mary Bee takes his place in the lottery. Shocker: She loses, and has to transport the women. The other husbands pitch in to buy her supplies, and she prepares for the daring adventure.

Armed with a rickety old framed wagon with shackles and two mules, Mary Bee sets out to do this work of God, but decides she needs a helping hand. She recruits the support of a local “claim jumper” (a property thief), George Briggs (Jones), who, lynched by locals, was on the brink of death. In exchange for saving his life, he agrees to help her on her journey east. The pair soon sets off with the local women, and will encounter everything from Indians, freighters, frigid temperatures and paper towns.

The cinematography for this film by Rodrigo Prieto, to put it “plainly,” is phenomenal. If you’re a fan of vibrant natural colors juxtaposed onscreen with equally laudable period costumes, then this film will be a treat. But, it is not that hollow, because it doesn’t stop there — The Homesman reaches much deeper than the just aesthetics. It works to empower women and the spirit of equality. Mary Bee’s relentlessness is admirable, and consequently, George Briggs is able to reconstruct himself. Basically, the narrative functions on a cerebral level, explaining human nature and it puts its characters to the test — literally and figuratively.

To the fans of expeditious films with troves of gunfire, flames and fortune: Do not fret. Granted, The Homesman doesn’t move with the pace of a film like “3:10 to Yuma” or “Seraphim Falls,” but it has as much flavor of a film like “The Three Burials of Melquiades Estrada” (which, go figure, starred and was directed by Jones), and is fiery and sinuous in its own right. One scene at a hotel in the paper town of Fairfield, which features James Spader (“Lincoln”), stands out in particular.

As mentioned, The Homesman stays true to Swarthout’s initial aims with the work, and its two main characters don’t stray too far from the prose at all. However, there are a few differences: There are only three wives instead of four; the buildup to Briggs’s lynching is not expanded on; and the film rushes into its biggest twist, which serves as an integral plot point. Nonetheless, the elegance of the writing transfers nicely to the screen. As for the leads, Tommy Lee Jones, with his grizzled look and attitude, saddles comfortably into the emotionally distant cowboy (after seeing him in a group of down-home Southern or Western films in the past ten years, it’s a safe bet he was probably born in the wrong century). There should be no surprises from Swank, either. Nominated for smaller awards for her efforts here, she impressively captures the tragic arc her Mary Bee travels.

None better does it show than when she gets lost on the plains. Alone, panicked and left to fend for herself, her desperation and fear is felt. And when she finally makes it back to camp, she gets no quarter. The West was ugly and cruel and Tommy Lee Jones doesn’t seek to whitewash that harsh reality. The Homesman strikes a resounding chord that all filmmakers in the Western — or any genre — should strive to reach. If they’re lucky, they’ll find their way . . . Jones has lit it brightly. 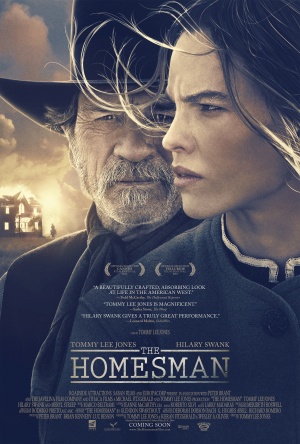