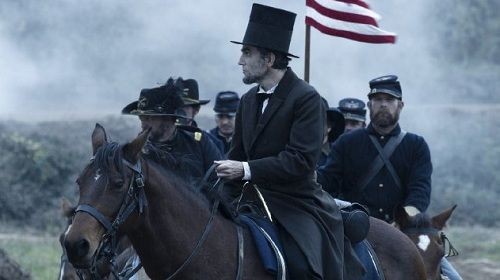 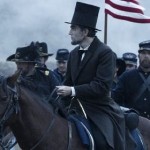 In 2012, Abraham Lincoln is on currency, in hundreds of dusty books, and sitting in a chair in his own memorial at one end of the National Mall. His image is stale; he is not a man, but an unknowable symbol. Steven Spielberg, however, fashions the legend into a flesh and blood human being in his biopic Lincoln. This Abraham (Daniel Day-Lewis) tells jokes, argues with his wife, and walks with a hunch in his shoulders as if an imaginary weight bears down on them. Lincoln is no longer just 25% of Mt. Rushmore, he is the most fascinating, sympathetic, and memorable character you will see on a movie screen this year.

Hard choices must be made to tell Abraham Lincoln’s story. Do you start with his birth and childhood? Do you cover his early legal and congressional career? Which part of his presidency do you focus on and if you include the assassination, will that be most of the story or just the end? Spielberg and writer Tony Kushner, who bases his screenplay on Doris Kearns Goodwin’s book “Team of Rivals: The Political Genius of Abraham Lincoln,” decide to focus not just on Lincoln’s presidency, but on a very specific time just after his re-election in January 1865. The Civil War is entering its fourth year and hundreds of thousands are dead on bloodied battlefields, yet there is a sense in the air that the war’s conclusion is near. It is anyone’s guess how it will end, but that does not stop them from discussing what will come after during Reconstruction. Some argue for the Union to take revenge against the south instead of leniency, some argue for a negotiated peace instead of an official surrender, and some argue for slavery’s return instead of full abolition.

Lincoln knows full well that at the war’s end, the courts may declare his Emancipation Proclamation illegal. The only way to ensure slavery’s demise is to pass an amendment to the Constitution (today it is the 13th Amendment). To do that, the House of Representatives must vote in favor of it with a two-thirds majority. But in 1865, there is no shortage of Congressmen who remain pro-slavery and dead set against the equaling of the races which they see as naturally separated by God. Convincing men to change their long standing beliefs seems an impossible task, and it is this task Lincoln, his Cabinet, and his cronies must accomplish if they hope to succeed.

Anyone paying attention in high school knows about the 13th Amendment and ultimately knows what will happen in the end. Therefore, it is a true credit to Spielberg, Kushner, and the cast that the process of its life in Congress is fraught with tension, suspense, and real emotions. Secretary of State Seward (David Strathairn) marshals the men who will do the arm twisting. The arm twisters, including Mr. Bilbo (James Spader) and Mr. Latham (John Hawkes) are greasy insiders promising patronage jobs and many other enticements to the fence-sitters. The fence-sitters are being pulled and pushed by their Congressional leaders including Thaddeus Stevens (Tommy Lee Jones) and Preston Blair (Hal Holbrook). Observing their debates from the balcony is Mary Todd Lincoln (Sally Field) who feels some shame from her earlier bouts of grief and depression over her deceased son Willie, yet remains determined to keep her oldest son, Robert (Joseph Gordon-Levitt), from enlisting. 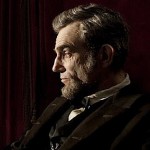 Behind all of this vast political machinery, corruption, debating, and harsh words stands a weary man quick to tell a witty story to make his point and lead a torn country towards his vision of a united future. Lincoln is a masterpiece of filmmaking and is an unforgettable film to watch in a theater. It will be nominated for an array of Oscars with wins most likely for Day-Lewis and Spielberg. Daniel Day-Lewis may be the most gifted actor currently working when his chooses to take on a role, which only happens every other year or so (everybody still remembers Daniel Plainview from “There Will Be Blood” and Bill ‘The Butcher’ Cutting from “Gangs of New York“). He raises his voice by what sounds like an entire octave to speak in what the historians say was Lincoln’s higher-pitched tone. He looks down at the table or the ground when in conversation but when required, he will command the room’s attention when he knows he must bind people together to do the right thing.

Crafting a biopic around a man as iconic as Abraham Lincoln requires a firm hand and concrete decision-making. If you include too much material from too many episodes in his life, the movie will feel stretched, light, and make much less of an impact on the audience because of its lack of depth in any particular area. By focusing Lincoln on a very specific and limited time frame, shaping the central conflict over one of the most transformative constitutional amendments, and employing actors who all give superior performances based on a stellar script, Spielberg has made what will most likely be the best film of the year and one which all should take the time and go see. 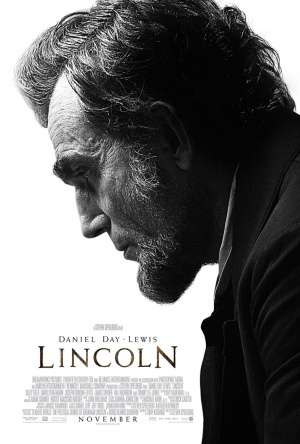