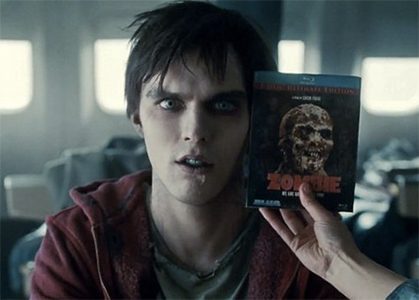 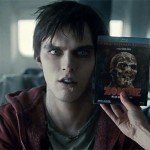 Zombie movies are always shot from the point of view of the last few and scared survivors. They are outnumbered, running out of ammo, their friends are bitten one by one, and the zombies just keep on coming after their brains. What about a zombie story from the zombie’s point of view? They experience the same events the humans do, but do you ever get to learn their side of the story?

One would think this wouldn’t work because zombies do not think, do not feel, and do not speak. Audiences know zombies can come in all shapes and sizes. There are the fast sprinters from “28 Weeks Later,” the comedic buffoons from “Shaun of the Dead,” and all the others in between such as in “Dawn of the Dead” and “Zombieland.” The zombies in Warm Bodies come in two distinct species. The regular zombies, called corpses, are slow, they groan, and sniff the air for any hint of human flesh in the area. The step after that are the “bonies.” These are corpses who have even given up on being a regular zombie. They peel their skin off, are more vicious, and appear to gain some speed and agility from the process.

R (Nicholas Hoult) is not your average corpse. While his body shuffles slowly down the road, his mind maintains a steady monologue. He is aware. In voiceover, he explains to the audience his limited understanding on how the world came to its current corpse vs. human state, his daily routine of wandering around with other corpses at the airport, and their eating process. The zombies must consume human flesh or they will die . . . even more so than they already have. An added bonus is if they eat the victim’s brains, they also consume their memories.

This sets up the oddest method of transitioning into flashback sequences ever filmed. When R takes a bite of brains, Warm Bodies goes into flashback. The memories he takes in are of Perry (Dave Franco) and his memories of Julie (Teresa Palmer). When R and his corpse friends stumble upon some scavenging humans, R gets hold of Perry’s brains which function as a plot mechanism to catch the audience up on the main human characters and how they got to where they are. During the fight, R spies Julie and one of those time stop scenes ensues which relays the fact that R is experiencing love at first sight. He puts some corpse blood on Julie to mask her smell and takes her back to his home, an abandoned jet airliner.

At first scared, Julie sees there is something different about R. He collects records, enjoys listening to music, and seems to really mean it when he repeats to her she is safe. At the same time, R’s voiceover is that of a guy trying to act cool on a date. He tries not to stare, but all zombies do is stare. He fixes his bloodied, matted hair, tries to act cool, and is a nervous wreck not trying to keep her alive, but trying to keep her entertained. Both R and Julie realize something is happening to him. He is slowly changing. His vocabulary increases, he moves a bit faster; he can learn. Corpses do not learn, but R seems to be breaking out of his physical prison. 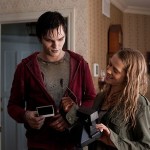 Have you caught on to the “Romeo and Juliet” references yet? R = Romeo, Julie = Juliet, Perry = Paris, they are kind of star-crossed lovers; the catch is they are not from two different families, but two different states of being. R’s corpse friend Marcus (Rob Corddry) is the Mercurito character and a comedic foil to R’s main character “hero” status. He naturally wants to eat Julie’s brains but seeing her interact and begin to care for R is starting to change him as well.

Since Warm Bodies is a “Romeo and Juliet” tale, there must be some familial conflict as well. Julie’s dad, Colonel Grigio (John Malkovich), is the human leader and is no friend to corpses. If Julie tried to bring R back into the fold, he would be shot on sight. Corpses do not blend in very well with humans, their skins is rotting, they smell of decay, and they most likely have a few bullet holes in their body to remind everyone what they are.

Based on the novel of the same name by Isaac Marion, director/writer Jonathan Levine (“50/50”) creates a relatively successful zombie romantic comedy aimed towards the teenaged crowd. It is akin to the “Twilight” series (dead boy, alive girl) with its romantic vampires and werewolves, but much funnier since it in no way takes itself as seriously as that franchise. Also, John Malkovich is the leader of the last humans on Earth which unto itself is just a great thing to see. 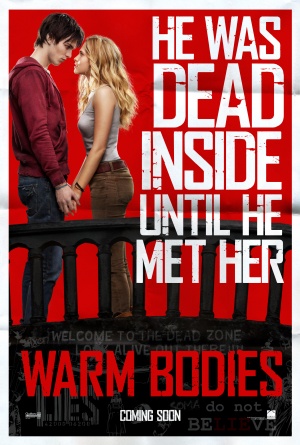