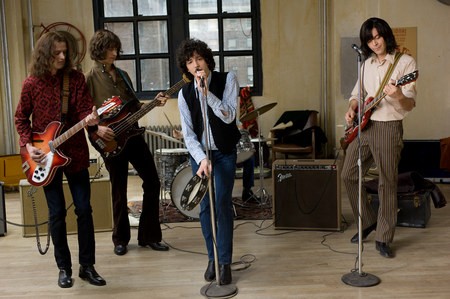 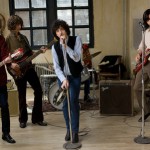 Stars in the making.

Mick Jagger and Keith Richards knew each other as children, but the more appealing version of their later meeting on the Dartford Railway opens Not Fade Away. Mick has a stack of vinyl R&B LPs on his lap which Keith takes an active interest in and so began the Rolling Stones. This vignette also launches writer/director David Chase’s first feature film. David Chase is best known as the creator of “The Sopranos” and sticking with familiar territory, Not Fade Away is set in New Jersey and stars James Gandolfini.

This is not a mob movie though, it is a coming-of-age tale with 1960s rock and roll as a supporting character. What the world considers the ’60s, however, did not begin on 1 January 1960 (that was still firmly ensconced in straight-laced ’50s culture) but with the November 1963 assassination of President Kennedy and the British invasion a mere three weeks later. Hair grew longer, drugs grew more popular, ideas grew edgier, and a distinct generation gap opened up between the parents who came of age during the depression and World War II and their increasingly alien children who are maturing under the influence of rock and roll.

Douglas (John Magaro) is a skinny kid from a stereotypical Italian-American family who realizes the only way to pull girls in high school is to either be a jock or be in a band. He has some decent talent on the drums, some singing chops, and more importantly, latches on to the new lingo about R&B tunes, guitar amps, and the perils of life on the road when you make it big. Instead of spending their time practicing and learning their trade playing covers and lowly gigs, Douglas’s band enjoys planning out how they will act accordingly when they naturally launch into the stratosphere as rock superstars. Douglas’s dad, Pat (Gandolfini), on the other hand, considers the whole idea of spending your time playing silly tunes and talking like a commie about Vietnam ridiculous. He would like nothing better than to literally knock some sense into Douglas about the real world.

Pat, who resembles Fred Savage’s dad from “The Wonder Years” in temperament and imposing frame, is only one of the character clichés which litter Not Fade Away. Douglas’s mom, Antoinette (Molly Price), has curlers in her hair 24 hours a day, shuffles around her small house in a shabby bathrobe and slippers, and operates an ironing board in the kitchen morning, noon, and night. There is also the girl who tries LSD and goes insane, the kid from high school who joins the marines and is Vietnam bound, and every other character you would draw up if you were casting the 1960s. Not Fade Away is a movie about the entire ’60s though, not just 1964. The timeline abruptly jumps between scenes usually between winter holidays and summertime to provide the audience a clue as to how far into the future the movie jumps. Douglas also starts to eerily resemble a young Bob Dylan as times progresses. 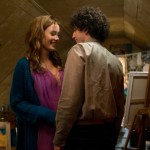 Not Fade Away feels like a 12-hour network miniseries about a specific part of ’60s culture crunched into a two hour film. Famous ’60s terms, people, and events are name-dropped to shove the timeline forward and the kids at the center of it all grow more adept at practicing pretension. One band member says he is only interested in advanced time signatures like 5/4 and 6/8, Douglas’s girlfriend, Grace (Bella Heathcote), casually states she dated an adjunct Harvard professor of medieval Persian poetry, and Douglas himself declares that rock and roll does not keep you young, it is a serious art form. The worst of these horrible conversations includes a reference to the new sexual revolution and how Douglas wouldn’t care if Grace cheated on him now, but Grace cheated on him back in ’64 before the revolution so that really hurts his feelings.

The ideas behind Not Fade Away are strong and what makes this film so frustrating is that you can see the potential for a really good film in here somewhere. David Chase is paying homage to his rock and roll youth but it is diluted with a trough of unnecessary segues such as a motorcycle accident, a trip to L.A., and one too many awkward dinners with the extended family ending with someone, usually Douglas, storming out of the house. Just because you grew up, experienced, and remember every year between 1963 to 1969, it doesn’t mean you must saddle your film with a stop in each of these years. Not Fade Away is a good example of where less would have been more. Focusing more on Douglas and Grace or Douglas and his father or just Douglas and his love of music would be much deeper than the forgettable chaff which should have been cut to the editing room floor. 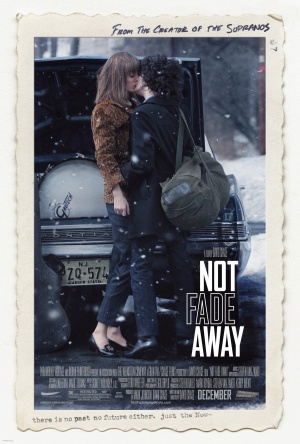