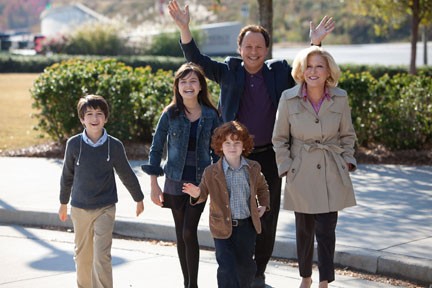 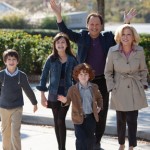 Well, it is nice to see Billy Crystal back on the screen again (the last time being an uncredited role in 2009’s “Tooth Fairy“), but the pretention and lack of very many funny moments in the newest “family comedy” from 20th Century Fox swamps whatever humor is created from Crystal’s fish-out-of-water grandfather character in Parental Guidance.

Here, Crystal plays Artie Decker, the radio voice of the minor league Fresno Grizzlies, who, even though he dreams of becoming the “voice of the San Francisco Giants,” is fired after the final game of the season. Coming home to his eternally perky wife, Diane (Bette Midler, “The Stepford Wives“), they pout for a minute but then immediately agree to watch their three out-of-sight-out-of-mind grandchildren in Atlanta.

There’s a good reason the kids are estranged. Not only do they look like the came from several different sets of parents (instead of Marisa Tomei, “My Cousin Vinny” and Tom Everett Scott, “That Thing You Do!“), but they are absolutely terrible actors, to boot (Harper, Bailee Madison, so horrid in “Just Go With It“; the silent Turner, Joshua Rush, “Playing For Keeps” and mop-headed Kyle Harrison Breitkopf as the tiny Barker who has serious emotional issues and carries on conversations with an imaginary kangaroo).

And, since mom and dad are supposed to be “modern” parents (i.e., living in a ridiculously automated mansion, talking things over with the brood instead of punishing them, putting them in baseball leagues that do not keep score, refusing to judge or even set boundaries, etc.), then one soon knows there will be conflicts with old school Artie and Diane. Some of these situations ring true, such as when Crystal confronts Turner’s speech teacher (“I just notice the children do everything . . . but speak.”), but are soon ruined by the cloying, preening overacting (or UNDER-acting in Rush’s case) of the preteens in the cast. Even twice Academy Award-nominated Midler cannot seem to drop down to second gear for any length of time. 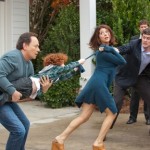 Other sequences, played for pure slapstick — the grandkids are given cake and ice cream seemingly for the first times in their lives; a politically-correct Little League contest with the now-obligatory bat to the groin; a symphony concert upstaged by a facepainted Artie and Barker urinating on Tony Hawk — are seriously stupid and collide with scenes attempting to tug at a heartstring or two (director Andy Fickman (“You Again“) should have exercised a little more “comedic guidance” over writers Lisa Addario and Joe Syracuse (who collaborated on the 2007 “Happy Feet” knockoff “Surf’s Up“)). Ultimately, everything fails to mesh at all, and we’re just left with a limp comedy or a half-baked family drama depending on which way one chooses to look at it.

But nothing tops the Hollywood-ized conclusion of Parental Guidance in which Artie says to his daughter, “You’ve got some great kids and you’re a great parent,” even though the viewer knows neither of which is remotely true. This sanitization is, as if it is needed, just another reason to not see this production that plays much like “Meet the Fockers” without the laughs (and that movie wasn’t all that funny to begin with either). 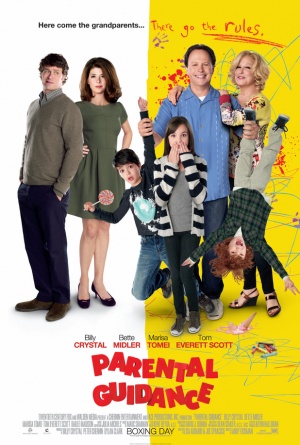