It’s a well-known fact that most third installments of film franchises do not rise to the level of the first (and often the second). Now, these examples are subjective, of course, but I present as evidence the following pictures: “Rocky III,” “Superman III,” “The Dark Knight Rises” and “Star Wars: Episode VI: Return of the Jedi,” among many others.

On very rare occasions, however, a third movie DOES exceed the second one (the most recent illustration of this is “Cars 3”).

This is also true in the case of Despicable Me 3 the latest effort from Illumination Entertainment and Universal Pictures. Directed by the threesome of Kyle Balda, Eric Guillon and Pierre Coffin (the latter also helping direct the first two films as well as the 2015 offshoot, “Minions”), this version brings back Gru (voiced by Steve Carell, “The Big Short”), as the formerly evil villain who found love thanks to three orphaned girls, Margo (voiced by Miranda Cosgrove, formerly the star of the TV series “iCarly”), Edith (voiced by Dana Gaier, previous “Despicable Me” movies) and Agnes (the vocal debut of Nev Scharrel replacing Elsie Fisher), trying to foil a madman’s plot to conquer the world with a giant robot culled from the wild and wacky 1980s.

Teaming up with wife Lucy (voiced by Kristen Wiig, “Masterminds”), both of whom were just fired as secret agents for the AVL (Anti-Villain League), Gru knows the bad guy, Balthazar Bratt (voice of Trey Parker, one half of the creative force behind “South Park”) very well, having failed on many occasions to capture him.

Bratt, it turns out, is a former child star in a TV show about a criminal kid who outsmarts all the law enforcement personnel he comes up against. Unfortunately, puberty strikes and his career is cancelled, so he turns to real criminal exploits.

Meanwhile, after moping around without any employment possibilities, Gru discovers he has — insert plot convenience here — a twin brother, Dru (also voiced by Steve Carell, imagine that).

With his flowing blonde hair, giddy attitude and fabulous mansion (he owns a pig farm on a Greek-type island), Dru and Gru do not seem to hit it off, but the grumpy one finds out that the father he never knew was a world class villain, too, and his goofy sibling is desperately trying to emulate both of them, so the dynamic begins and the two might just hit it off before the end of the picture.

Both agree to team up for a heist (with Gru in total charge, of course) and steal back the world’s largest diamond that Bratt had lifted from a Paris museum. But Bratt is one tough — and fairly intelligent — villain (Parker’s vocal work has been sharpened for two decades, so he knows what he’s doing here) and armed with thousands of action figures — no one bought during the tenure of his program — and a giant plastic robot, he plots to destroy Hollywood for wrecking his career.

Subplots include Gru’s minions walking out on him, getting arrested and escaping from prison, and Edith and little Agnes attempting to find a mythical unicorn in a spooky forest. These complications may not make much sense to the older set, but the vibrant colors of the animation, the various and sundry non-human characters (Bratt’s cheesy protective robot is especially hilarious) and the overall wackiness of Despicable Me 3 will bring their children around quickly.

In addition, decent support is added by Jenny Slate (“This Means War”) as Valerie Da Vinci, Steve Coogan (“Mindhorn”) as former AVL leader Silas Ramsbottom, and especially Academy Award winner Julie Andrews (“Mary Poppins”) as Gru’s wealthy mother. However, it’s Parker who not only steals the diamond, but purloins this movie with dance/fight moves, wacky plots, intricate weaponry and great retro tunes (listen for “Bad,” “Take On Me,” “Into the Groove” and “99 Luftballoons,” among others) played during his evil exploits.

But with the minions pushed to the back seat for this one, will that delude the box office revenue?

There are always worse animated feature projects to take the babies to (“The Emoji Movie” comes immediately to mind), so a third installment of this series is not going to cause any long-range mental or physical damage, and 90-minutes is the perfect run time to get in a few genuine laughs and sincere chuckles. 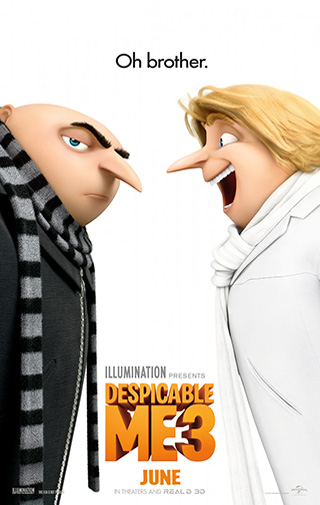