While a great deal of uninformed critics seem to be falling all over themselves about The Fate of the Furious (the Rotten Tomatoes website actually states, “The Fate of the Furious opens a new chapter in the franchise, fueled by the same infectious cast chemistry and over-the-top action fans have come to expect.”), the eighth installment in the “Fast and the Furious” series plays like an engine stuck on idle. It goes nowhere and leaves the viewer with nothing but mind-numbing FX and CGI that makes little or no sense and gives new meaning to the term “implausible.”

One can also blame it on director F. Gary Gray, who went from the heights of “Straight Outta Compton” to this lowbrow drivel. Gray cannot decide, like his predecessor, Justin Lin, if he wants to continue the “Fast & Furious” dimwit modus operandi or create a Rent-A-Center James Bond flick. Here, he decides to try both; and fails on each attempt.

Ultimately, however, it all ends up as a demolition derby where classic automobiles are smashed and destroyed under the weight of tanks and a huge Soviet-era submarine as well as a stilted, pretentious script. And, to add to the pomposity of the title (which, by adding “Fate,” is supposed to raise the bar a bit higher than the two inches it was already set at). The only word which will come to mind, however, is “Furious,” and that is certainly an apt description of the emotion one feels after shelling out their hard-earned bucks to view this tripe. Although there are enough goofballs who will gladly pay to see this nonsense because Hollywood never went wrong underestimating the intelligence of many moviegoers.

Before we get to the stale, used up continuing cast who barely emote, though, The Fate of the Furious features some of those individuals that are actually credits to their craft, including Academy Award winners Charlize Theron (“Monster”) and Helen Mirren (“The Queen”), as well as more mediocre thespians Kurt Russell (“The Hateful Eight”), Jason Statham (“Spy”) and Luke Evans (“Beauty and the Beast”).

Joining in are the rest of the regular chowderheads, including Roman Pearce (Tyrese Gibson, “Ride Along 2”), Tej Parker (Chris “Ludacris” Bridges, “New Year’s Eve”), Letty Ortiz (Michelle Rodriguez, “Machete Kills”) and Ramsey (Nathalie Emmanuel, “Maze Runner: The Scorch Trials”). The acting is as ridiculous as the implausible (there’s that word again) stunts which punctuate this effort every time the inane dialogue screeches it to a halt, which it does on many, many occasions.

Alas, those stunts and car chases (and wrecks) which trademark the franchise, are so over-the-top stupefying and obviously fake — and the automobiles (which few of our readers as well as the author could never afford in two lifetimes) are smashed for no reason, whatsoever.

Not unlike the the plot itself — the original “Fast and Furious” gang is betrayed by Toretta (Diesel), causing FBI supervisor, Mr. Nobody (Russell) to have Federal Agent Hobbs (Johnson) arrested and thrown into prison with Deckard (Statham) and then to get out again to join the idiotic race-team-turned-criminals-turned-good-guys in hunting down the traitor. Meanwhile, Cipher (Theron, no doubt wishing she were working with George Miller again), is forcing Toretta to do her dirty work, including stealing a case full of nuclear codes from the Russian president and the theft of the aforementioned undersea boat.

Despite the pedigree of several of the stars (obviously omitting Rodriquez, who is the single worst actor in this entire franchise), the cast still seems to sleepwalk through the production with only the occasional chase or explosion or submarine crash to jar the audience out of its stupor. And speaking of submarines, the concluding sequence — which features the monstrosity lumbering for miles on a frozen sea chasing cars with almost the entire cast either hanging from it or running away from it, is as ludicrous as Chris Bridge’s misspelled nickname.

Instead of concentrating on the action on screen or the razor-thin story, all I kept wondering was just how these automobiles could travel so far out into the ocean while being chased by a sub that crashes through the ice over and over again and how much cocaine the writers must have been on to conceive of such a concept.

That was the only defense mechanism I had during my watch of The Fate of the Furious: Just think of something else and get it over with. And pay no heed to the critics who write that the movie does what its supposed to do and that’s why many of them recommend it.

A dog answering the call of nature on the side of the road does what’s supposed to do, too, but that doesn’t mean you want to watch that on the big screen. 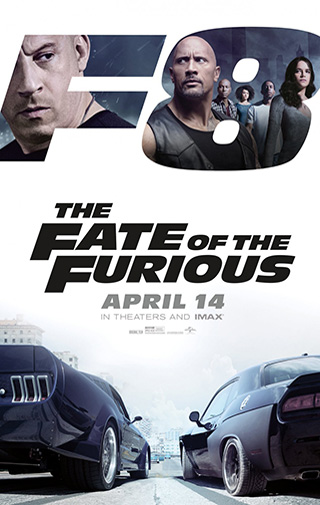