For the sake of full disclosure, I will say right now that I am no fan of “Gangsta Rap.” I am not an advocate of an art form that glorifies and promotes violence, profanity and the degradation of women, no matter how many of those things are an everyday part of the rappers’ lives. Using the bathroom is an everyday occurrence, as well, but I do not necessarily want to hear about it in a song. That being written, however, I do have to give some kudos to the newest Legendary Pictures release, Straight Outta Compton, the story of the 1980s hard core hip-hop group N.W.A. (Niggaz Wit Attitude), directed by F. Gary Gray (“The Italian Job”).

I wasn’t expecting a whole lot, but was pleasantly surprised by the acting, especially by Corey Hawkins (“Non-Stop”) as Andre “Dr. Dre” Young and Jason Mitchell (“Contraband”) as Eric “Eazy-E” Wright. Both delve deep into their respective characters and show new dimensions to two people who were mostly portrayed as thugs, drug dealers and business people taking advantage of the rage and frustration of their peer group. Their resemblance to the real Dr. Dre and Eazy-E is amazing, as well. The other members of the group are played by O’Shea Jackson Jr. (as his father, O’Shea “Ice Cube” Jackson), Neil Brown Jr. (as Antoine “DJ Yella” Carraby), Aldis Hodge (as Lorenzo “MC Ren” Patterson) and Marlon Yates Jr. (as Tracy “The DOC” Curry). By the way, there is no mention of original member Kim “Arabian Prince” Nazel, in case one was wondering.

The tale starts in 1986 when Eazy-E is a gang-banger and Dre is a DJ at a local dance club. Soon, they meet the other prospective members, form Ruthless Records and make a tape at a cheap recording studio, called “Boys In the Hood.” Soon, they are discovered by manager Jerry Heller (Paul Giamatti, “Love and Mercy”), who brings their work into the mainstream (as mainstream as this kind of profane work, which received very little airplay, could get). With the group touching a nerve in the late 1980s/early 1990s, concert tours, singles, albums and millions of dollars were the result. After the release of “Straight Outta Compton,” which featured the single Fuck tha Police (which protested police brutality and racial profiling), the group tapped into the anger of urban youth, but also drew the ire of the law enforcement community, including the Federal Bureau of Investigation.

Ultimately, though as in any musical group (or any FILM about musical groups) dissension takes place because of money, royalties and recognition for songs written. Ice Cube leaves first and begins a rap war with Eazy-E while Dre joins Suge Knight (R. Marcos Taylor, “Life of Crime”) and his label, Death Row Records. Eazy-E fires Heller and then finds out he has H.I.V. just as he was planning to get the fractured N.W.A. back together again. The film also introduces us to future raps stars including Tupac Shakur, Snoop Dogg and Warren G, among others.

Straight Outta Compton does not pull punches in portraying how the band members hated authority (and vice-versa), how most of the women in their lives were treated and just how many times the words “nigger” and “fuck” could be used in a major motion picture release. The LAPD is given no quarter either, but to be fair, neither is Suge Knight, who is shown as a violent, psychotic thug who uses threats to get his way, delights in his sadism and pistol-whips random citizens for parking in his space.

Gray could have used a bit more editing as he seems to want to put almost every aspect of the band’s story on screen (it runs almost 150 minutes) and all the whites in the movie are either evil monsters, thieves or cowards, but the total picture is quite a compelling — if not disturbing — experience. 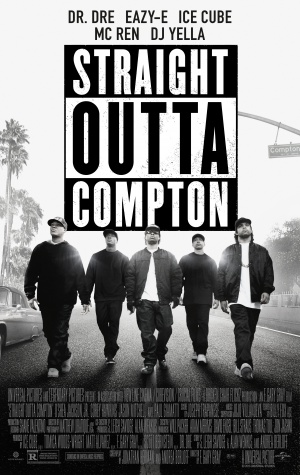