I have a friend who once wrote a novel about an entire minor league stadium (players and fans alike) which is suddenly transported through a wormhole to third century Palestine. There, the modern-day folks meet Barabbas (who was freed in Jesus’s stead) roaming about the desert. The players and fans change Barabbas’ name to Barry Efron, teach him to play baseball and he eventually gets them back to the 21st century by hitting a home run into the same wormhole.

I mention this only because the plot of the newest Universal release, Contraband is just as incomprehensible in many places. Not to say that this Baltasar Kormakur directed film is bad, it just has a few obstacles to overcome. Calling it an “action/thriller” may also be pushing things a bit.

One of which, besides the often confusing storyline, is the pacing. While some would refer to it as “deliberate,” I prefer to call it slow. A few action scenes break the monotony, but not for long. Plus, Mark Wahlberg is low-key enough, without having to stop and wait for the story to catch up with him.

Premise has Chris Farraday (Wahlberg) as a former smuggler who now goes legit and owns his own home security system. Because of some bungling by his brother-in-law, Andy (Caleb Landry Jones, “The Social Network,” “X-Men, First Class“), he is forced to go back and move counterfeit bills from Panama to the U.S.

This adventure gets him involved with a crazed Panamanian drug lord, Gonzalo (Diego Luna, “Milk“), as well as in hot water with the cargo ship’s captain (J.K. Simmons, “The Ladykillers”). Meanwhile, he suspects his best friend, Sebastian (Ben Foster, “3:10 To Yuma“) as not being on the up and up, and he is constantly worried about his put-upon wife, Kate (Kate Beckensale, “Whiteout”), and two adorable moppets.

It’s all rather interesting in parts, but Contraband does ask us to accept some major assumptions. For example, Farrady is referred to many times as one of the best smugglers ever, yet there is no example or even a flashback to prove the allegation. There’s a scene where a character discusses how he was able to get a sports car past customs, but nothing on film about it.

Another thing that’s taken for granted is that he left the business and wants no part of it any more since he has children. The problem is that his kids are at least 10 and eight years old and he has JUST left the smuggling game? Then there is the hand-held camera point-of-view that relies on far too many extreme closeups early in the picture (thankfully, this feature does not continue after about the first 30 minutes).

I will try not to get too bogged down with these details and move on to the more positive aspects. The cast, including those previously mentioned, as well as Giovanni Ribisi (“Saving Private Ryan”) and Lucas Haas (“Witness”) is no less than stellar. Unfortunately, however, there is little or no chemistry between Wahlberg and Beckensale because all Mrs. Farrady can do is basically stand around and get beaten up by most of the cast.

There are also some decent action scenes to be found in Contraband, although, as previously mentioned, these are few and far between. Most feature Ribisi, who steals the show as a violent, coked-up drug dealer who constantly totes a gun — even in view of his young daughter.

If one can put up with these distractions, a fairly decent conclusion awaits. It’s just that wait can be stifling and oppressive, at times. 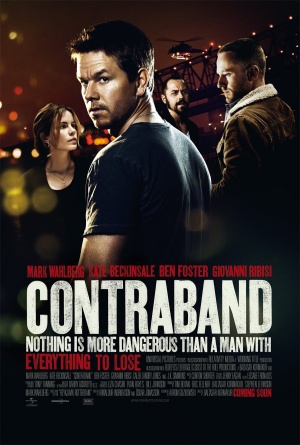