There have not been many exceptional War War I films save for a handful like “Lawrence of Arabia,” “Grand Illusion,” “Dr. Zhivago,” “Joyeux Noel,” “The White Ribbon,” “Paths of Glory,” “Gallipoli” and “All Quiet on the Western Front” (okay, that may be more than a handful). Recent attempts such as “Flyboys” and “War Horse” and “Beneath Hill 60,” among others, were looked at with suspicion when compared to the aforementioned.

Here, The Promise is an even rarer bird, a film about the Armenian Genocide (the holocaust BEFORE the Holocaust), the last such movies being “The Cut” in 2014, and “1915,” a year later.

Historical context has to be presented in order to even grasp this picture, however, and I hope to do so without being too burdensome. This genocide was the Ottoman government’s systematic extermination of 1.5 million Armenians, mostly Christian citizens within the Muslim Ottoman Turkish Empire (called the “Sick Old Man of Europe” at the time) and its successor state, the Republic of Turkey. The starting date is conventionally held to be April 24, 1915, the day that Ottoman authorities rounded up, arrested, and deported 235 to 270 Armenian intellectuals and community leaders from Constantinople to the region of Ankara, the majority of whom were eventually murdered.

The genocide was carried out during and after the war and implemented in two phases: The wholesale killing of the able-bodied male population through massacre and subjection of army conscripts to forced labor, followed by the deportation of women, children, the elderly, and the infirm on death marches leading to the Syrian desert.

Driven forward by military escorts, the deportees were deprived of food and water and subjected to periodic robbery, rape, and massacre.

The Promise, directed by Terry George (“Hotel Rwanda,” so no stranger to telling uncomfortable tales), is fairly accurate in these details, albeit on a much smaller scale. Here, it deals with medical student and ethnic Armenian Mikael Boghosian (Oscar Isaac, “Ex Machina”), who travels to Constantinople to attend school just before the outbreak of the Great War in Turkey (who joined the ill-fated Central Powers, Germany and the Austrian-Hungarian Empire) in an alliance against France, Great Britain, Italy and Russia (and ultimately, the United States), and which eventually plunged many parts of Europe, Africa and the Middle East into five years of Hell, took millions of lives and changed geopolitics forever.

During his studies, Mikael meets prominent Turkish citizen, Emre Ogan (Marwan Kenzari, “Ben-Hur”), who vouches for the Christian when Turkey joins the conflict and begins conscripting the minorities (this event, however, pisses off his stern racist father and causes much conflict later).

Mikael also becomes friends with Associated Press reporter Chris Myers (Christian Bale, “The Big Short” and an Academy Award winner for “The Fighter”) and his fiancée, Ana (Charlotte Le Bon, “The Walk”). Things go from bad to worse to horrible as divisions of the Turkish Army begin the systematic raids and forced evacuations of the many Armenian villages within their territories. In fact, had those Ottoman forces been more focused on the Russians and British, they might have succeeded more in the bigger picture.

Still, even during these dark times, Mikael and Ana manage to fall in love, even though Christian Bale is, well, Christian Bale, and she frets for the young doctor-to-be, especially after he is put into a forced labor camp, escapes and now has a pregnant wife (Angela Sarafyan, “The Immigrant”).

Is there a tearful reunion? Well, has anyone EVER seen a romantic motion picture in their entire lives? Of course there is, but it takes place while other (seemingly) more important events are taking place and sometimes love takes a backseat to things like staying alive, fighting roguish Turks and safely transporting orphans to Aleppo, part of the vast Ottoman Empire in Syria.

And while it’s a bit distressing to move from scenes of brutal repression (although not TOO brutal, though, considering many of the real victims were beheaded, beaten and crucified which we do not see in this film; to image the situation, just think what modern-day ISIS terrorist are doing to Christians, as well as their own Islamic brethren) to sequences of guerrilla battles to miraculous escapes to heart-tugging drama to the boring love scenes, but that’s what some folks want to see.

Fortunately, these scenes are mercifully short and what remains is a scathing indictment of the genocide — which seemingly NEVER took place in real life (in fact, a postscript indicates that Turkey, in any of her forms of governments, has ever apologized or even acknowledged the events portrayed within).

Isaac and Bale are appropriately noble and do well with their heroic roles, while Kenzari and James Cromwell (“L.A. Confidential,” and Oscar nominee for “Babe”) contribute fine support work, as does Shohreh Aghdashloo (“Star Trek Beyond”), as Mikael’s mother.

Also credit goes to the cinematography of Javier Aguirresarobe (“Warm Bodies”) and the production design of Benjamín Fernández (“The Others”), the latter transporting viewers to the Turkey of 1914-15.

The Promise, however, could have been a bit better in its passion and story-telling of those terrible days, but it is a decent effort and quite necessary to nonetheless bring these tragic events to light. 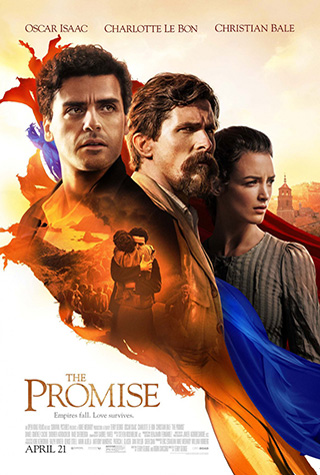