As Arthurian films have gone in recent years, the most epic in my opinion is probably “Excalibur” from 1981; the most interesting one is the 1995 Richard Gere vehicle, “First Knight”; the most fun was the 1963 animated “The Sword in the Stone”; while the best is easily 1975’s classic, “Monty Python and the Holy Grail.”

The worst, however, is no doubt this latest version, King Arthur: Legend of the Sword, directed by Guy Ritchie (“The Man from U.N.C.L.E.,” and the rebooted “Sherlock Holmes” film series) who also penned it along with Joby Harold (“Awake”) and Lionel Wigram (“Sherlock Holmes”).

This medieval mish-mosh attempts to incorporate Ritchie’s wearing-thin shtick of quick-edits, jagged cuts and seizure-inducing visuals with the legend of the Round Table, complete with massive battle elephants (think “300,” but on boatloads of HGH), African warriors (who no doubt dotted the ancient British landscape), Asian kung-fu masters (the film even uses the term, “kung-fu,” believe it or not), exploding arrows and, of course, the famed sword Excalibur which, after being removed from its stone prison, begins to take on a life its own (certainly much more than those acting in this film).

With so much going on, there is precious little room for such luxuries as story, plot, character development and clear, coherent direction. This results in overwhelming confusion and obfuscation, as well as Ritchie’s constant anachronisms, including score, dialogue and period technology.

It’s as if he binged watched every film on the subject (including 1954’s “Prince Valiant” and the 1967 musical, “Camelot”) added “Game of Thrones” to that list and then decided to make King Arthur: Legend of the Sword with a modern soundtrack and populating it with supposed artists who supposedly know their craft.

For instance, the titular role is played by Charlie Hunnam (“The Lost City of Z,” but who cut his teeth on the “Sons of Anarchy” TV series), a handsome, appropriately hunky Brit, who cannot carry the part of a man robbed of his birthright across the finish line. Instead, the writers pile on modern terms and plenty of ridiculous action sequences to take the acting burden off his shoulders.

Then there’s Guinevere (Astrid Bergès-Frisbey, “I Origins”), who, as a Mage (or magician), goes into unintentionally hilarious trances, but can control crows or something like that.

Former Academy Award-nominated actors Jude Law (“The Talented Mr. Ripley,” “Cold Mountain”) and Djimon Hounsou (“Blood Diamond,” “In America”) make appearances as the evil King Vortigern and the kindly Sir Bedivere, respectively, but add nothing to the production, unfortunately. Even Eric Bana, who starred in another sword and sorcery production (“Troy”) cannot salvage anything in his short time onscreen here, either.

Beware, however, as there are plans for a whole slew of sequels to be released behind King Arthur: Legend of the Sword. Hopefully, overwhelmingly negative critical and audience reaction might just founder those designs. Like the recent cinematic IEDs, “The Lone Ranger,” “Ben-Hur” and “The Legend of Tarzan,” among others, expect this to go nowhere. Even Skull Island would not take in this “King.” It’s best to just see “Guardians of the Galaxy Vol. 2” a few more times. You know you want to anyway. 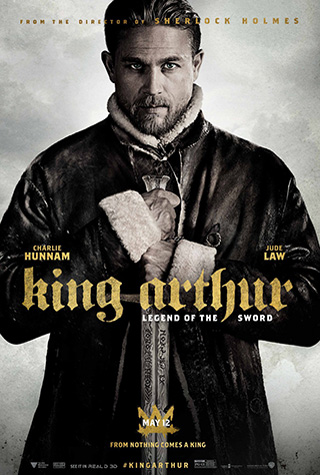