“The Man from U.N.C.L.E.” was a television series that ran from 1964 to 1968. It was actually misnamed because it concerned TWO men — an American, Napoleon Solo (Robert Vaughn, Oscar-nominated for “The Young Philadelphians”) and a Soviet, Illya Kuryakin (David McCallum, “A Night to Remember”) — who worked for an espionage organization called “U.N.C.L.E.” (which stood for United Network Command for Law and Enforcement). And each week the two were pitted against the crime syndicate acronym known as T.H.R.U.S.H. (while Bond battled S.P.E.C.T.R.E. and Maxwell Smart fought C.H.A.O.S.). The show was fairly popular for a few seasons and even spawned a short-lived spinoff, “The Girl From U.N.C.L.E.”

Long after such spy shows (including “Secret Agent Man,” “Get Smart” and “The Avengers”) fell out of vogue, Hollywood came along and revamped that last program for film starring Ralph Fiennes and Uma Thurman. That 1998 movie was a critical disaster and seemed to put the kibosh on any more such efforts, until Peter Segal unsuccessfully tried his hand with Steve Carell and Anne Hathaway in “Get Smart” in 2008. Now in 2015, with The Man from U.N.C.L.E., writer/director Guy Ritchie (“Sherlock Holmes”) tries again with this homage to the 1960s secret agent show.

Here, Henry Cavill (“Man of Steel”) and Armie Hammer (“The Lone Ranger”) play Solo and Kuryakin, respectively. Both are in East Berlin (the action takes place in 1963 during the height of the Berlin Wall Crisis and the Cold War) and both are after Gaby (Alicia Vikander, “Ex Machina”), the daughter of a supposed Nazi missile scientist gone missing after working in America. In a hectic opening scene, Solo manages to outsmart the “superhuman” Soviet agent and spirits Gaby over the wall, however, complications ensue because Italian mobsters have been putting together a nuclear weapon. This evidently motiveless group is led by the femme fatale, Victoria (Elizabeth Debicki, “The Great Gatsby”) and her husband, Alexander (Luca Calvani, “When in Rome”), who looks more like a 1970s porn star than an international man of evil.

Hugh Grant (“Cloud Atlas”) as Waverly (originally played in the series by Leo G. Carroll), does his best upper-class British twit impersonation, while character actor Jared Harris (“Poltergeist”) shows up in another thankless supporting role. The early sequences of the escape do show a Berlin torn by international intrigue with English, German and Russian being spoke by the principals and an opening credit role which allows younger viewers to see just what a dangerous situation the world found itself in at the time.

Thanks to the wide popularity of the TV show “Madmen,” a fond remembrance of Pres. John F. Kennedy and a desire to relive the early 1960s experience (to a point), plus Ritchie’s patented gloss and sharp sets, customs and lensing, The Man from U.N.C.L.E. looks great, but the flaws are quite apparent. The few action sequences are overwhelmed by long stretches of talking, posing and exposition. Kuryakin’s character seems almost psychopathic (beating people up at will and seething with an anger that makes little sense in the context of the script) and modern hairstyles and dress on many of the extras (okay, that’s nitpicking, but I’m a purist) can be distracting.

The worse crime, though, is the lack of chemistry between any of the leading characters. Solo and Kuryakin are supposed to be enemies — yes, I get that — but when they finally begin to cooperate, one would not believe it. Also, Gaby and Illya portray an engaged couple, which is completely unbelievable. The music is so obscure I could not tell whether it was period or not, but, to be fair, some decent jazz tunes could be heard through the gunfire and explosions.

The film will probably not do too much after its opening week, going up against such pictures as “American Ultra” and “Hitman: Agent 47,” among others, but it does at least highlight some great vintage automobiles, motor boats and costume designer Joanna Johnston’s quality work. That appreciation, unfortunately, shows that The Man from U.N.C.L.E. works better as a fashion show than an action/adventure movie. 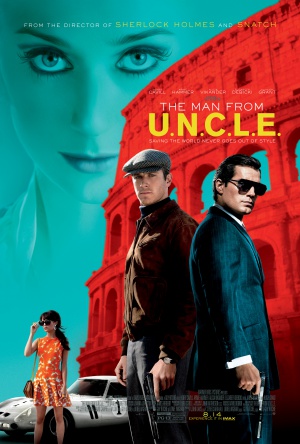