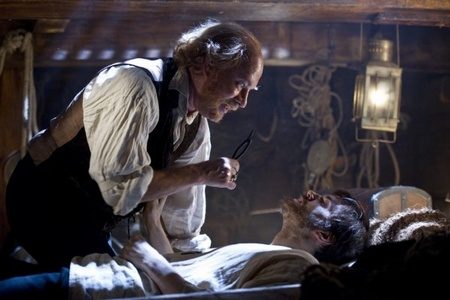 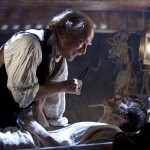 Cloud Atlas is a challenge. It does not arrive as 99% of its film peers do, with a beginning, middle, and an end. Six different stories spanning over 500 years of time are woven together and make your mind work overtime not only keeping them apart, which is its job while you watch the film, but afterwards, trying to connect larger and deeper themes to them. Is Cloud Atlas the most visionary and grand movie of the year or is a pretentious bomb which falls apart under the weight of its ill-formed ideas?

I am inclined to say more towards the grand vision end of the spectrum. Recommending people see it is a given; however, it should come with a warning attached. It will not make immediate sense to you when the credits start rolling. File Cloud Atlas next to “2001: A Space Odyssey” and “The Tree of Life.” Some movie-goers classify these as ground-breaking cinema masterpieces which should be studied for decades to come; others believe they are a gobbled mess. Cloud Atlas has more specific plot lines than either of them though.

Describing the plot of the separate stories of Cloud Atlas is missing the point. They are separate vignettes, yet they are tied together in a larger sense by ideas of freedom and perhaps karma. The same actors appear in each story but as different individuals with different personalities, and even as the opposite gender. Tom Hanks and Halle Berry are the two main protagonists in a few of the stories but Jim Broadbent, Jim Sturgess, Hugo Weaving, James D’Arcy, Hugh Grant, and Susan Sarandon pop up quite regularly.

What is perhaps the main theme of Cloud Atlas is freedom. In 1849, a British lawyer (Sturgess) tangentially involved in the slave trade makes a choice which alters not only the rest of his life but transforms a slave into a free man. This has ripple effects throughout the next 500 years. In 1936, a young and edgy composer (Ben Whishaw) reads the lawyer’s journal and gets ideas about a different type of freedom, the mind’s freedom to think and create wondrous music. In 1973, the energy crisis is spawning a transformation from oil to nuclear power; however, an intrepid reporter (Berry) has stumbled upon an evil plan by an industry magnate. In 2012, an old publisher (Broadbent) mistakenly winds up in an old folks home and must plan his escape with other folks mostly tucked away there by their children waiting for them to die. 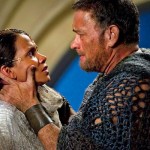 A tale in the future.

The 2012 story does not work very well. Compared to its five counterparts, it is small-minded, silly, and distinctly feels out of place. In 2144, the city of Neo Seoul has a new type of cloned-human whose main catechism to follow is “Honor Thy Consumer.” Society is based around the human power to shop and the government is now known as Unanimity; thinking for yourself is now entirely out of fashion. Finally, in 2346 after an event known as “The Fall,” men live in a hunter/gatherer type society on a large island sometimes visited by extremely technologically advanced outsiders who are looking for something.

Cloud Atlas has three separate writer/directors: Tom Tykwer and the Wachowski siblings. All of them have past work which today is considered visionary; Tykwer with “Run Lola Run” and the Wachowskis with the Matrix trilogy. They directed separate sections of Cloud Atlas which may account for the different atmosphere and tones employed in the filmmaking, but the pairing works. Telling a story which incorporates both laser gun shootouts in 2144 and the whipping of a slave in 1849 probably should have more than one director. The screenplay is based on a 2004 novel by David Mitchell which most likely tells a tighter and more easily digestible tale than the screen version.

Walking out of the theater after the show is over is an intriguing moment. Complete strangers will start up a conversation about what they just witnessed. I had a guy tell me, “You rarely see something like this.” Very true sir; Cloud Atlas is very rare indeed. 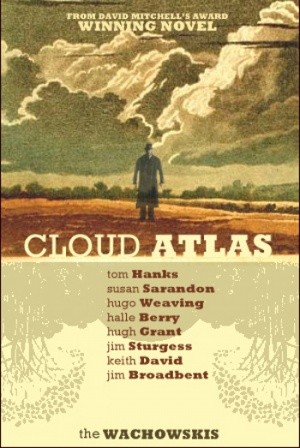