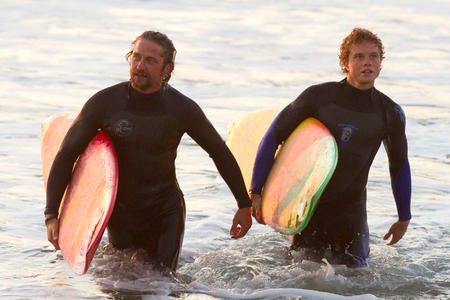 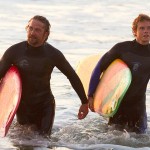 To be blunt and to the point, the best surfing film is “The Endless Summer,” maybe followed by “Big Wednesday.” The heart-tugging “Soul Surfer” may also be your cup of tea, as well. Unfortunately, Chasing Mavericks is not among the genre’s Top 10 (if there is even enough to even MAKE a Top 10).

In an effort to create “The Karate Kid” riding a wave, co-directors Michael Apted (“The Chronicles of Narnia: The Voyage of the Dawn Treader“) and Curtis Hanson (“L.A .Confidential“) end up drenching the audience in secondhand sentimentality that swamps any real emotion or empathy for the mostly clichéd, one-dimensional characters.

In fact, the whole enterprise takes on an unmistakable vibe of a live-action version of the animated film, “Surf’s Up” from 2007. Sadly, at least that particular picture had a much more interesting plotline and a more believable cast.

Chasing Mavericks stars Gerard Butler (“Machine Gun Preacher“) as Frosty Hesson (yes, FROSTY Hesson) and Jonny Weston (a series of less than memorable indie films and TV series such as the “ASS Apartment Sketch Show,” among others) as Jay Moriarity. After a meet-not-so-cute (Frosty saves him as kid trying to save a drowning puppy), it’s clear Jay needs a father figure and, for some reason, has glommed onto the freewheeling and disorganized Frosty.

This is proven several years later when the now teenage Jay, hitches a ride on the back of Frosty’s car and discovers the secret of Half Moon Bay, where the “maverick” swirls grow to ridiculous proportions. Led to believe these were mythical, he now knows they are for real (well, as real as current computer-aided technology can make them, anyway). So, like an idiot savant, without the savant, Jay is determined to ride one of these huge waves; and it seems nothing Frosty or his surfin’ buds can do will dissuade the young goofball.

Meanwhile, two actresses, Abigail Spencer (“This Means War“), as Frosty’s wife, and Leven Rambin (“The Hunger Games“), as the prettiest girl in school and the object of Jay’s clumsy affection when he’s not dreaming of scaling “The Poseidon Adventure“-like waves. These characters are even less developed than the two male leads, if that’s conceivable. 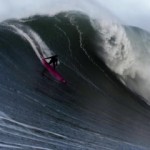 Riding the big one.

And, of course, since Chasing Mavericks uses the blueprint of every sports film made since “Rocky,” we get the awkward and reluctant mentor-kid relationship that finally buds into a growing respect then love — accompanied by the obligatory montage and all to the tune of a hip new chart single. The 12 weeks in which it takes to train Jay from a complete nincompoop on a surfboard to one of the greatest artists of the craft is ludicrous and the entire motivation behind his one-note desire will leave many non-surf nuts (most of the free world) mystified beyond imagination.

Butler does the best he can playing a cross between Jeff Bridges’ “Dude” in “The Big Lebowski” and Jan-Michael Vincent in “Big Wednesday.” Weston, on the other hand, may be a pretty face to the young ladies out there, but his acting talent seems to have washed up on shore, covered in seaweed and flotsam, and dragged down by his complete inability to utter one convincing line or evoke even the slightest concern or empathy.

Hampered by a waterlogged script that features a tidal wave of forced sentimentality, unsubtle father-son moments, school scenes we’ve seen in a dozen or so better productions and an over-reliance on beach parties (1984’s “The Karate Kid” had it right, show one and then move on), Chasing Mavericks, which is supposedly based on a true story (like say, “Marmaduke” was) has been compared by other critics to a simple Hallmark Channel movie of the week. That’s apt enough. Don’t pay full price is my only advice. 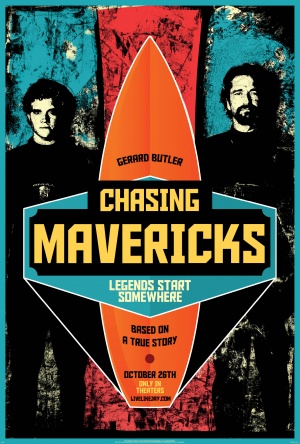