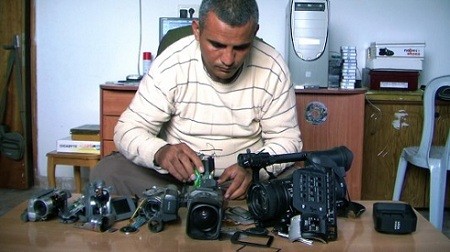 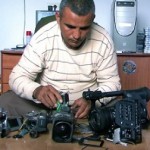 The on-going feud between Israelis and Palestinians over land in the West Bank is extremely politicized. Most days, only harsh words fired back and forth between Palestinian villages and Israeli settlements and some days rock projectiles and even bullets escalate the situation to tragedy. What Emad Burnat’s camera does is watch the back-and-forth chest pounding. There are no interviews, few editorials, and no slick editing or visual effects. In 5 Broken Cameras, Emad’s cameras just observe.

I write “cameras” instead of camera because Emad is on his sixth camera; the first five were either knocked or shot out of his hands by the Israeli military and in one case, Jewish settlers. Emad started filming the increasing level of bitterness between his fellow Bil’in villagers and the encroaching Jewish settlements when the Israeli military showed up one day and started building a fence. The Palestinians accuse the Israelis of a land grab because they say the land being sectioned off for new Jewish settlements belongs to Bil’in. Their olive orchards and grazing lands are getting cut in half along with the village’s main livelihood.

Soon enough, those olive trees are set on fire by the settlers. Is it a land grab? From Emad’s camera it looks like it is but there is no exact proof offered because there is no view from the other side of the fence. A traditional documentary would interview all parties involved, research the historical evidence, and provide clues to which aggrieved party has the stronger claim. That is not the job of Emad’s cameras though; they just watch.

They watch weekly demonstrations as most of the villagers walk out every Friday to the fence, chant slogans, yell at the Israeli soldiers, and then inevitably run away when the tear gas arrives or call for an ambulance when an Israeli sniper decides to take one of them out. Two of the most shocking scenes Emad’s camera captures involve Israeli assault rifles. The first shows one of Emad’s brothers getting shot in the leg. This would not normally amount to much; however, the brother is already in Israeli custody ready to be transported to jail when a soldier holds him upright while another soldier aims point-blank at his femur and fires. 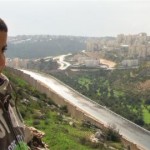 The second incident involves the town’s most beloved and respected resident. Popular with the children and adults alike and safely chanting slogans on the Palestinian side of the fence, a sniper casually shoots him in the chest from afar. Seen through Emad’s camera, the crowd at first thinks it was a grazing wound or a rock or any number of things. Only gradually do they realize the gravity of what just happened. Emad is not spared the rod either. Israeli soldiers arrest him multiple times on trumped up charges because they really do not like being filmed firing tear gas at kids or being caught red-handed shooting prisoners.

One of Emad’s own sons, Gibreel, is a focal point of 5 Broken Cameras. Gibreel is born right when the fence starts to go up during the phase of Camera #1. As time passes, the viewer watches Gibreel learn to walk, hears his first words which include “wall” and “army,” and see him celebrate his fifth birthday soon after his friend is shot in the sniper incident mentioned above. All Gibreel knows in the entire world is his small village, the wall, Israeli soldiers with their itchy trigger fingers, and his father with a camera.

There is no doubt a complete other side to this story as seen from an Israeli point of view. The audience does not see that point of view though, they only see what Emad’s camera sees and that represents enough frustration and disappointment to last a lifetime. 5 Broken Cameras is nominated for a Best Documentary Oscar so it should come as some solace to Emad and his fellow villagers that there is a wider world which now will be exposed to their visual autobiography. Some solace. 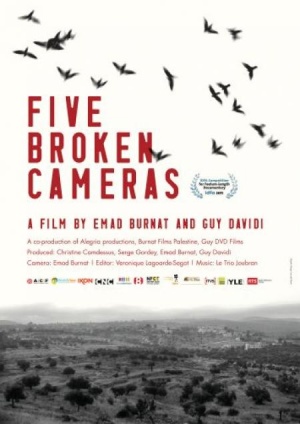