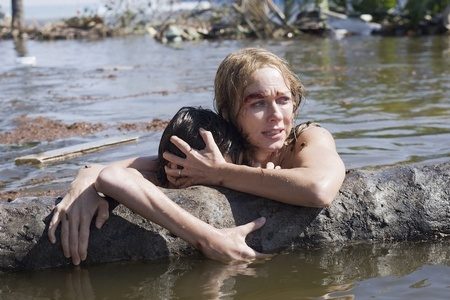 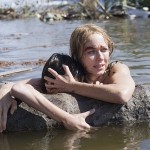 Cinematic sentimental gestures don’t come much more desperately inspirational than the slow motion shot of a person reaching skyward with a swelling score accompanying their ascent. In his syrupy drama The Impossible, director J.A. Bayona reserves this moment for the third act, but it’s not like the sentimentality sneaks up on us. This kind of exaggerated emotion is in the movie’s DNA right from the start, when some onscreen text reminding us of the 2004 tsunami lingers on the words “true story,” guaranteeing that we can’t ignore the dramatic importance of the impending narrative. Before we see a single frame of footage, the movie already hits a suggestively syrupy chord.

Introducing us to Maria (Naomi Watts), Henry (Ewan McGregor) and their three sons Lucas (Tom Holland), Thomas (Samuel Joslin) and Simon (Oaklee Pendergast) in a stilted scene of worried banter aboard a plane doesn’t help secure that sense of realism that Bayona desires, but before long, we’re on the ground and Bayona is fully invested in foreshadowing. The vacationing family are shown around the Thai resort that they’re staying at and the tour of the place is solely focused on how amazing and new and wonderful and lovely and relaxing this place is. Hmm . . . I think I hear a wave coming to prove you wrong, bellhop.

Even after they settle in, Maria, Henry, and the kids share a few moments together, but Bayona’s camera keeps drifting off to solemnly stare out at the ocean. Building suspense is one thing, but constantly reminding us of the imminent disaster that we know is on its way just feels obnoxious. At the very least, it’s dramatically inert. It seems as though Bayona doesn’t want to miss a clichéd beat, so eager is he to lend every scene, every moment a touch of gooey resonance. But when he gets to the tsunami sequence quite early on, he manages to mix surging horror with the sentimental flourishes that he seemingly can’t resist.

This particular sequence still takes stops along the way to get in touch with its sappy side (close-ups of hands reaching for each other, the nearly muted soundtrack that depicts a character’s disorienting experience), but the overall effect is undeniably frightening and intense. We see the water topple tall palm trees before it smashes into the resort, engulfing everything. Bayona hurls us into the powerful pull of the water with Maria, who clings to a tree in a claustrophobically tight shot that soon switches to a higher, wider angle to reveal the sheer immensity of the surging water and the emptiness of its surface.

This pair of juxtaposed shots, the individual in close-up and then the individual as a small piece in a vast wasteland, is a favorite visual motif of Bayona’s. It soon becomes tired and obvious, but he does manage to conjure some impactful moments during the disaster sequence. Convincingly capturing the hellish horror of underwater obstacles that threaten to impale at a moment’s notice, Bayona, cinematographer Óscar Faura and the astonishing effects team turn the roiling, muddy sea into a treacherous enigma that maliciously hides its greatest threats just below the surface. The nightmare of the wave eventually subsides, but it’s left many a mark on Maria, her body badly torn up from her nasty journey.

Along the way, Maria soon reconnects with Lucas, while we later catch up with Henry and their other two boys. With the water no longer flowing, Bayona turns to sap and quickly embraces his freedom to explore the story’s sentimentality with an arsenal of weepy clichés. A phone call home isn’t just about the emotion of the onscreen caller, but also the looks on the faces of other sad survivors and the encouragement to revisit the phone call for maximum dramatic effect. Meanwhile, Lucas’s search for something to do in a crowded Thai hospital leads to him running around and recording the names of missing loved ones currently sought by ailing patients. He then runs around some more while yelling out their names, hoping to reconnect two separated souls. In Bayona’s hands, this act of good samaritanism is wringed of its dramatic potential and reduced to one more shamelessly sentimental distractions. 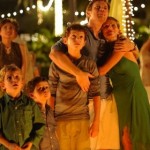 Such is the case with most of The Impossible, post-tsunami landfall. This is a supposedly impossible tale of a severed family finding each other again across a greatly devastated divide, so the potential for sappiness is clearly high. But the potential for quiet, contemplative drama is also present. Bayona simply seems so enamored with the cinematic familiarity of recycled sentimentality that he’s willing to settle for empty emotions. When it comes time for a metaphor about the “beautiful mystery” of dead or dying stars to rear its ugly head, it’s clear that the movie has crossed the syrupy point of no return.

Oddly enough, while the performances are all compliant with the sentimentality, each actor feeding it in their own way, the acting itself is more of a highlight than a detriment. Watts is quite good in a demanding and punishing role that leaves her either floating through debris or clinging to life in a hospital bed. The sudden change from a physically active role to an inactive one gives her interestingly opposing shades of experience to work with. The kids are all pretty decent, with each of them managing to be relatively believable in the context of a harrowing journey. McGregor is the weakest link and the most susceptible to the sap, but for all the bad scenes he has, he still convinces as a downtrodden dad.

None of the performances are able to elevate the material of The Impossible above the syrupy space where Bayona has anchored it and that is the insurmountable problem. For everything the movie gets right, either in relatively commendable performances or absolutely phenomenal makeup effects, it can’t rise up from its modest ambitions to tackle the truth of its story with dramatically fortified focus. The movie is seemingly always searching for a cliché it hasn’t already dragged through the mud. And while he does the dragging with gusto, Bayona seems only capable of cheapening the drama. After all, he’s clearly just waiting to reveal that skyward thrust he practically promises the whole way through. The force with which he tugs at our heartstrings rivals that of the tsunami. This is a tidal wave of treacle, eager to unleash a flood of tears. Well, will you settle for an eyeroll? 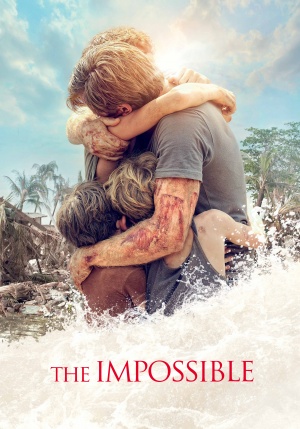