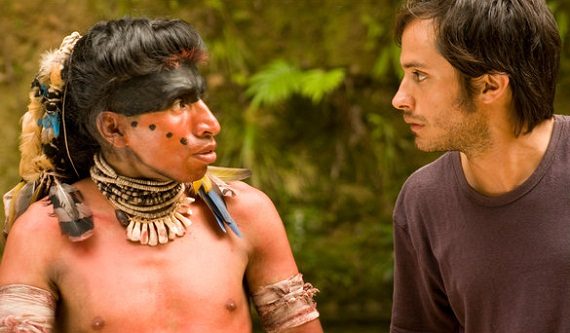 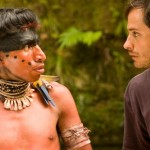 In a film within a film, director Sebastian (Gael Garcia Bernal) and producer Costa (Luis Tosar) are shooting in Cochabamba, Bolivia in the year 2000. The film they are working on proposes to depict Christopher Columbus’ exploitation of the indigenous native population in his voyage to the Americas and the effort of two priests to stand up to the Catholic Church. Written by Paul Laverty, the regular screenwriter for British director Ken Loach, and dedicated to the late progressive historian Howard Zinn, Iciar Bollain’s openly political drama Even the Rain takes on the past history of exploitation of native populations, showing a parallel to current history.

The film developed through Laverty’s desire to dramatize the life of Bartolomé de las Casas, a Dominican friar who became an anti-slavery activist in defiance of the church and his native Spain. Shot in the high Andes because of budgetary constraints, Even the Rain attempts to conflate three levels of exploitation: The historical treatment of the Native Americans by the Spanish conquerors in the 16th century; the actual attempt by Bolivia to cede control of the country’s water supply to a British-American corporation; and the filmmakers’ cost-cutting that results in the Quechua population being paid only $2.00 an hour as extras.

Opening with a “La Dolce Vita” shot of a wooden crucifix being transported to the mountains by helicopter, the film moves to an open casting call in Cochabamba as hundreds of Bolivians line up to audition for a role in the projected film. Turned away by the producer when the quota of locals is filled, Daniel (Juan Carlos Aduviri), a vocal political activist demands that the Bolivians be hired even after they are told to leave. As a result of his strong personality, he is selected to play the role of Hatuey, the first Indian to be crucified for resisting the Spanish and Christian empire. 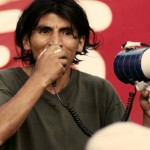 A problem arises, however, when Daniel becomes the leader of a local group protesting the social injustice entailed in Bolivia’s privatization of its own water supply (a true event that forbade the native population from collecting their own rainwater). Even after Daniel tells him “You don’t understand, water is life,” Costa demands that the young actor give up his political campaign to concentrate on the film which needs him desperately. As the director, Sebastian likewise must walk a thin line between balancing his ideals with his powerful desire to present a revisionist history of Columbus to the world. “The protests will be forgotten, but the film will last forever,” he argues.

Tosar is outstanding as the arrogant producer who is drawn unwillingly into the political protest. Overheard on a phone call, Costa brusquely tells a foreign investor how he is putting one over on the locals, not realizing that Daniel, standing only a few feet away from him speaks English. Eventually, however, Costa is forced to choose between the success of the film and the demands of his conscience staring at him relentlessly.

Even the Rain tells us that understanding the past is meaningless unless that knowledge can be made relevant to the present day, a lesson that the characters must learn the hard way. In lesser hands, the film could easily have become didactic or preachy, but Bollain maintains a steady hand and the result is an engaging and powerful film that not only speaks out loudly against injustice, but does so with poetry and passion. 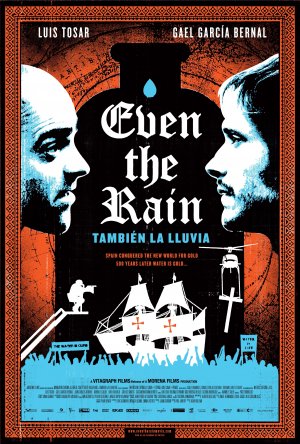