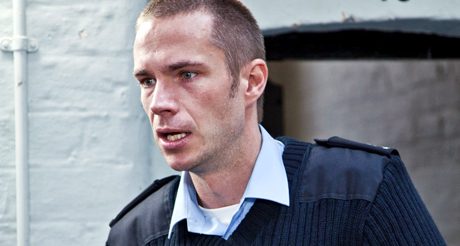 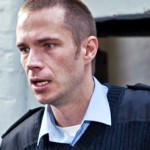 Screwed is a surprise; the monochromatic DVD cover masking a film that is simplistic yet intelligent, gritty but also emotionally in check, a scrappy little crime drama anchored by an above-the-grade performance from James D’Arcy (turning in equally strong work in “Cloud Atlas” this year). Based on the book by Ronnie Thompson, a former prison guard writing under a pseudonym, Screwed is essentially an in to life behind bars in modern-day England and the everyday of the man who run the prison, or at least pretend they do.

D’Arcy plays Sam, a traumatized Iraq War vet who takes up the prison guard position to support his long-suffering girlfriend Danielle (Kate Magowan) and their new baby. Like any other line of work, being the new kid on the cell block means being chewed out at best and brutalized at worst. Sam can take and does dish out some punishment in defense at first, but as he gets more involved in the work and the social circle of his colleagues turned drinking buddies, inhibitions begin to slip. You know where this is going, and Sam’s redemption is essentially guaranteed but that doesn’t mean that director Reg Traviss (2006’s “Joy Division” and 2010’s “Psychosis“) can’t craft a tense little potboiler and fill it with capable actors and a strong lead.

The thriller elements of Screwed are brought to the table via some underhanded dealings that Sam stumbles onto and then has a hard time letting go. The man has a moral core and a damaged psyche and when surrounded by dangerous cons and equally threatening guards, Sam’s patience runs out quickly. Particularly blood-boiling are the remarks of convict kingpin Truman (Noel Clarke, fearsome and seemingly fearless), who knows more of Sam’s background than he possibly could. Beyond the prison gates, Sam falls in with Deano (Frank Harper), who likes to cool down after a long day of work with a lap dance and a bit of cocaine.

Bad mates make for bad business partners and Traviss lets things corrode a bit too slowly, pacing turning out to be the film’s biggest setback. We spend too much time in the prison watching tensions flare up — it’s solid genre film-making no doubt, but there’s only so many scenes of scraggy-faced men whispering to each other with heavily-accented Brit slang peppered throughout before it all melds together. When the plot finally does come together, it’s too little too late although the road to the finale is made considerably smoother by D’Arcy’s portrayal of Sam. 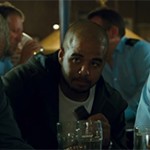 Hardly suggesting a burly man or even one undone by confrontation, D’Arcy nevertheless gives dimension to an initially bare-bones portrait of a vet whose scars follow him into a line of work that can’t help but exacerbate old wounds. He is able to radiate first inexperience, than despair and finally righteous anger from within a thin, non-threatening frame and isn’t afraid of giving in during the more emotional scenes. When Sam finally breaks down, it feels cathartic and D’Arcy sells the breakdown, the film in that moment stepping out from the under the shadow of the hard crime drama. But in the end, that’s what it is and Traviss and company play by the rules until a strange, uncharacteristic ending that’s buoyed by stadium-ready British rock.

One final note of criticism must be voiced — the US DVD of Screwed features no subtitles of any kind. Given the heavily accented delivery of almost every character in the film, that means some of the dialogue-heavy scenes (and there are many) are going to be partially unintelligible. With the accents already a possible strike against the film for the average viewer, why make it a challenge? 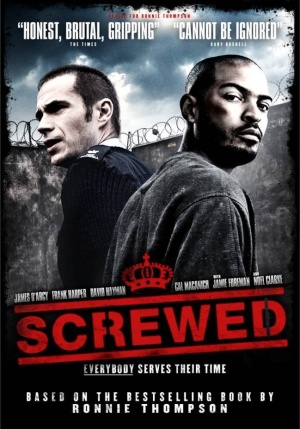