There are so many routes that Sidemen: Long Road to Glory could have taken, many of which, indeed, are taken, yet so they are without any one specific focus — other than its characters.

Unlike the documentary, the three main characters of this story, the enigmatic Pinetop Perkins, the lively Hubert Sumlin, or the ever-glowing Willie “Big Eyes” Smith, had little to no choice. This, at its very core, is what ascends to each boogie, riff and beat that once produced the blues. And that is one of the routes that Sidemen: Long Road to Glory could have followed, a story about history, which is to say a story about roots — of blues and bluesmen, of becoming one, out of having no alternative routes, inside sites with no choices, other than escaping: Escaping routes to oppression and poverty and addiction and domestic violence . . . all dressed with consecutive decades of systemic discrimination.

But this route is only followed so far by director Scott D. Rosenbaum and writer Jasin Cadic. So soon the story stops being about history, until it goes all the way to the background. To the fore come the three protagonists . . . background figures for the better part of their careers — yet cult figures for musicians of all kinds, from blues people to rock and rollers, old and young (from Keith Richards to Jimi Hendrix to Eric Clapton to Robbie Krieger to the Allman Brothers to Johnny Winter to Bonnie Raitt to Joe Perry to Derek Trucks and Susan Tedeschi). But, other than musicians and professionals, these were forgotten artists who lent the best of their abilities to musical titans: Muddy Waters (for whom Pinetop played the piano and “Big Eyes” the drums) and Howlin’ Wolf (for whom Sumlin played the guitar). The focus, all the focus that drives the route this film keeps for the better part of its 90 minute life-span, is on these three characters. Isn’t it ironic?

Instrumental in the comeback and later recognition of these three musicians, Rosenbaum and Cadic followed their protagonists for almost three years before their passing in 2011. The fact that the three of them passed away within a nine month span spawned the interest of making a film that would make a just homage to these most influential trio, that would make justice to the size of their lives and talents, that would make the definitive reminder that they shouldn’t be forgotten . . . and also (artistically) lobby for Sumlin’s induction to the Rock and Roll Hall of Fame.

The years that Rosenbaum and Cadic spent with their three subjects show in the intimacy they achieve, creating interactions that go way beyond interviews to become candid conversations, potent portraits of three men who were getting to know a fair size of fame at the very twilight of their lives. The almost a decade that passed before the end product was finally completed shows just as much. These are intimate portraits painted with too much material at hand, and mainly made in the editing room. With too many choices to cut, too many routes to take, the portraits are intimate, yes, but also disparate and vague. There where their subjects show utmost frankness, their eyes show paramount blades. Whole horizons are cut short and entire stories sacrificed at the service of a streamlined narrative eager to tell three lives with the need to convey their legacies at the same time.

Yet what keeps consistently fascinating in Sidemen: Long Road to Glory is the miniature approach to portrait-making – if with miniature we should not interpret detailed. Making intimate portraits of footnotes is no easy task to take, no easy risk to make. When made well, we find that these footnotes, once expanded, reveal the grace that emerges at the encounter between talent and struggle, fight and joy, oblivion and credit. And at this crevice we appreciate the long detour that sometimes life takes on its road to glory. Once expanded, these figures reveal how comfortable they were by being away from the cover, the limelight and front stage. It is in this comfort that all footnotes live, away from the pressure of an always vulnerable, assailable text.

And since postcolonialism became a trend that patterned our reading habits some fifty years ago, the exercise of salvaging those supporting characters that borne in them the weight of a mighty impact has brought from the bottom of the page many a lost gem. Antecedents in this kind of film, and in this kind of genre (even musically) have looked at unacknowledged hit-makers (i.e., “Standing in the Shadows of Motown”) or of background voices that cemented celestial chants, perennial pieces for posterity (i.e., “20 Feet from Stardom”) or of poetic machinists of sounds who arranged many of the most recognizable tunes of a whole era (i.e., “The Wrecking Crew”) or of simply magical, marginal places where great music seemed to surge from the very ground (e.g., “Muscle Shoals”), or walls (e.g., “Sound City”). What has been remarkable about these postcolonial exercises is that they typically are well-received in the mainstream and, sometimes, as is the case of “20 Feet of Stardom”, even awarded its highest honors.

Yet the paradigm over which the postcolonial exercise is built is not only humble, but also laudable. It is about acknowledging that history is a collective endeavor, that seemingly small figures may have had humongous historical impact. As has been shown by the continuous outcomes of these exercises, a history measured on impact is not a history gauged by heroes, but rather by heirs, not appraised by standalone feats but by everyday toil, not judged by inspirational outbursts but by consistent perspiration. Such is the postcolonial attitude towards history. And such wants to be the attitude of Sidemen: Long Road to Glory.

It is clear, though, that a new look to the exceptional does not demean those who were great; it rather acknowledges those who gladly (or, sometimes, forcefully) lent the shoulders over which this greatness was lift to its splendorous heights. So did Pinetop and “Big Eyes” to Muddy, or Sumlin to Howlin’. This look stops to greet greatness with as much enthusiasm as those who stood by their side, those who always had their backs, who may had been just as talented, if not more, but who were way too shy to shine.

And as we’re watching Sidemen: Long Road to Glory, as we follow this abridged road to their glory, we’re tempted to ask what would life be without atmosphere but a seamless vacuum? What is the fore without a background? And just as every millenary history needs a backdrop to be told, as all sentences need a context to be read, as each immortal image needs transient verses to be caught, all revolutionaries, leaders, innovators, eternal stars on the luminous constellation of human invention required tangible bodies to translate their novel possibilities into material facts.

These questions, I would like to think, are consistent with the overarching theme of Sidemen: Long Road to Glory: Blues is the music of survivors; it is the music of those who toiled and suffered in their flesh the curses they had to carry in their blood. The resilience, the longevity of the genre is perfectly mirrored by these three men, whose legacy survives almost intact in new generations of kids feeling blue — and having a hell of a time with it. This is perhaps the most solid emotional kick that the film achieves, as we see young kids fresh from Pinetop’s foundation “bluesing” the shit out of their instruments. What resides at the roots of this genre tingles right inside the frailest virtue of our human condition: Our capacity to suffer and to find our way out of it. These three men resented, recoiled and resisted their backgrounds, bouncing back as many times as they fell. Cats who always landed on their feet.

It is a shame, it must nonetheless be said, that these stories still need (as the genre and the men needed) so many white cats to translate its/their greatness to the tongues that the mainstream speaks; a mainstream which, as with history happens, is such an ungrateful lover — too prone to forget those who were there every day, those who dressed it and undressed it, touched it with no reserves, in favor of those who, every so often, could make it come. 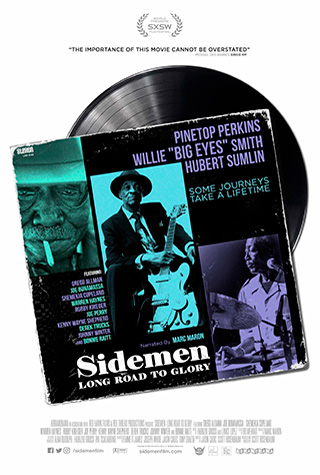