At the point in which Yoshiki, musical ombudsman, drummer, keyboardist/pianist and main songwriter of the Xtremely popular X Japan (simply X in Japan, though not in Japanese, for this is no ideogram, but only an alphabetic, apathetic X), Xtremely so in their Pacific archipelago, mythical prophets in their own land . . . at the point in which Yoshiki says something insightful about himself, his life, his past, his music, his band, his body, we aren’t interested anymore. “Pain doesn’t age,” he says, summarizing thus the bladed relationship he has borne with almost everything around him and inside. But, like the opening sentence of this paragraph, the assertion comes after pointless digressions that lead nowhere. Even when the main subject aligns with the main trope of the film, even after, we’re left somewhere between lost and lethargic. Both director and subject had been balancing for too long on that thin, sharp blade between soulful exploration and teenage angst that characterized for years (still does, but now it’s almost completely asinine) all forms of metal (heavy, speed, progressive, etc., etc.). The best and the worst.

We Are X is that kind of documentary that completely misses its mark, the kind that actually, X aside, gives you the impression there was never a mark to begin with. It follows the rise and fall and disbandment and triumphant comeback of X Japan, a metal/glam rock cult group with nearly religious followers in Japan and a cult following everywhere else in the world, including America, where the band tried hard (heavy) to break new grounds — unsuccessfully so. We don’t get to know very well why that happened, other than the fact that they were Japanese and they played with an accent. Musical connoisseur, Gene Simmons, internationally known for his musicianship and versatility, ventures to say that had they been born in the US, they would have been the greatest band in America, and therefore, in the world. Other than that, there’s few to be known.

Except for a few clues from rock sages, Stephen Kijak’s film misses its aim over and over again. We never really get to understand anything at all; it’s all scratching through the surface of a double-edged sword, contouring the shoreline between myth and mist, mythification and mystification. We Are X, true, is not as creepily shallow as a “VH1 Behind the Music” (way, way behind), and, definitely, not as monstrously self-indulgent as Metallica’s “Some Kind of Monster” (yes, an unnameable kind). But close. It is, most positively, not the in-depth, raptured look it purports (first) and/or wants (after) to be. Descriptive to the Xtreme.

And not even its descriptions are complete. The main problem with We Are X is how incomplete it feels. It never finishes what it starts. Not looking at Yoshiki’s pain. Not looking at his past. Not at the band’s. Not at the music (not even one song is played to its entirety). Not at . . . all. It’s its wooliness, its inconstancy, the inconstancy of an eye that dwells in too many places (never at once, always linearly) without focusing on anything properly, not giving any image, object, or vision its fair due, not even its unfair one. It’s a gaze that annoyingly keeps shifting its focus and lens, unwittingly digressive. Unlike the garments that garland most of the band’s acts, the storylines seem stitched — never woven.

So, even the trope of pain that seems to be at the core of its main subject is stitched together, physical with psychical. The connections are quite obvious; it’s not hard to make them. Yet the effect feels hollow, with no resonance within our experiences as viewers. Yoshiki’s inoculations, for instance, stand almost as a symbol of his vulnerability, which contrasts heavily with the strength with which we see him banging his drums. A Logan-like serum quickly loses our attention as it is anxiously rushed into the scars of his past, his father’s suicide, his mother’s grief, his own, etc. By the time we come back to the pained joints, we’re not that interested anymore. It all loses its purpose, if it had any. This loss kind of summarizes the overall focus of the documentary (if it has any); it is an irresponsive myth pulled by the currents of an apathetic stream. When it finally touches land, it is too bloated and swollen to appreciate.

Likely what is most annoying of We Are X is that it doesn’t lack interesting subjects; it’s just how underdeveloped they are that unnerves us. The loss in translation, for instance, of the band’s first attempts at transplantation, trying to graft themselves in American soil, opens an ample area for exploration that is too hastily brushed. The way, for instance, in which the Western canon has treated Japanese Manga, as an exotic genre rather than as a medium in its own right, is perfectly reflective of X’s fate after their first attempt at internationalization, and perfectly reflective of the reception they’re having as they prepare for their dreamed comeback show at Madison Square Garden (in what portends to be the documentary’s narrative gravitas). But we see this, again, because it is too obviously present, not because of Kijak’s eye. The American industry’s exemplary ethnocentrism is displayed in all its infamous glory — in spite of the director’s attention to it.

Another aspect annoyingly overseen (or too rushedly brushed) is the degree to which X grafts their Western influences into their ancestral traditions — the degree to which they bring the heavy sounds and make-up to Manga storytelling and Kabuki theater aesthetics. Again, this is anecdotally told in passing. And, perhaps, the portrait is all too accurate, as (judging for the very few seconds of musical pieces and gigs we get to see) the band likely did a similar job when integrating these influences: Stitching rather than weaving them together. In the same way in which the film doesn’t decide on a frame to house its myth, the band doesn’t provide the ground where its mythology can properly grow. A homeless myth is not too different from an unripe mythology. Cut-outs on a paper wall.

And it’s not clear either whether Kijak really brought the fragmented, often digressive narrative from Manga or if it is just the by-product of his own vacillation. The traditional style (heir of Kabuki theater, template of all pop art in Japan) is not seized by him with enough conviction to affirm either way. The way in which image overthrows words in Manga is too frequently replaced by talking-heads iterating storylines that weren’t even properly introduced before. Images, unfortunately, are rarely left to speak for themselves.

There is, nonetheless, one consistent feat in the film. The main reason why We Are X does not fall into the atrocious arena of VH1 or MTV’s clichéd formulas is its absence of an omnipresent narrator. If there are words, they are all intradiegetic, they’re all issued from the characters’ mouths. Yet, although a focal feature of Mangas, we cannot fully say whether Kijak followed this model or not; we could just as much say that he subscribes more to Dziga Vertov’s school than to Robert J. Flaherty’s. There’s not enough meat to say that, although there is no eye-in-the-sky camera, his is a Manga kind of gaze. Even though the camera is always at the level of the characters, it is never intimate enough. It always feels like a courtesan eye, an eye that indulges in what its subjects want to see, rather than risks to see what is beyond their (often) vain stares. The eye behind the camera is neither compassionate nor critical nor penetrating — let alone intimate. The analytical montage, the signature move of Manga narrative structure, is replaced by Kijak with a flattering mishmash. Nothing but a pleasant portrayer.

The only constant in We Are X, the only X indeed, is interruption. As happens with its subjects, age is constantly deferred, constantly tabled and avoided. Because aging is what’s truly painful. Consider this work then like a vanity portrait. Doubtless better than Botox. Though barely better than make-up. Not one arc ages in this film. Not one arc concludes. It’s an old myth putting on a mask of cosmetic products to keep an undying appearance. Not one arc ages, and thus not one finds a natural spot to stop. 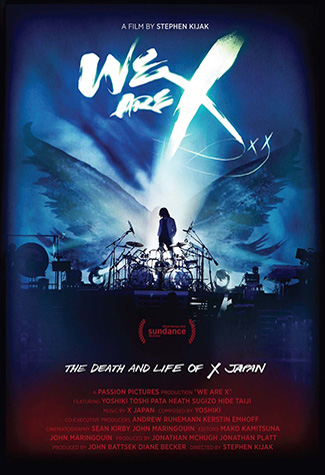