This latest Disney picture, Beauty and the Beast, joins a growing list of live-action movies which traces its origins to animated films, including “The Jungle Book,” “Pete’s Dragon,” “Cinderella” and “Maleficent,” among others. The bar here, however, is just a bit higher, considering the 1991 edition became the first animated feature to earn a Best Picture nomination (it lost to “Silence Of the Lambs” in another terrible Oscar choice).

The story, based on the old French fairy tale about the bookwormish, independent Belle (Emma Watson, “The Perks of Being a Wallflower”), following her addled father, Maurice (Academy Award winner Kevin Kline, “A Fish Called Wanda”), to a dark spooky castle in a haunted wood. It seems that it was once the opulent home of a fabulously wealthy, but vain and spoiled Prince (Dan Stevens, “A Walk Among the Tombstones”) who was cursed with a beastly appearance because of those last two attributes.

It wasn’t just him who gets the boot, however. All of his servants are turned into machinations of their daily chores (for example, a musician becomes a harpsichord, a dresser is a wardrobe, a maid is a feather-duster, etc.). In addition to all of this, the Beast is forced to bide his time watching a decaying rose which simply informs him that when the last petal falls — before someone falls in love with him — he (and his household) will stay this way forever.

Meanwhile, Belle takes her dad’s place, leaving him to travel back the village and attempt to convince skeptical citizens of what happened. It seems, though, only the buff and vainglorious Gaston (Luke Evans, “The Girl on the Train”) and his longtime companion, LeFou (Josh Gad, “Pixels”) actually believe the crackpot clock-maker (or DO they?). While all of this is transpiring, Belle reluctantly begins to see the Beast for what he really is (a CGI’d special effect that keeps Stevens covered up though out most of the film). Oh, she also begins to fall in love (somewhat) with him (of course, only AFTER he saves her from vicious wolves and gives her a library featuring thousands of rare books).

A magic mirror, however, shows the crazed father in trouble so, because the monster believes in the old Sting adage that if you love someone, let them go, he frees Belle and the entire wait-staff goes into a deep depression. This ends, though, because Gaston has whipped a mob into frenzy and leads them to “Kill the Beast” (no, he actually does, because this is the title of one of the many Alan Menken songs culled from the original). Once inspired, the haunted furniture (including a clock butler, Ian McKellen, “Mr. Holmes,” a French candlestick, Ewan McGregor, “T2 Trainspotting” and a teapot, Emma Thompson, “Saving Mr. Banks”) begins to defend the castle and thanks to some otherworldly shenanigans, kicks the evil group out.

All except Gaston, who has gone in search of the Beast and at first throttles the down-in-the-dumps monstrosity who is still pining for Belle. When she appears, however, he is super-motivated and begins to fight for her love.

Is this Beauty and the Beast better than or as good as the first? Well, as previously written, it certainly LOOKS wonderful, and as directed by Bill Condon (“The Twilight Saga: Breaking Dawn – Part 2”), captures some of the essence and fun of the first, but, on the other hand, it also made this author remember more of why he loved the original than this live-action remake. It was not a fatal flaw, however, it’s just that the vocal talent of the first (Robby Benson, Angela Lansbury, Paige O’Hara, Richard White, David Ogden Stiers, Jesse Corti, Jo Anne Worley and the late Jerry Orbach, among others), still holds a very special place in my heart.

Another thing that was a bit off-putting (and I mean this in a strictly historical and filmcraft way), the film seemed to go out of its way to stamp our current morals, mores and politically-correct culture to events supposedly taking place in 18th-Century France (with minorities holding high positions in the Parisian Court and even an openly gay character introduced). Hey, I understand about sensitivity and I don’t want to sound like David Duke here, but for the sake of some bit of accuracy, come on.

Anyway, this updated Beauty and the Beast is no doubt destined to rake the big buck at the box office and I certainly hope it does. To me, though, it just misses the magic and majesty of one of the greatest animated feature’s ever created. Not that it doesn’t try. 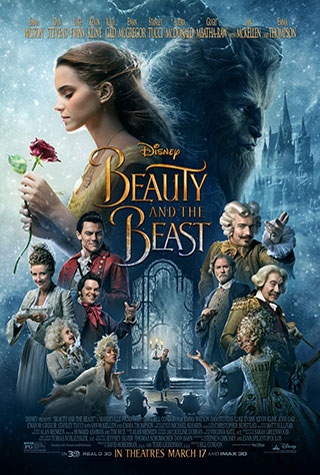