Critics (and others I suppose) have been gunning for this film, Pixels, long before it hit the big screen and not without good reason. First of all, anything with the name “Adam Sandler” attached to it pretty much means movie disaster. Recent examples include “Just Go With It,” “Bedtime Stories,” “Jack and Jill” and the “Grown Ups” franchise. Going back a little further and we get “50 First Dates,” “Punch-Drunk Love” and “Spanglish.” To be fair, though, there was also “Happy Gilmore,” “The Wedding Singer” and “The Waterboy” for just giddy, stupid fun.

Here, penned by Sandler’s past collaborators, Tim Herlihy and Timothy Dowling, Pixels is loosely based on Patrick Jean’s highly-regarded short film in which aliens attack the Earth by using classic video game characters. Sandler plays Sam Brenner, a childhood video game master who almost became the world arcade champion, but he lost to the diminutive Eddie Plant in the competitive finals playing Donkey Kong. He is supported in this devastating loss by fat friend, Cooper, and idiot savant (without the savant), Ludlow.

During that event in 1982, a video tape was evidently made and sent in a space probe to the furthest reaches of the galaxy, where 30-plus years later, aliens — who interpreted the act as a declaration of war — have sent back an invading force consisting of popular early computer games (Galaga, Space Invaders, Centipede, Q-bert, Frogger, Super Mario Brothers and the most popular arcade game of all, Pac-Man). The death and destruction of these weapons turns people into 8-bit cubes (think Picasso vs. Salvador Dali) and nothing on Earth can seem to stop them from declaring “Game Over” for humanity.

Meanwhile, Cooper has grown up to become Kevin James (“Paul Blart: Mall Cop 2”) and is now the President of the United States (talk about suspending all aspects of disbelief) and suffering poll numbers lower than Barack Obama when the attacks begin to wreak havoc. With little or no recourse (and because the script demands it), he sends for Sam, who is now a Nerd Squad member installing electronic equipment in homes, to help save the planet.

As in any Sandler movie, his “meet-not-so-cute” love stories drift off and threaten to overwhelm any fun this project might have. In this case, he comes upon the drunk and weeping figure of single mom (and Defense Dept. bigwig), Violet (Michelle Monaghan, “Expecting”) whose husband is cheating on her. Finally, though, the grown-up Ludlow (Josh Gad, “Jobs”), a conspiracy theory geek and Plant (Peter Dinklage, “X-Men: Days of Future Past”), a perverted federal prisoner, are reunited to become the “Arcaders.” After suffering two “losses,” the world rebounds when these misfit world defenders defeat the aliens in Centipede and Pac-Man.

Of course, President Cooper’s poll numbers rise until a wrinkle (that is never really fully explained) puts everything on the brink again. At this point, look for hundreds of one’s favorite game characters to assault the world while our “Ghostbusters” even have to penetrate the Mother Ship to try and end this debacle.

And while Pixels is basically a low-rent “Wreck-It-Ralph,” there are enough moments of recognition for any gamer (or really anyone) who grew up in the 1980s to appreciate the effort. Another fun touch is that the invaders send messages to Earth consisting of videos of that eras personalities and celebrities, including Ronald Reagan, Max Headroom, Hall and Oates, Madonna and the cast of “Fantasy Island,” among others. 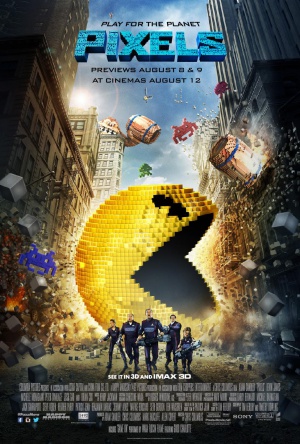