“In life, there are many different paths to choose from. Some choose a common path, some choose a path less traveled, and some choose a path unknown.” In Steve Hudgins’ The Caretakers, some have chosen to protect the undead — vampires — and dedicate their lives to providing safety and food for them. One such caretaker is aging, life-weary Jack (Nick Faust), who has been watching out for the powerful vampire Catherine (April Jennings) since he was a young man, and is now training two new apprentices in his life work. Another caretaker is Jimmy (Michael Coon), who has just recently taken on the job, after rescuing his friend Rachel (Brittney Saylor) from Catherine’s clutches. Rachel was kidnapped and brought to Catherine’s home by a supplier — someone who collects young women and delivers them to vampires for food. Having been bitten by Catherine, Rachel has become a half-human, half-vampire hybrid, and Jimmy now spends his days searching for safe places to hide, and finding people for her to feed on, so she can keep her ever-growing hunger under control.

Naturally, Catherine wants Rachel back and is closing in on her; at the same time, Rachel’s father is also searching for his daughter, and the race is on to see who can find her first.

With The Caretakers, writer and director Steve Hudgins creates a world that works, somewhat successfully, to re-imagine the rules of vampire lore and put a new spin on what we already know. In educating his new apprentices, Jack explains that humans don’t become vampires from being bitten as widely believed. When a pure-line vampire bites a human, a kind of venom is injected into the bloodstream, creating a kind of human-vampire hybrid (like Rachel) whose purpose is really only to serve as a food source for the pure-line vampire. Once this supply runs out, Catherine moves on to a new location, finds new suppliers, and Jack’s role of filling and maintaining the cache of young women begins again. This means, of course, that someone will be looking for the girls, and in this case, Rachel’s father (played by Bill Johnson — famous for his role as Leatherface in “Texas Chainsaw Massacre 2”) has hired some specialists to find her. These specialists (Jessica Dockrey and director Steve Hudgins) are managed by Parker (Joe Estevez, doing an unintentionally spot-on impression of his older brother Martin Sheen) and serve as part of the humorous secondary cast.

In fact, the secondary characters really carry the film; with the exception of Nick Faust’s Jack, most of the main characters are very poorly acted and come across more as cheesy extras than authentic people we worry about. Saylor’s Rachel is a silly caricature of a vampire — hissing at the camera and, on occasion, growling at people who might come near her food. As her caretaker, Michael Coon tries to play an earnest, sweetly honorable Jimmy, but his outbursts turn out to be more comical than tense. Jack’s apprentices, father-daughter duo Scott (Kenneth R. Root) and Jodi (Lucy Turner), are more awkward and in-the-way than they are eager-to-learn and attentive to the ways of their caretaker mentor. Some of this awkwardness is explained away by their backstory, but those scenes are just as awkward and forced. Thankfully, these scenes and characters are balanced by performances by Faust, whose world-weary Jack strikes you as loyal, knowledgable, and patient, and Jennings who brings the regal Catherine to life through minimal movement, simple but very effective facial expressions, and a soothing vocal tone.

While some scenes are awkward or extraneous (or disappointingly rushed, like a few scenes near the end), overall, Hudgins’ complex story is pleasantly well-balanced. There are a lot of characters and sideplots to follow, but The Caretakers manages all of them very well, and neatly resolves each plotline. Despite being very low-budget, the film moves along easily, providing just enough backstory and explanation for each situation, and avoids overdoing any of the action scenes (a pitfall to which many other vampire films have fallen). Even though there’s a sizable helping of cheesy acting, The Caretakers still has enough quality characters and plot points to keep you entertained. Perhaps there are some surprises left in this dusty sub-genre after all. 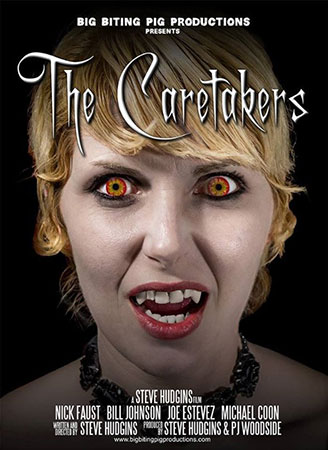