As you can tell I’m not a big fan of Will Smith. He thinks he is larger than life. Coupled with the fact that he has an asshole wife just solidifies my opinion of him. Granted I could be wrong about the man, but you’ve got to agree that Jada Pinkett is a fake. But back to the point. Hitch was a pleasant surprise. Although there have been similar comedies in the past, I found Hitch to put a refreshing take on the whole dating perspective.

Will Smith plays Hitch, also known as the Dating Doctor. He coaches men with low self-esteem on how to successfully meet the women of their dreams. It just so happens that the main character he is helping is portrayed by Kevin James. If you haven’t ever seen the “King of Queens” on the television, I encourage you to do so. This guy is fucking funny. And his fat overly white guy looks contrast perfectly against Smiths’ suave, street persona.

The movie has quite a few moments that you will find yourself laughing out loud. Watching Kevin James try to dance will cause you to have an aneurysm. Seeing Will Smith’s face explode due to an allergic reaction is just classic comedy. Most every joke in the movie works.

Of course Hitch wouldn’t be complete if there wasn’t a love interest for the Dating Doctor, who makes him realize the error of his ways and yadda yadda yadda . . .

Personally, I think they could have cast a woman better than Eva Mendes. Hell, I also think they could have broken the tried and true, cookie cutter ending of the movie lesson altogether too. But as the majority of Hollywood movies go, there always has to be something predictable and safe to end a flick with.

But in the end, I would recommend people to go to see Hitch. If not for the funny shit Kevin James does, then for the pick up lines and pick up scenarios Will Smith lays out for his clients. Let me know if any of them actually work for you. 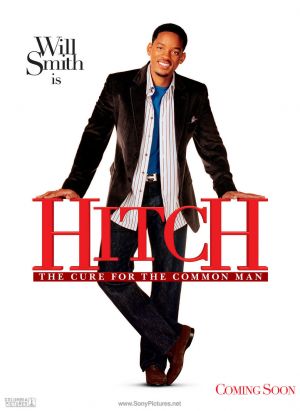