Let’s begin by saying I like Bruce Willis. Always have. Any man that bagged Demi Moore is alright in my book. So I looked forward to checking out his latest movie Hostage. How can Hollywood screw up a movie that seems so similar to one of the greats: Die Hard?

Movie starts off great. Motherfucker is the third word uttered during a hostage standoff gone bad. Very dramatic. I felt bad for Jeff Talley (Bruce Willis’ character) when the scene had ended.

The movie continues on a few years later with Jeff Talley still being haunted with the memory of the fucked up hostage negotiation . . . he’s got marriage problems, he afraid of taking command or taking chances, etc. You know the setup, it’s been done countless times.

So we know to expect another dramatic hostage situation, where Mr. Talley is forced to face his demons. We get that in the most ridiculously huge fucking house I’ve seen. The back of this house is built into a goddamn mountain! I’s got more secret passages than a carnival house. It’s got state of the art security, central cameras in all the rooms, panic rooms and a shit-load more I don’t even know what the fuck it is. That’s why I find it completely asinine as to how 3 douchebags climb the security fence and simply walk into the house without tripping any alarms or having anyone see them.

As it turns out Walter Smith (homeowner) is a shady bastard, so the people he deals with want something and force Bruce Willis to do their bidding, unless he wants his family killed. Quite the stupid set-up. The criminals behind this syndicate don’t need Willis’ character at all. Fuck, they dress up as FBI have access to helicopters and high powered assault equipment. Thoroughly unbelievable.

What’s worse is they clearly tell him, “Deviate from the plan and we’ll kill your family.” So what does Jeff Talley do time after time? Deviates from the fucking plan. Do they kill his family? Take a wild guess.

There is one bright spot in Hostage, however. Ben Foster plays a sick, demented character Mars Krupcheck. This fucker, shoots people and watches them die. Sets people on fire. Very dark, brooding and clearly marching to a different drummer.

Overall, Bruce Willis doesn’t fail to deliver, either. He proves he is still a great emotionally driven actor. He thrives on these kinds of roles (if you haven’t seen the Die Hard trilogy, you should be flogged). As stated above newcomer (to me) Ben Foster played his role to a tee. You couldn’t get Trent Reznor to act the part better.

The failure of Hostage is the absolutely preposterous actions our “hero” takes. A poorly contrived hostage swap, where he should have clearly been shot in the face by the kidnappers. Doing the exact opposite of what your families captors are telling you do, just doesn’t make sense. They should have been killed the moment he decided to do his own thing, and that was 20 minutes into the movie. Hell, the movie may have been better, if it suddenly became a revenge for killing my family flick . . . 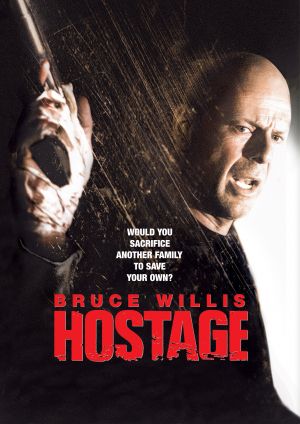