I didn’t think a comedy called Teenage Ghost Punk would be anything but a hot mess that tried too hard to be funny, but I was pleasantly surprised. It ain’t just funny; it’s uproarious, with a creative bent not often seen in the horror-comedy genre.

Carol (Adria Dawn, “Uncle John”)is a middle-aged divorcee who’s left her old life in Michigan behind for a new one in the Chicago area. With her are her two kids, precocious and pretentious 12-year-old Adam (Noah Kitsos) and 16-year-old popular cheerleader Amanda (Grace Madigan). Neither is pleased to have been uprooted, but Amanda’s taking it particularly hard, having left behind her star-quarterback boyfriend and all of her friends.

We join the movie in media res, as a group of so-called paranormal investigators creep up a flight of stairs, filmed with an infrared camera, and a medium conducts a sort-of seance on the first floor. Each group finds some surprising results from their efforts — spoiler alert, they involve ghosts — which dumps us into the movie proper, into a story beginning a bit earlier.

Amanda has a little trouble fitting into her new school, what with no friends and all. An oddball named Squatchie (Jake Shadrake) befriends her, but Amanda’s still stuck on her “popular” image and blows him off. She does find a way onto the cheer squad after making friends with Jasmine (Miora Brumfield). Adam, on the other hand, has no problem charming the kids in his class with seemingly no effort. The charisma is strong with this one.

And then one day, Carol and the kids come home to find a card table, strewn with beer and liquor bottles, playing cards, and cigarette butts, in the middle of the living room. Carol calls the cops, who are inclined to believe that the mess is the work of teenagers. But it’s not long before Amanda realizes that there actually is a spirit in the house, a former resident. Eventually, she can see him, and she learns he hangs out — and haunts — with several other ghosties, each from different time periods. There’s a guy from the 1950s, another from the turn of the 20th century, one from the 1880s, and even one from the sixteenth century (he’s part Native American).

Well, without delving too much into the plot, Amanda spends a lot of time seeing her new beau — named Brian (Jack Cramer, “Dear Mr. Fidrych”) — even though no one else can. And of course, mom Carol blames Amanda for the messes left by Brian and his friends, who love to play poker in the living room.

See, Teenage Ghost Punk is a farcical comedy. The paranormal investigators and the medium show up again later in the film, each claiming they can rid the house of its apparent possession. (Sure, they believe there’s something spiritual afoot, even if sensible Carol with her sensible job doesn’t.) And one of the cops, played by director/writer Mike Cramer, takes a shine to the newly single Carol, who also has to fend of a fantastically stereotypical chauvinist of a coworker. Like the main characters, these secondary characters are played with real zest and passion, something not often seen for minor roles in a low-budget film.

There’s much to love about this movie. The cast is engaging and works from a fine, quick-moving script. None of the characters seem absurdly predictable or mere afterthoughts. The main characters, in fact, seem very real, very relatable. Cramer could have taken the lazy approach and made everyone sort of generic, like the overbearing mom, the bratty little brother, the stuck-up sister, the snobby classmates. But he didn’t. And boy, do the actors ever nail their roles. Kitsos, as older-than-his-years Adam, is a true delight in what appears to be his film debut. Fun activity — check out the t-shirts that Adam wears throughout the movie. There must have been a dozen, each with a different witty saying. And Madigan, in the central role as Amanda, is captivating and appealing.

Maybe I didn’t have exceptionally high hopes for this, but the film vaulted past those expectations into the realm of pleasingly funny ghost comedy. Well cast, well directed, and especially well written, Teenage Ghost Punk is good spooky family fun. 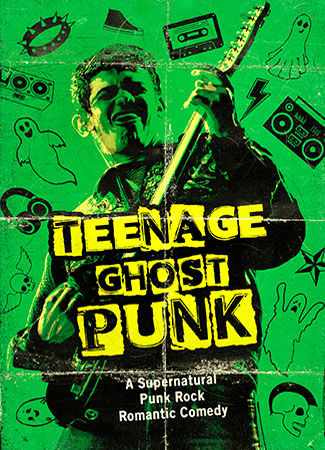