According to a 2013 census, 20.7% of Israel’s population are Israeli Arabs, citizens of Israel who consider themselves Palestinian by nationality. The problems that arise from these conflicting allegiances are dramatized in Eran Riklis’(“Zaytoun”) film Dancing Arabs, a title that denotes those who have to straddle two cultures and “dance at two weddings.” Based on the semi-autobiographical novel by Sayed Kashua (who also wrote the script), Dancing Arabs, known also as “A Borrowed Identity,” was the opening film of the Jerusalem Film Festival in July 2014 and was scheduled to be released immediately, but was held back until now because of the war in Gaza.

The film, however, is not designed to stir up ethnic animosity but is rather a heartfelt coming-of-age story that transcends cultural barriers. Set in Tira, a predominantly Arab city in the Southern Triangle near the West Bank, the film begins in the 1980s. Eyad (Razi Gabareen), a brilliant young boy is praised by his father Salah (Ali Suliman, “Flying Home”) who recognizes his potential to achieve more than he did in his life. Salah himself attended university in Jerusalem but, after serving jail time because of political activity supporting the Arab cause, now works as a fruit picker.

When the class is asked in school what their fathers do for a living, Eyad says repeatedly that his father is a terrorist and refuses to change his mind even when he is hit repeatedly on the hands by the teacher, demanding he say that he is a fruit picker. When Eyad (now played by Tawfeek Barhom, “The ABCs of Death 2”) is of age he is sent to a Jerusalem boarding school where his experience of trying to fit in becomes the centerpiece of the film. As the only Arab among Jews, he is an outsider who must learn to speak a new language, study a curriculum weighted against the Arab point of view, and put up with teasing by bullies.

His difficulty with language is suggested by a scene in which Eyad pronounces the name of a rock band “Deeb Burble,” because, unlike in Hebrew, there’s no “p” in Arabic. As time passes, things begin to improve. One of the best scenes in the film is Eyad’s eloquence in a literature class, angrily pointing out Israeli literature’s inherent bias toward Arab characters, a courageous statement that even wins the plaudits of some Jewish classmates. Further, when an attractive, free-spirited classmate, Naomi (Daniel Kitsis, “S#x Acts”), takes an interest in him, they begin a relationship that grows deeper in spite of its being frowned on by society and both sets of parents.

As part of Eyad’s community service requirement, he works with Yonatan (Michael Moshonov, “Lebanon”) a wheel-chair bound victim of muscular dystrophy who loves alternative rock and has a wicked sense of humor. Yonatan’s mother Edna (Yaël Abecassis, “That Lovely Girl”) welcomes Eyad into her home not only for her Yonatan’s benefit but because she genuinely likes him. Yonatan can relate to Eyad’s feeling of being separate and apart from others, though the reason is very different. “Sometimes I forget you’re an Arab,” Yonatan says. “Me too,” replies Eyad. “Don’t worry,” his friend responds. “Someone will always remind you.”

Dancing Arabs is not a political film and the Arab-Israeli conflict remains marginal, only occasionally referred to when Eyad’s family, mother (Laëtitia Eïdo, “Article 23”) and grandmother’s (Marlene Bajali, “The Syrian Bride”) instinctively pull for Saddam Hussein in the 1991 Gulf War until they realize what he is up against. The film is basically about good people trying to make the most of a bad situation and the fact that they are so alienated from each other because of cultural and ethnic differences is a sad commentary on the lack of political will on both sides.

While people may expect violence in a film that deals with ethnic conflict, here there are no grand dramatic gestures that turn children into martyrs, only constant reminders of everyday barriers to a sense of belonging. Even when Eyad learns the language, repeats the Jewish version of history in school, and strives to become a model Arab Israeli citizen, he is reminded every day at checkpoints and roadblocks of his being different. The political situation in Israel has deep-seated roots and we know not to expect the issues raised in Dancing Arabs to easily resolve themselves, yet Riklis leaves several threads hanging and insists on a forced resolution that does not ring true. While this is a regrettable choice, it does not detract from a truly fine effort. 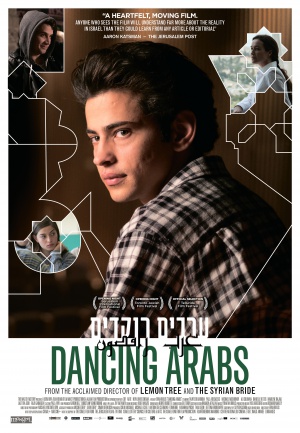