In a small village in Germany, a wolf lurks in the night, searching for food in neighborhood garbage cans, attacking pets, and generally terrorizing those who live there. Lonely, timid, and quiet Jakob Wolski (Michel Diercks), a local police officer, has taken it upon himself to lure the wolf away from people’s homes by buying meat from the butcher and hanging it in a plastic bag in the woods. He is teased for trying to befriend the wolf, and it’s made clear that he doesn’t possess the courage to actually track and kill the beast. In fact, once he’s left the bag of bloody treats on a branch, he whistles to it as if calling for man’s best friend.

It’s also made clear that Jakob isn’t well-respected in the area, as he’s taunted by a group of bikers for never using his gun. One evening, upon returning home, he finds a package for “Lonely Wolf” waiting for him, and soon after receives a strange phone call from someone asking if he had opened it yet. The caller claims the parcel as his own, and asks Jakob to bring it to him. When Jakob arrives at the meeting location (a dilapidated home, unsurprisingly), he discovers a strange, lanky, wild man in a white dress who extracts a samurai sword from the delivery. This titular samurai (Pit Bukowski) escapes, leaping in front of a moving train and leaving Jakob a bloody pathway to follow on a posted park guide map. He, too, taunts Jakob, yet, at the same time, he tempts Jakob to join him and to release his own dark repressed urges . . .

Written and directed by Till Kleinert, Der Samurai is a strange trip of a horror film — at times darkly hilarious, and at times psychologically troubling. The editing and camerawork are well-executed, with some really great parallels explored between Jakob and the strange man he pursues. Jakob’s journey through the night figuratively and literally changes who he is as the samurai lures him further out of his comfort zone and into his wake of wanton destruction and murder. Jakob claims those killed are innocent victims; the samurai calls them “miscreants” who are holding back from their true purpose — they are “corks” holding in their spirits. The spattering of these village folk are empty placeholders who serve no purpose other than victimization, because Der Samurai is all about Jakob’s cat-and-mouse chase; what’s unclear, however, is which role he truly plays in the game. A game in which the cross-dressing samurai’s smirks and intense stares sharply contrast Jakob’s wide-eyed dedication to protecting his village.

Der Samurai is a movie worth seeing even if you’re convinced you’re over the werewolf horror trope. It has its flaws — the story plods along clumsily in some parts and there is an initial struggle to figure out the central focus of the film — yet there’s merit in the main performances (Bukowski inhabits his role hauntingly well) and overall staging. While there are certainly some odd moments that make you chuckle to yourself — even aside from the ubiquitous samurai beheadings — Kleinert’s short psychological tale is one that demands your attention throughout and remains with you well after the credits begin to roll. 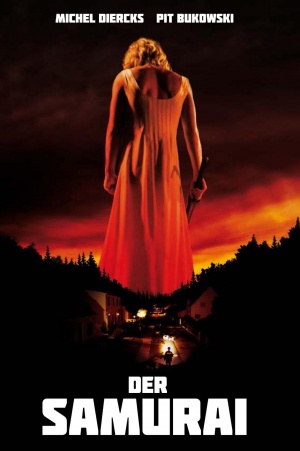