London. One of the nerve centers of world government. Home of the Houses of Parliament, St Paul’s Cathedral and Buckingham Palace. Home of black cabs and the Tube. Home to a thousand nationalities and one of the most cosmopolitan metropolises in the world. Home of the elastic ruler, the clockwork lamppost and the inflatable knitting needle (according to some). Setting of such movies as “Spectre,” “Mission Impossible: Rogue Nation,” “The Mummy Returns,” “Layer Cake,” “The Long Good Friday” and many more. And the setting of Michael Apted’s Unlocked, a spy thriller that offers much familiar territory, especially for a Brit.

Unlocked introduces us to this iconic urban landscape through an opening montage that cuts between Londoners making their way through the bustling streets to tourists eagerly snapping pictures of the famous sites. Within this hubbub of humanity we find Alice Racine (Noomi Rapace, “The Drop”), a community center worker who advises people of Middle Eastern extraction on housing and employment issues. It quickly becomes clear that Racine is more than she seems, as word of a large group of Egyptians sharing an apartment leads to a late evening meeting with Emily Knowles (Toni Collette, “Krampus”), their discussion covering Langley, MI5 and terror suspects.

All of this happens early in the film, and anyone who saw the trailer or indeed the poster will likely be waiting for the generic thrills to kick in. Racine and Knowles’ meeting is followed by a similarly covert encounter in a restaurant between a young courier and an Iman, a ruthlessly efficient abduction and the obligatory scenes at Langley, where CIA division chief Bob Hunter (John Malkovich, “Deepwater Horizon”) grills his team about missing dinner with his wife, before moving onto the important business of intel, assets, interceptions and other such jargon. Before you can say Jack Ryan, the reluctant agent with a troubled past is dragged back onto the job, things are revealed to be more than they seem and loyalties and alliances become at best tenuous.

These are the generic tropes of the spy movie, and how well it works depends on how effectively these tropes are handled. Apted previously directed Pierce Brosnan’s third James Bond film “The World Is Not Enough,” but the register of Unlocked is closer to Doug Liman’s handling of “The Bourne Identity” (and calmer than Paul Greengrass’ frenetic rendering of the later installments in that franchise). Stylistically, the film opts for a grounded realism, eschewing the more outlandish stunts in favor of gritty unarmed combat sequences and fairly contained gunplay. Racine quickly demonstrates that her skills go beyond interrogation, but she is not granted the superhuman abilities of James Bond or even Evelyn Salt, sometimes needing help from various allies including a somewhat buffed up Orlando Bloom (“The Three Musketeers”) as London burglar/ex-Marine Jack Alcott. Alcott and Racine make for an engagingly mismatched pair, while Racine also finds aid from local lad Amjad (Tosin Cole, “Star Wars: The Force Awakens”).

The film’s groundedness, however, is sometimes at odds with the twists and contrivances of Peter O’Brien’s screenplay. Reminiscent of such thrillers as “Three Days of the Condor” and “The Long Kiss Goodnight,” Unlocked uses a tried and tested formula that does seem appropriate for the current political climate (although a picture of Obama in Hunter’s office does date the film somewhat). At times, however, the sheer intricacy of the conspiracy seems too pat and monologuing villains do stretch one’s patience.

The film does make good use of its setting with various street level encounters and a palatable sense of Racine being a ground level operative. This is quite impressive as, despite its London setting, much of the film was shot in Prague, and a sequence in the Czech capital feels like a tacked on deviation into another film and suggestion of a franchise. That said, Apted’s direction is gripping and at times visceral, and while the film is thoroughly unremarkable it is perfectly proficient. Furthermore, it is pleasing to see a spy thriller where the women are more capable than the men, largely because of their willingness to listen and investigate rather than simply assuming they know best. Key to this progressive sense is Rapace, who continues to deliver on the promise she showed in the “The Girl with the Dragon Tattoo” and continued with the subsequent films in that series (“The Girl who Played with Fire” and “The Girl who Kicked the Hornets’ Nest”), as well as “Prometheus” and “Child 44.” She is capable of communicating a great deal with only a slight look, while also demonstrating compelling physical prowess in the action sequences.

Unlocked may not develop the spy genre in new directions like, say, “Spy” or Bourne, but it is a solid entry in the genre and a fine showcase of Rapace’s very particular set of skills. 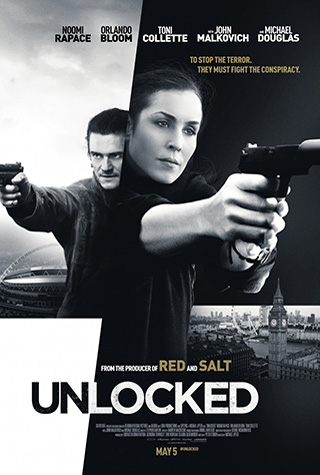