Every Christmas season, two categories of people emerge from their Thanksgiving comas: Those who identify with Buddy the elf and those who identify with the Grinch or Ebenezer Scrooge. Some start listening to Christmas music before Halloween; some “Bah, humbug!” their way through shopping malls and tree lots. Yet, there’s also the forgotten few who split the difference — those of us who love Christmas specials (but only after we’ve finished our turkey) and who prefer holiday movies of a darker, more sarcastic fare, like “The Ref” or “Die Hard.” Krampus is a aimed at us — the cynical few who love sitting in the glow of a Christmas tree while watching the “All Through the House” episode of Tales from the Crypt. However, while Krampus certainly fits the bill of cynical dark horror humor, it too often crosses the line from B-movie sarcasm to silly, eyeroll-inducing stupidity . . . and not in a good way.

The opening credit sequence delivers scenes of customer chaos in a big box store, backed by the now clichéd ironic usage of classic Christmas music, culminating in a fight between two young performers in a children’s Christmas pageant. Returning home, parents Sarah (Toni Collette, “The Way Way Back”) and Tom (Adam Scott, “Sleeping with Other People”) chastise their son, Max (Emjay Anthony, “Chef”) as they prepare for the impending arrival of their relatives. As Sarah straightens family photos, Max and his Omi (Krista Stadler, “Lemming’s First Case”) wrap gifts and eat Christmas cookies, enjoying some old-fashioned traditions on a commercial holiday. Everything goes downhill once the cousins arrive, and Linda (Allison Tolman, “The Gift”), Howard (David Koechner, “Anchorman 2: The Legend Continues”), Aunt Dorothy (Conchata Ferrell, “Two and a Half Men” TV series) and the kids throw Sarah’s home into chaos. Taunted at dinner about his letter to Santa, Max tears the letter to pieces, wishing everyone away and hoping for things to return to the way they used to be. This simple wish calls forth a thousands-of-years-old creature known as Krampus — the shadow of St. Nicholas, as we’re eventually told by Omi — and his “helpers” who come “when hope is lost, belief forgotten, and the Christmas spirit dies.”

Krampus is a movie that could have been a lot better, but also a lot worse. Billed as a horror movie, there’s no real tension and the jump scares are shallow. The characters aren’t anything special (which isn’t the intention, of course), but when you don’t care about ANYONE, you simply don’t care what happens to them. Every person in this movie is a caricature of every annoying family member in every holiday movie that’s come before. There’s some attempt to put some warmth into Max and Omi (who was really the only interesting character in my opinion — and that includes Krampus himself), but it’s all insignificant to the invasion by the “helpers.” The creatures that descend upon the family home range from homicidal gingerbread men and a taloned teddy bear to a mutated Jack-in-the-box with black holes for eyes and an angel reminiscent of Chucky’s bride, Tiffany. The attacks are over-the-top and ridiculous, with a sleighload of camp and zero scares.

The average moviegoer looking for a scary good time will be disappointed by this one; Krampus provides no terror, but definitely delivers on absurdity and goofy gimmicks. The B-movie fan who knows what to expect will probably enjoy this more than most. It might be the shortcomings of a PG-13 rating, or it might just be that I’ve seen too many cheesy horror films in my day, but Krampus fell flat for me. I wasn’t expecting sheer terror, but the creatures and mythology didn’t deliver, either. I think I’m just going to stick with Cousin Eddie this year. 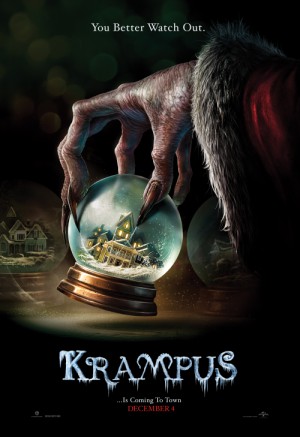