Güeros is the kind of movie that makes you homesick. On the one hand, it makes you feel an inevitable nostalgia based upon reminiscences of sensations, tribulations, percolations probably taken for granted before they were missed for the first time. Voices, tones, phrasings of a City that homes you as much as it repels you. And this is what in the other hand lies, always, for this is a city that unmistakably faces one hand against the other: It makes you sick of your home, of remembering it, of acknowledging how unlivable it was and how hostile it could be. A City that begets you as much as it aborts you. For Mexico City is a city of contrasts, of constant contrasts, of infinite inconsistencies, of continuous conflicts coexisting without any further questions. Here — There the best and worst of humanity coincide. Often at the same place, at the same time, inside the same person, the same chilango, dweller of the Distrito Federal (DF) coming from elsewhere.

Güeros is the kind of movie that makes you homesick, particularly if you ever lived in Mexico City. And a chilango I am.

If you ever lived in Mexico City, chances are you always loved Mexico City. Tomás (Sebastián Aguirre, “A Monster with a Thousand Heads”) learns it the only way the DF lets you learn: The hard way . . . and the soft way too. A newbie chilango recently moved (expelled by his mother, better said, who just can’t deal with him anymore) to the City, he gets to his brother’s place at an apartment complex in Copilco, a mammoth and old barrio in the South of the City near to the University, the National and Autonomous University of Mexico (UNAM), a place so big it harbors its own University City inside the City (and the Campus). His brother, Federico, better known as “Sombra” (Tenoch Huerta, “The 33”) is the shadow of the one who left Veracruz to study in the Capital. Living in a dirty, semi-deserted apartment with his roommate and friend, only known as Santos (Leonardo Ortizgris, “She Doesn’t Want to Sleep Alone”), he spends his days doing nothing and his nights doing less . . . for they don’t even have at that time the electricity they steal from their neighbors downstairs having their child with Down Syndrome as their main accomplice (exchanging flash fiction for functioning flashbulbs). During his breaks, Sombra fights intensifying panic attacks due to what seems symptoms of exhaustion. Because, yes, there’s hardly anything more exhausting than doing nothing . . . and anything more absorbing than living in limbo. Which is where Tomás joins his brother.

It is clear though that Tomás, the lively lad that he is, just can’t adapt to his brother’s routine. The brotherly relationship that kicks off the movie steadily morphs into a strange symbiosis between purposes and goals. Sombra and Santos are two of the many casualties of a student strike that has left many people literally unemployed and, more literally, purposeless. For what is a student without a school — and what a full time student for that matter? The strike very much resembles the one we had there 15 years ago, in 1999, which was as legendary as it was long. If it is true that this strike forced the Mexican government to abandon their project of charging for higher education (as higher education is a right all Mexicans have for free), it also forced the students, faculty and general population to reconceive the role of higher education in Mexico — and, in several cases, this revisioning was not favorable. Strike in Spanish is huelga, which comes from the verb holgar, or being hanging, though, more accurately, it would translate as being idle. Idleness became the new form of education, having an idle mind, an idle talent, skill, workforce without a work where to employ them. And in Güeros, we go from huelga to huero (sterile, infertile, spoiled) to güero (blonde-haired or light-skinned or, as it is applied most often, anyone of a higher class than yours or better educated than you). From huelga to huero to güero. A huevo! — ya betcha!

The result of having such a good education system in such a poor economic reality is to have many (as many of 13% of your population) very bright, very well-educated people underemployed or unemployed altogether, most coming from working class families, most of them low-income, that grows into a very well-educated resentment. You just have to be at the UNAM once, going through their magnificent murals, painted by the great muralists, perhaps the best known there being Siqueiros’, one of the banners of the ultra-left (Stalinist), and see those passages there repeating themselves over and over again (massacres like the one in 1968 where the military killed hundreds of students, or another one, much more recent, just a couple of years ago in Ayotzinapa, in the State of Guerrero, where the police murdered 43).

And we come back again to the City, the City, as it is called both by those who live there and those outside of it (but always in different tones), which is the true surreal city. This is not a hyperbole of my own, or an assessment I made up; this was Luis Buñuel’s dictum the moment he put a foot on DF’s floor. Da foot. He used to say that as a surrealist in Mexico City there is nothing to do but to take a camera out and film whatever you find; odds are you’ll find surrealism at its best. And this is true, so very true. Description is, in Mexico City, a form of creation.

This is the origin of homesickness in the DF: da World Capital of juxtaposition, da international navel of bipolarity. I grant you that other dwellers of some equally entropic, mammoth cities would claim this title, cities like Cairo, Tokyo or New York. That I grant, but do I care? Of course I don’t! Because this city, Mexico City, with its palaces and parks and avenues and boulevards and landfills and slums and cathedrals and street markets and malls and traffic jams and I should add this is the place where interruption reaches its highest or as close to the highest something can be, because, please do ignore syntax for sentence structure is just a way to mask the labyrinth language is as this was invented by people with bad memory, who as a staple forgot what they were about to say yet sugarcoated it by making it a point while figuring out in the meantime what they really wanted to say. So this point I won’t grant. Mexico City, as other than any other city, is the global hub of interruption. And, as we see in Güeros, this is a place in which everybody is used to never finish a story and to never see one to its end — it should suffice to say that this is the birthplace of Cantinflas, the genius comedian who’s most famous for talking much and saying nothing; that is, for being a true chilango.

Yet we always arrive where we were going to, if by chance. We find our point or come back to it or arrive to our destination the same way Columbus stumbled upon his — and sometimes we also insist in calling it the Indies. But to do so, we take as well many wrong turns, get into many dead-ends, take long detours that likely lets us facing the unknown next to the unknowable. And we back off, if we can. For this is another thing you can’t forget while you’re in the City, and something that Güeros, now a road movie, portrays with painstaking accuracy: We’re always a wrong turn away of ending up completely lost or of finding ourselves at a life-threatening situation or at a life-changing event — robbed, knifed, kidnapped, welcomed, aided, fed and clothed. Either can happen at the same place, at a different time. It will all depend on our luck. This is the city for which road movies were made.

But this is also the place for which futile enterprises were created. And this is where Tomás’ purpose ignites the movie with an uncanny telos. In the same tradition of Roberto Bolaño’s work (perhaps the most well-known would be the example of The Savage Detectives), which exemplarily revisits the tradition of the Quixotesque (being the Quixote the first road movie ever, so much so it came almost 300 years before films were invented, and also the first meta-fiction ever written: The first self-aware text), Güeros revisits the motif of the futile enterprise, the result of which is of no interest whatsoever — only the journey is. After reading a marginal note in the newspaper saying that his favorite musician (and his brother’s and, more importantly, his father’s) and folk hero Epigmenio Cruz was very ill at a public hospital, Tomás convinces his brother to embark on a road trip within the city that will take them through mysterious ways and help them reconnect amidst themselves and with themselves. As they go, Sombra even gets to have his lifetime crush, Ana (Ilse Salas, “The Last Call”), joining them and reconnecting with what was a missed opportunity in the past. Past the opportunity, they go to search for this fictive hero who, legend has it, “made Bob Dylan cry.” Yet this is not the only tradition that Güeros revisits, its self-awareness as a text, its continual winks to its artifactuality as a work of art existing in a fictive, though parallel, universe, takes this right at the core of the Quixote, and right at the core of the Quixotesque quest in which they all embark.

It is the search of the myth, of the hero, of the larger than life figure that moves these characters living in limbo, but also dwelling a City that embodies everything they were looking for. This is the real search: The myth is created as the legend is sought. The least interesting part comes when the legend is found. And this should be clapped and clapped and celebrated, as we join our hands for first-time director (who has won almost every first-timer prize there is, including a Golden Bear in Berlin) Alonso Ruizpalacios and to his pen-buddy Gibrán Portela. The 10 years it took to develop the idea into a script and the script into a film is the pursuit that the movie tells, that the movie is, if by other means.

How much did I miss my City while I was watching this film, and how relieved I felt I wasn’t there anymore. Güeros is the best portrait of Mexico City since Buñuel’s unforgettably accurate portraits, or not even since Alejandro Galindo’s pastoral tales. Because, as happens with all myths, this is a place that needs no more than being traveled to be discovered — over and over again. Its description is its invention. Its invention is its real state, its true home: The moving target wherein all myths come to rest their feet at the end of a long journey. 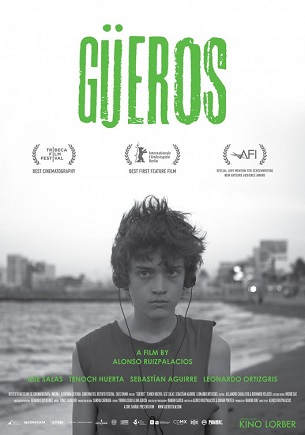