It’s funny what language can do, the unintended irony behind words and concepts and colors that were likely never part of any authorial intent. But, then again, maybe they were. That’s the inexhaustible fertility of art; it transcends, whether it wants it or not, intentions.

That’s the case with Spanish, still sprouting in a place that once was a Spanish-speaking territory. Florida in Spanish means flowerfull, or full of flowers, flowery maybe. It used to describe a landscape that perfectly matched its language, the flourishing nature and exuberance of Spanish words, so full of qualifiers, the flowers of language, of landguage.

And that’s the last you see in The Florida Project, a place abandoned, almost floating on the swamps that corral Orlando’s fringes, the fringes where homelessness finds weekly refuge. The irony is undebatable. Then it opens. Three kids sitting, between boredom and buoyancy, biding their time while plotting their next prank. Little rascals of the 21st Century.

Pastel tones paint a playful stare, ours, on a screen that projects nothing but despair, if in disguise. Pastel has a double meaning in Spanish, as it also means cake, retaining the dilogy that swings between friskiness and joy, the sugary promise behind the dreams of almost every child’s teeth. Both meanings are always attached to childhood, to celebration, to a place in time where reality is suspended, where nothing else matters; it is you and yourself and no one else to worry about. A children’s game.

At these places, names match not, as language betrays the thing it names with an unforgiving sarcasm. Moonee and Scooty live in the “Magic Castle,” a dump that, bright colors notwithstanding, is as magical as stagnant water in a can of sprite — and just as royal. At the fore of this cheesy castle there is a sharply hostile environment that neither words nor colors can pretty up. On the contrary, these look like swift brushstrokes over a deeply troubled canvas, crisp and wrinkled, extending over ever-growing rough edges. Only can a child go by without noticing the dire surroundings of this façade, and only can they drown depression in entertainment, hunting every piece of it as though it were the last. Little wonder should it be, for this canvas sits right at the margins of the magic kingdom, the happiest place on earth, the very site that was designed with fun and only fun in mind, the world that Disney concocted over swamps that never got to tell their part.

Director Sean Baker does exactly that. As he did with his outstandingly beautiful “Tangerine,” he gives voice to raw reality to chew and bite the silence with which it is met in everyday America, where bystanders and passers-by wave their eyes while they think about more important things. The kind of eye that condescends on them, passes judgement, and wraps it in a sort of elitist argument that has created such a chiasma that populists and assholes have been able to use for years to undermine the value of education, to make it synonymous with useless snobbery, cashing in on they call “real America” — the America on behalf of which they, ever-so condescendingly as well, speak. But how few are both sides of the aisle willing to listen. With his second film, Baker does just that, again, lend his ear for us to make all the listening.

True, unlike his previous (and first) film, most of the cast of The Florida Project is not part of the bunch they represent. But, like in his previous work, this film shows such an acute, observant, compassionate eye that the dignity of every character floats at every corner of the photogram. In the first place, the frame is not a melodramatic one; the pastel tones do deliver on what they promise: Fun.

Moonee belongs to a band of misfits living in what has to be the most stressful alternative to public housing. We catch her in the summer, with tons of time in her hands, and with little other motivation in life than annoying other people. The comedy we find in her, and in her just as carefree and careless mom, Halley (Bria Vinaite), stems from the same source from which slapstick sprouts: Ridiculing others. In Spanish, slapstick comedy is called pastelazo, which would translate as “being caked” because of the cake scenes that inundated silent comedies in the early 1900s. In a sense, this kind of comedy dwells in children, based on repetition, troubled and annoyed faces, even anger — but, at the bottom of it all, there is always innocence. Pastel is easily the very tone of childhood, particularly for those who had no infancy, the place in which mother and daughter meet as almost absolute sisters — complete accomplices.

The relationship between Moonee and Halley is at the heart of The Florida Project, a companionship so leveled, so even, that is barely inappropriate. They both live in a make-believe world, the mother lazing in bed when she’s off being a little girl. That’s her true kick in life. When we see Halley trying to be an adult, she’s as inadequate and offbeat as those she so effectively mocks when she’s back to her extroverted child.

But the alternative around is not that much appealing. Other than having a steady source to pay the $245 rent a week (anything but cheap, even more so for the shack they’re in), adulthood is in no way enticing. Those “responsible adults” around Halley and Moone are defeated people, with the spark of life sucked dry by day-in-day-out purposelessness. Perhaps the greatest embodiment of chronic disappointment comes by way of the best-natured person available. Bobby (Willem Dafoe, “A Most Wanted Man”) is a good-hearted general manager who has as his main virtue not to hold against anyone the nothingness to which his life amounts. With one of the most unassuming and creative performances of his career, Dafoe is able to convey that feeling of defeat in no more than a couple of scenes. Yet he’s just as much convincing as a man who’s hopeful that those around can do better than him or, if not, they can have an easy time while they’re there. For all tenants in that place are temporary residents. He knows it well, having seen them parading in all sizes and shapes over and over again. For better or worse, they’re all just passing by. What we see at such comparison between children (age aside) and adults is a landfill painted with pastel colors over a truly tragic canvas, with bad people and worse people lingering around like gators in the mud. With bad and rotten apples. With leftovers. But with joy and kindness and genuine sense of solidarity as well. That is all part of this inclement landscape.

The Florida Project is thus a beautiful ode to childhood, to the resilience that those eyes have against a harsh reality, to that point in time when there were no responsibilities because there was no awareness. Halley is doubtless an irresponsible woman, as irresponsible a person she can be, but she’s also a loving mother, who wants nothing but the best for her child and would do anything to grant her a smile. The trouble is, smiles are as transitory as guests in a motel. When we’re up to suspend our judgement (an easy task as we’re introduced to this world through the eyes of three kids), we can see genuine bonds that can’t be broken by alien grudges, like those between Moonee and Scooty, or that can only be strengthen by trying times, like those between Moonee and Jancey (Valeria Cotto). This is how we get to realize that the tones of this film are real, that so are the lives therein portrayed, because those bonds and devotion are as sparkly as the resentment and self-deception from where they spring.

Childhood, real childhood, does not exist as a present moment. At that time, it is only life. Childhood is all about memory, the same that tends to color memories in pastel backdrops. As a mother, Halley’s only role in life is creating memorable moments for her daughter, moments of reckless joy at the midst of aimless anger, the centrifugal force that moves these two girls together on a daily basis . . . and then there’s that larger, centripetal force, inevitably deciding what’s best for them both.

As the child runs away, breaking for the first time in front of our eyes, revealing her fragility, a child’s true state in nature, running even deeper into the make-believe world she’s been told exists for her, and for her only, our adult eyes give a silent gaze and blink for the first time since it all started. 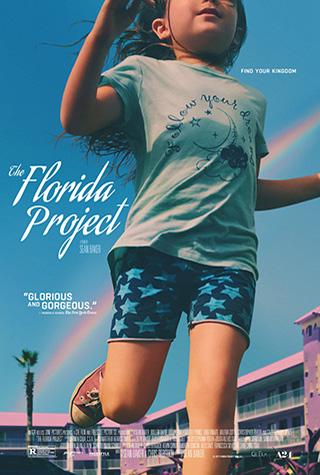