Let me start this review by saying Will Ferrell is a funny motherfucker. He single-handedly made “Saturday Night Live” funny again and all the recent movies he’s been in (“Elf,” “Old School,” “Anchorman: The Legend of Ron Burgundy”) were funny as hell. So I knew to expect similar from Kicking & Screaming.

Will Ferrell plays a father who unexpectedly takes over the coaching duties of his sons’ soccer team. During the course of the season he becomes his father (played by Robert Duvall); a win at all costs kind of guy. And of course at the end, he realizes the error of his ways, and blah blah blah. You can figure out the rest!

Sadly, this movie didn’t live up to my expectations. It was obvious that this was going to be a family oriented movie (so I knew not to expect any crass shit), but I didn’t find a whole hell of a lot to laugh at. Sure there are a few moments of brilliance, like when the kids show up to a game in bloody aprons, causing the opposing team to forfeit the game and when Byong Sun (one of the boys on the team) runs around with the toupee of the ref (David Herman, from “Office Space” fame). Overall though, the laughs are few and far between.

The casting of Mike Ditka helped Kicking & Screaming out quite a bit too. Although he didn’t have to actually act in the movie (he plays an asshole), it was still comical to see him holler at the kids as if they were his Super Bowl winning Bears. Funnier still was when it becomes apparent Will Ferrell becomes an even bigger dickhead than Ditka!

It’s safe to say, Will Ferrell gets his first black eye with this movie. Sure, it could have been worse, but more importantly, it sure as shit should have been better. You can safely watch all the previews on television to see 3/4 of the funny stuff and save yourself two hours. However, if you have a young one at home, those two hours probably won’t be wasted on them. They may find more enjoyment out of Kicking & Screaming than you undoubtedly will. 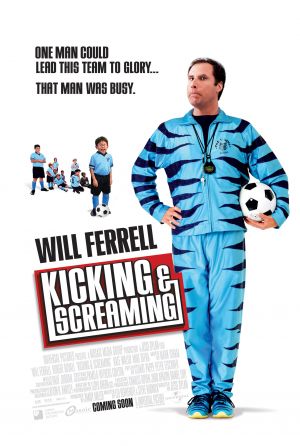