Let’s start by saying Star Wars: Episode III – Revenge of the Sith is definitely the climax of Star Wars franchise. This was undoubtedly the movie every dork, geek and wanna-be has been waiting for. Darth Vader is born. Even I had to see exactly how it happens, even if I basically knew the who/what/where and how.

Thankfully, George Lucas has abandoned the bulk of the shitfest love story he tried to put together in “Star Wars: Episode II – Attack of the Clones.” He realized his shortcomings and listened to the fanbase. Hell, quite frankly there isn’t a whole lot of acting going on in this movie, period. Unfortunately, where there is dialogue, the acting is bad. Hayden Christensen (Anakin Skywalker) is as bad of an actor as Ben Affleck is. Rigid, no emotional range. Natalie Portman (Padmé), whom I adore, once again puts forth a forgettable performance. There is no fucking way these two people are madly in love! My grandmother and I can generate more emotion than what was put to film.

Luckily for us though, this movie is built for action. Battles upon battle, fights upon fights make up the bulk of this movie. Ewan McGregor (Master Obi-Wan Kenobi), kicks the shit out of several Sith (you’ll love the last battle). Samuel L. Jackson (Master Mace Windu) finally earns his keep after he puts an ass-fuckin-whoopin’ on Supreme Chancellor Palpatine/Darth Sidious (played by Ian McDiarmid). Even our CGI buddy Yoda kicks some major ass. You won’t be disappointed by the turn of events. Most unanswered questions from “Star Wars: Episode IV – A New Hope,” “Star Wars: Episode V – The Empire Strikes Back,” and “Star Wars: Episode VI – Return of the Jedi” are answered, and in most cases make some sort of sense.

There were things other than the acting I found annoying. It seemed every 20 seconds there was a fade to black cut scene. And not just a simple fade-outs either. Every type of fade was used in the movie: Horizontal left/right, vertical up/down, block and circular (among others) was used. You’d think George Lucas never used a camera before and wanted to see what all those nifty effects were! Also I found myself aggravated by just how quickly Anakin Skywalker turns to the “Dark Side.” It literally happens like a flick of a switch. It just seemed so obvious that Supreme Chancellor Palpatine/Darth Sidious was talking out of his asshole the whole time, that I found it incredulous that Anakin believed him.

That aside, Star Wars: Episode III – Revenge of the Sith definitely delivers what it promised. Jedi fights, blossoming evil (Darth Vader) and few love scenes. If you are a fan of the Star Wars empire than I would 100% recommend seeing this film (you probably already have ten times by now). For those of you on the fence, I’d recommend this movie above the rest of the saga except “Star Wars: Episode VI – Return of the Jedi.” See the movie and enjoy it for what it is, the final piece of a great story. 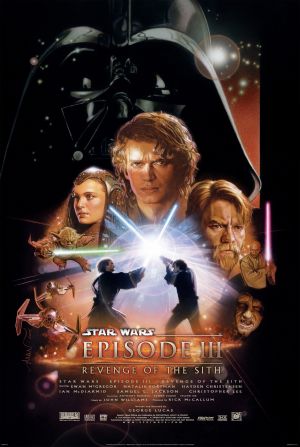