“Heaven. Heaven is a place. A place where nothing, nothing ever happens” — Talking Heads, “Heaven”

So, you’ve just been suspended. Suspended in time. In space. A literal suspension that leaves you wandering around everywhere and nowhere all at once. That prolonged feeling we sometimes, sadistically, seek (sick!) when watching a horror flick. True horror is lived within those seconds of true suspense, an interval during which we’re almost certain of the fatal fate the situation we’re seeing is about to find, but completely, entirely, absolutely, totally ignorant as to when and how. A murder scene is usually met with a rare mix (more of a strange simultaneity) of repulsion and release, rapture and horror. Now at least we know, we’re certain now that what we knew was going to happen finally happened.

There must be nothing worse then that to be left in such suspense when it is your life that’s hanging there, left hanging, in hanging — not knowing when or how you’re fate will be decided. There’s nothing worse than an indefinitely prolonged period of pure suspense.

The words that open Problemski Hotel, experienced documentarian Manu Riche’s first fiction feature, couldn’t be any more illustrative of the toll a prolonged suspense can take: “If you’ve got to die, once you’re dead, let’s hope you stay dead; the last thing you want is a fucking afterlife where you start by applying to asylum.” That sums it up — not only the film, but the experience of being an asylum seeker: The smallest hint at bureaucracy loosens all the bolts a mind might have only to break it through regressive flashbacks. And what’s the afterlife after all if not the queue to get inside the place we’ve been applying to all our lives?

Asylum seeking, however, is worse than the afterlife, for the seeker always comes uninvited, unexpected, to the place they’re claiming theirs — not as a home, but as a refuge from certain death. To the afterlife, we arrive at least expected, indubitably invited, and with the card of our deeds when we were alive — hoping their review system is speedier than the one we have on Earth. For those who developed the latter must had had their applications rejected and are likely making some time in hell.

The characters in Problemski Hotel are also making time — some, and then more. They are, however, making it at a place in which time has been suspended, a no-place that reduces space to its bare minimum: a spot where everything has a function yet nothing has a meaning. It is a place devoid of memory. A place that is meant to remain forever unfamiliar.

The asylum center at the outskirts of Brussels where these cast away characters meet is almost always empty, and yet it feels confining at all times. One of the running gags throughout the movie, running from the very opening shot, is the constant relocation of a Christmas tree for which the center’s employees and inmates are unable to find a spot. It is a dying tree, uprooted and hence condemned to dead, aimlessly ambling around a completely foreign place, a place it is supposed to garland while remaining static, an inert symbol, commodified and thus not a symbol anymore, but an ornament instead. And ornaments find nothing to adorn where there is just no place to get hung. Just a place to hang out. That’s what this “Hotel” is. Nothing else. Nothing more. A place where each and every character could be inadvertently exchanged with this tree. No one, nobody would notice. Maybe not even the character their self.

And yes, you read correctly, there’s a running gag, even though, we should say it right off the bat, this film is no comedy. There’s plenty of humor, though. Humor is to be found in this non-place, and very good one too. That’s, in fact, one of Riche’s main strengths. Though always odd, his sense of humor is never absurd enough to make it feel outlandish; on the contrary, both characters and situations always remain human all too human. And that’s what makes us feel for them, even though they keep so remotely sited from where we watch.

So, it is almost Christmas, a busy couple of weeks for bureaucrats before the holidays. For claimants, this is a season of hearings and final decisions, and it is within this period that we get to meet those dwelling this “Hotel.” We find a community marked by an almost accepted acknowledgement that all relations are provisional, temporary to the extreme. It is, nonetheless, an extremely diverse, even cosmopolitan place — a Tower where Babel diversifies its character of multi-ness. This is a multilingual, multicultural, multi-ethnic, multinational, multi . . . place, but, make no mistake, there’s not the slightest trace of plurality. All these multitudes are compartmentalized. It is a multi without an inter. For the fleeting nature of these relations, the suspended state that rules upon these tenants has made dispensability second nature. It is like watching a life-sized diorama of what goes on inside those containers we see day-in, day-out at the edges of a very busy basin. The “Hotel” is a port of entry and each claimant seems not so different of either of those closed containers.

The tone, even the humor of Problemski Hotel was arguably already present in Dimitri Verhulst’s novel on which the script is based. It is all therein contained. Yet one of Riche’s main accomplishments is to take what resembles a series of independent vignettes to introduce a narrative thread that lead us to care for the characters’ fates and actions much more than we would should we be reading the book. Also, the narrative template over which Riche works helps to get the point more viscerally across, get it to the gut, that these characters, seekers fated to wait, cannot afford the luxury of gradual, slow change — a right any person with some sense of belonging has without even realizing it as a right. And, though it is true that most immigrants have to undergo this process of fast change, of catalyzed adaptation, when we get to see the process as raw and in the flesh as with these claimants of bare space, we cannot help but deeply empathize with them — with all. They have to realize and understand their wrongs in a matter of days, hours, often times in a matter of seconds. While every native person, familiarized with the place in which they live, up to the point of taking their future for granted (or the fact that the future is what immediately follows the present), has the right not to be revolutionized, an asylum seeker is constantly caught at the midst of clashing revolutions, all taking place in amorphous sequences where before and after aren’t approachable arrays anymore — they’d stopped being proximate to each other.

Probably the character that best incarnates these qualities (or lack thereof) is the one that almost articulates the narrative into a coherent whole (if not the events therein being told). Bipul (the exceptional presence of Tarek Halaby) is a man who’s been condemned to the certainty of being forever claiming for refuge, a professional asylum seeker that is, as well, everyone’s connector during their stay at the center — the official host of an unofficial place. All these kind of changes, if not for long, when he meets Lidia (an endearing Evgenia Brendes), a Russian seeker who’s main dream is to make it all the way to London (pre-Brexit of course). They more or less fall in love, or what resembles that process the most in such place and under such circumstances. Bipul, we know well, we all the time know, cannot leave the center; he’s affixed to it with as much force as the core of his being is lost. He embodies nowhereness as such, a multi- without anything stable to hold on. He can’t remember his name, or where he comes from; he’s a multilingual with no mother tongue, a cosmopolitan without a birthplace, a people person with no reliable personhood. The main connector in this story lacks any connection to his own self. He is the perfect seeker, for no noun precedes his title — he can’t seek for asylum for he doesn’t recall what is like to have or lack one. His lack of recollection is equivalent to his lack of desire, and thus of expectations. This lack will drive his relationship with Lidia, however much his body may disagree with him.

Riche’s Problemski Hotel comes unwittingly timely (it was conceived before the refugee crisis really kicked in), as it gives us a penetrating view into what is like to be in a non-place, a literal limbo dwelt by non-beings — what it means to make time in a purgatory for citizenship. Whoever still may hold “these people” as freeloaders still have no idea there’s no way in the world anybody could subject their self to such process having any other choice. Like the card game that Bipul has perfected during his time inside the center, it is impossible to derive any kind of amusement from a game that has no rules. When rules are made on the fly, the only thing they do is to make time pass by. When winning hands are all improvised, everyone involved knows they might as well have lost.

So, my deep appreciation to Manu Riche for such a compassionate portrayal of the inarticulate present to which asylum seekers are subject — for so clearly showing that the time of a refugee claimant is mollusk-like, and yet tightly contained; it looks like an octopus floating indolently inside a bloated bucket. That’s the seeker’s claim, with all our useless tentacles extended aimlessly towards anywhere the water points at, anywhere the contained current may take them. Our past pass through walls like an anonymous ghost, a haunting hologram recreating, over and over again, the scenes that sliced us off from life, that suspended our sleep by tearing our dreams apart, our rest, the rest of our lives — all left in hanging. There where nights know no rebirth mornings keep missing their wake up call. Without status, with no place, what difference does it make whether our eyes are closed? 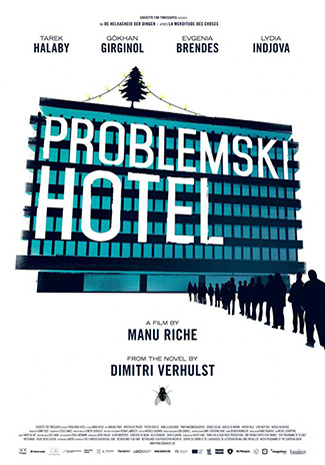