A B-actioner with grade-A action seems like a cinematic contradiction, but what better way to describe “John Wick” and its sparkling new sequel? The cheesy one-liners, stock villains, thin plot, and characters built entirely on an actor’s presence all put John Wick: Chapter 2 in B-ish territory (an easier place for shoot-em-up pics to find themselves in now that big-budget blockbusters are almost entirely concerned with costumed superheroes), but the set pieces are top notch, hurtling above and beyond even unreasonable expectations.

Every gun battle and chase sequence is complexly conceived and constructed with careful choreography that captures the cool cacophony of controlled chaos. Armed assassins charge through the labyrinthine catacombs of Rome and hunt our titular hero in subway stations below New York while the camera communicates every slick move with pointed precision. There’s no head-spinning disorientation here, only distinct spatially aware coverage of sequences that feel brimming with danger.

Keanu Reeves (“The Neon Demon”) returns as the amazingly adept assassin whose name strikes fear in all sorts of villainous types. John was pulled out of retirement in the first movie and now his sequel sends him even deeper into the dark underworld he once inhabited after granting him a mere couple minutes to entertain a second stab at retirement.

With this further immersion comes a broadening of the John Wick mythos, which is surprising at first because, um, John Wick has a mythos? The bid for what seemed like a surprisingly fun one-off a couple years ago to turn into a feisty franchise includes a considerable expansion of how the hero’s world operates.

John is one of many assassins who can be assigned jobs they’re bound to obligate and he benefits from a wide circle of support that puts fancy tailors at his disposal and provides an armory from which each assassin can assemble an arsenal. There’s a luxurious hotel that’s considered neutral territory for all the assassins, meaning that warring factions that fall under the umbrella of this mysterious organization can try to kill each other anywhere but the hotel grounds.

All of these neat ideas are explored in some enjoyable sequences, but what’s most clever about the rules is that they essentially enforce a no-collateral-damage policy that shields the movie and its gun-toting denizens from any sort of moral reprehensibility. While John spends most of John Wick: Chapter 2 shooting at trained killers who are also shooting at him, often in crowded spaces, director Chad Stahelski makes abundantly clear that average citizens aren’t in danger.

Okay, sure, it’s ridiculous, but Stahelski is so good at shooting action sequences that this never becomes visually awkward or ethically murky. If you can accept that killers are going to kill killers and that’s just fine in this world of super-assassins who pay for services in gold doubloons, then you can at least enjoy the fact that no bystanders are going to be harmed in the making of their murderous mayhem.

What also works in the film’s favor is that Stahelski and screenwriter Derek Kolstad understand the action genre and the conventions of straight-forward shoot-em-up adventures so well that they recognize all the spaces available for formula tweaks. Too often these types of actioners hew so closely to the worn template that even the minor details in certain scenes become predictable, but Stahelski and Kolstad are clearly action movie fans fed up with heroes who play only by the rules. This leads to some memorable moments that work because they simply counter the usual clichés and additionally because Reeves sells them with gusto.

As limited a performer as he is, Reeves can really click with stoic hero types that speak in clipped dialogue and otherwise let their actions speak for themselves. He fits John Wick very comfortably, but also tightly, and he’s entirely vanquished the surfer bro attitude that has plagued much of his earlier work (or benefited it if we’re talking about the “Bill and Ted” movies). John never appears prepped to utter a single “Whoa” in the tradition of Neo from “The Matrix” and he certainly wouldn’t feel compelled to say it if you asked.

Instead, he’s just a cool guy with simple motivation. All he wants is to go back to his quiet new life with his unnamed new dog, except that’s a tough goal to achieve when skilled marksmen keep shooting at you. It’s a testament to Reeves’ talent for these kinds of roles that his John Wick character has so entertainingly filled two action-packed movies with relative ease. Action heroes like this one are defined by the actor, since the script just provides sharpened edges around a cardboard cutout that a charismatic star has to color with their personality.

Reeves gives John Wick a steely intensity and electric energy that is all his own, an actor who can only do so much, but has figured out how to do that limited amount very well. When combined with Kolstad’s world-building on the page and Stahelski’s stunningly confident set pieces on the screen, John Wick: Chapter 2 is the kind of sequel that continually reminds its audience why it exists. There’s nothing wrong with being B when you look Awesome at the same time. 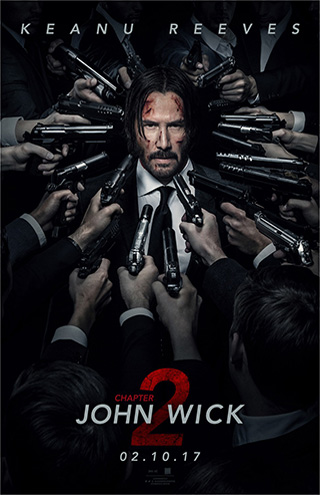