The local theater where I went to view the latest Peter Pan adventure (I found myself the ONLY one in attendance, by the way), Pan, inadvertently began showing the film “Black Mass.” I went to the manager to alert them of the error, however, two hours later, I wished I hadn’t opened my big mouth. There are at least ten different film versions of this story — originally written in 1904 by Scotsman J.M. Barrie — including a silent 1924 picture, “Finding Neverland,” “Hook,” several musicals, and a 1953 animated Disney classic (as well as an innumerable volume of Tinker Bell cartoons), but this is by far the least interesting of the bunch. Ten movies with 10 different casts over a 90-year span. Someone, somewhere has to finally say, “Enough is enough. Stop remaking, rebooting and reinventing this once-beloved children’s book already!”

Alas, director Joe Wright (“Anna Karenina”) did not listen to this humble scribbler and proceeded to put together a dark, bizarre prequel, or origins, if you will, which purports to tell us that Peter, played by cute-as-button Levi Miller (“Supergirl” TV series), was an orphan abandoned in London during World War II (you gotta hand it to that J.M. Barrie, predicting the Blitz and all, oh that WASN’T J.M. Barrie, it was screenwriter Jason Fuchs of “Holy Rollers” fame? Sorry, my bad). Ruled over by vicious, ugly, overweight nuns (remember, fat and ugly equals evil) who sell the boys to pirates in the night, Peter is whisked away on a pirate ship, no less, with British Spitfires thinking it’s some super Nazi war machine, and put to work in the fairy dust (pixum, how scientific) mines of cloud-covered Neverland.

Here, as ruled over by the wicked Captain Blackbeard (Hugh Jackman, “Chappie,” looking even more feminine than Johnny Depp as Capt. Jack Sparrow), the children are given two choices: Work endless hours in dark caves or be killed instantly. Another less than honorable punishment is to have to listen to the poor souls being forced to sing both “Smells Like Teen Spirit” and “Blitzkrieg Bop.” Songs performed in a film far ahead of their actual release timeline, who does Joe Wright think he is, Baz Luhrmann?!

Anyway, sentenced to death, Peter manages to impress Blackbeard by flying about the island — in decidedly unimpressive CGI. Evidently, he is part of a fairy prophecy about a boy who can fly leading a revolt of the natives and killing the pirate. Not too inquisitive about the prediction — and not too intelligent, either — Blackbeard simply imprisons the lad, but he soon escapes thanks to Indiana Jones-lite James Hook (yes, HOOK, Garrett Hedlund, “TRON: Legacy,” doing his best John Huston impersonation) and hijacks a schooner to the interior of the island where he meets a group of “natives” led by the afro guy from 1980s sporting events and Princess Tiger Lily (Rooney Mara, “Ain’t Them Bodies Saints”). A few less than intriguing things then take place, such as Tiger Lily explaining to Peter that he will know the truth about his mother when he submerges himself in a nearby river, because the river has somehow been imbued with his mum’s memories, and can show it all to him in the form of poorly-constructed animation. This river also has huge crocodiles and blonde, translucent mermaids (are there any other kind?).

Soon, however, Blackbeard and his crew of circus geek henchmen capture everyone and then attack the Fairy Kingdom. This sets the stage for some kind of battle which releases millions of fairies, including a brief cameo by Tinkerbell, who swoop in and actually contribute more to saving the day than our lame heroes do. As an epilogue, Peter goes back to the war-torn orphanage and brings all of his former pals back to the island.

Before the credits roll, though, we not only get the same last line in the book, “Second (star) to the right and straight on ’til morning,” but also, “We’ll always get along, right, Hook?,” which seems to be hinting an unwanted and unnecessary sequel. With not-so-special effects and computer graphics which do not live up to the hype, there’s really no reason to even see Pan in 3D (let alone at all), despite the trailers which try to make it seem irresistible. It isn’t.

Besides all of this nonsense, there’s even a not-all-too-unsubtle relation to the original ““Star Wars” film. Joe Wright, meet George Lucas, now get lost, boy. 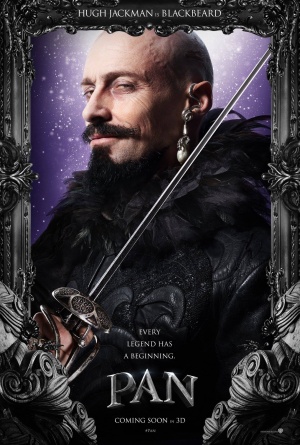