Adi Rukun is a man who wants to look — but no one else would look back. He’s a middle-aged optometrist who wants as much to look as he wants others to do so. He’s as well the flipping side of the coin of Anwar Congo, the perpetrator and protagonist of Joshua Oppenheimer’s brilliant “The Act of Killing.” His follow-up, the just as brilliant (and just as relevant) The Look of Silence now focuses on the side of the perpetratee, the perpetrated — a grammatical shift into the passive voice . . . the voice that looks and suffers in silence what those that are not looking do and keep doing.

As Adi tests different prescription lenses on his patients’ eyes with a rather rustic optical device that very much resembles low-budget vintage motorcycle goggles we get a taste of what deliberate blindness looks like. Have I mentioned, by any chance, that these patients are, also, incidentally (parenthetically), peripatetically perpetrators, murderers who participated in the killing of Adi’s older brother Ramli? A brother who, by the way, he never got to know. His is the most difficult job in a place that wants to keep living in denial.

It’s hard to believe how much the trivialization of politics can undermine the concept of human responsibility, how much the fact of never been held accountable of some atrocious action, of actually having been rewarded for it, can end up in a monstrous sense of numbness, which is the way people seem to relate to each other in Adi’s village, a sort of isolating comfort that prevents everybody from talking the untalkable and thus taking tall risks by tackling what should never be tackled: The past. When Adi tries to talk (not to confront) about what happened during the massacres of Snake River wherein his brother was brutally tortured and killed, no perpetrator shows qualms about providing details (we know this from Oppenheimer’s previous film), but they seem shocked when Adi reveals that his brother, Ramli, was one of the murdered ones. Hence when Adi tries to talk about the past by taking a different angle, his interlocutors, even those who didn’t partake of these atrocious killings (neighbors, other survivors, etc.), dismiss him as they state that he’s “talking politics” — which is clearly forbidden for non-politicians (and, by proxy, for non-military men) in this state . . . by the State.

Politics thus stops being the realm of coordinated action (as Hannah Arendt, and Aristotle before her, would have it) to become a state of coordinated fear. Everybody seem to fear the consequences of “talking politics,” but also everybody seems to know how futile this risk is, for “talking politics” has become a synonym for “talking terrorism”; it reveals a potential protester plotting against the existing order — which took so many murders, so many sacrifices (the perpetrators’ of course) to reach. Change is the real danger for those who will to live in denial. When history is something that cannot be looked at straight in the eye, politics turns into the factual forbidden fruit. Not looking at one’s country’s history means doing politics in the dark — perpetually.

But, risking the digression, and even risking the overall integrity of this review, let me talk a little politics here — I will do so even at the risk of talking terrorism. One of the greatest achievements of Oppenheimer’s work, and one of the main reasons why The Look of Silence comes in such a timely fashion, relates to the current situation in Syria — a conflict currently branded as a humanitarian crisis. Of course, this is not to insinuate this is not a humanitarian crisis. Certainly, this is not to suggest in any way that refugees do not need our help and should not be receiving support from any country that can offer it. That is our responsibility. Yet it is also our responsibility to be critical with the political marketing of this crisis.

How come that this situation has been labelled as the “worst humanitarian crisis since WWII” and something like what happened in Indonesia, with four times the casualties in Syria in just a one-year timeframe, was kept completely under the radar? How come the Indonesian regime has never gotten any public condemnation and the victims received no international support? How could one of the biggest genocides in history (roughly about 2800 people killed every day for about 365 days) have had so little international impact? Is it perhaps because the murderous paramilitary and military coup in Indonesia was supported by the US (since they were killing “communists”) whereas the existing tyranny in Syria opposes the US interests? Could be, but these are only questions.

Questions are, nonetheless, a serious threat when all answers have been already given — however unconvincing or straightforwardly full of bullshit. “If you want to keep looking back to the past, it will certainly happen again,” says one of the paramilitary leaders to Adi, insightfully reversing the well-known formula about the importance of knowing one’s history. He’s issuing a threat almost as though it had been issued by History itself. Still, though this reversal sounds offensively stupid, one cannot help but fear for Adi’s life, for his family’s and kids — and a fleeting thought of safe cowardice crosses our minds: “Man, protect your family. Stop! you’re a doctor; you’re doing alright; you don’t need this.” But how wrong this thought is.

Adi needs to look and aid others to look back; this is his true vocation — being an optometrist is but a happy accident. He’s aware that his very existence is the product of a most unhappy act: His mother birthed him to replace her murdered son and to help her not to go mad with grief. His father though was not as lucky. A man whose body rebelled against his longevity, Adi’s father (now deaf, blind and senile) is the embodiment of a grief that never got to settle. And Adi acknowledges being the product of such grief: A seed at the midst of a bulldozed garden.

Oppenheimer’s presence is less strong in The Look of Silence than in “The Act of Killing.” Here, it is almost as though the other, “Anonymous” director working hand-in-hand with him were Adi himself. This is the strong presence in the film, the solitary hero. His stare is a stair out of the collective abjection everyone around him seems to be living in: His wife, his mother, his father, his neighbors, his village. Only his children bear the chance to live a life out of this national state of denial. It all seems to indicate this is what he’s really after. For the present in which he lives is overwhelmed by this extreme form of abjection that admits no adjectivation — it is its own abjective. They all live a life as if trying to keep away from the madness that reigned during that abject year of 1965, and how hard they’ve worked so as not to go mad: From replacing dead sons to drinking their victims’ blood — it all didn’t work very well. Madness only settled down in the form of fear.

So it is in the form of the coming generations that hope flies in these regions. It comes in the shape of a generation meant to replace the repressed, silenced, exterminated generation that preceded it. Indoctrinated maybe, but likely more free of fear — yet this is just a hope that Adi has and Oppenheimer shares. The next generations, the generations to come, are all butterflies in the making, jumping around in the self-made womb of their cocoon like little lively pebbles hopping in front of Adi’s kids eyes and over his mother’s hands. And some hope peeks from a rather unusual scene. It is as Adi talks to a senile perpetrator assisted by his daughter, very much around Adi’s age, that we finally look at some sense of remorse by way of an acute sense embarrassment. This, of course, doesn’t come from the father — he can barely remember why he’s there — but from the daughter, who seems genuinely distraught by the information she’s likely listening for the first time (with so much detail) from her old man’s mouth. If there will be no catharsis in The Look of Silence (how could there be?), there is at least some little gleams of hope, such as in the scene just described, when we look at two people simultaneously forgiving someone who knows not forgiveness.

“The past is the past,” repeats Adi’s mother, caught in an odd kind of unilateral forgiveness. Forgiveness, this film shows, is for the lonely only; it isolates the forgiver from the rest of the world — certainly from the forgivee, the forgiven . . . another shift into the passive voice. Those who refuse to look back, who’d very much rather repeat or forget the past, continue to deny what their memories have to offer: A look back, an act of reciprocation. “Help! Help! I’m in a stranger’s house,” we look at Adi’s father yelling in despair while crawling around a room at the back of his lodgings. His cry for help, however, does comprise the collective history of his country, of Adi’s country, which is visibly in an uchronic state of senility. Denying one’s past is like gradually estranging oneself from one’s house. And this is what Adi fears even more than losing his life, forgetting to the point of never being able to forgive again. “Anonymous” may have lost their right to sign, but have not lost at all their right to remember. Oppenheimer knows it, for he has learned it with Adi: Only those who remember can forgive. Only those who forgive can see. And only those who see can look and look back — can find their way back home. 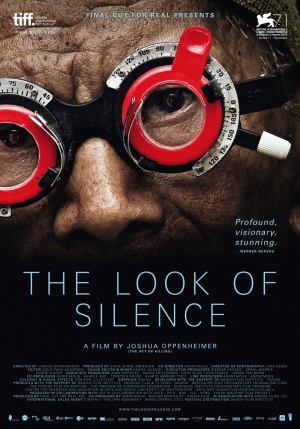